Billy Robinson memoir out in spring 2012

Coming in the spring of 2012 is the life story of Billy Robinson, Physical Chess: My Life in Catch-As-Catch-Can Wrestling, and it promises to push and pull readers in many different directions.

Not one to brag about something where he can’t break bones, Robinson matter-of-factly said, “It’s about my early days in wrestling.”

The British wrestling legend and member of the Pro Wrestling Hall of Fame (Class of 2011) is teaming with author Jake Shannon on the book.

“It is the story of Billy’s life in wrestling, from growing up in a fighting family, to traveling the world wrestling, and to his exploits in both pro-wrestling and Mixed Martial Arts,” Shannon told SLAM! Wrestling. “The book is done and being edited now.” 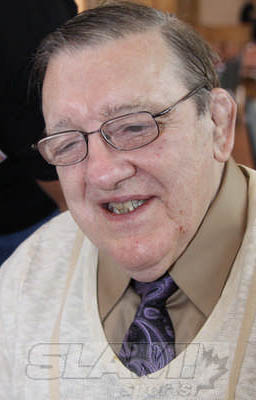 Billy Robinson in May 2011 at the Pro Wrestling Hall of Fame induction weekend. Photo by Larry Minervini.

Doing the editing at ECW Press is Michael Holmes, who also shepherded Shannon’s Say Uncle! Catch-As-Catch-Can and the Roots of Mixed Martial Arts, Pro Wrestling, and Modern Grappling to press.

“I wanted to publish it because I was fascinated by Billy’s stories, and because he bridges the gap between the histories of pro wrestling and MMA,” said Holmes.

Robinson said that the idea for the book came from Shannon, who has been booking the star of the 1974 film The Wrestler in seminars around the world.

“In the seminars, I keep on getting questions, and Jake taped the questions and answers and stuff, and decided to put it together,” said Robinson.

Holmes shared the sales blurb for the book as well:

Physical Chess: My Life in Catch-As-Catch-Can Wrestling is the story of one of the most legendary men in all of professional wrestling and mixed martial arts, Billy Robinson. In this fascinating autobiography, Robinson recounts his upbringing amid a family of champion fighters (wrestlers and boxers), his worldwide travels as a wrestler, his time as a professional wrestling television star, and his career as a coach of some of the biggest names in mixed martial arts.

This memoir fills a crucial gap in the history of the sport of catch-as-catch-can wrestling while simultaneously sharing the intriguing details of Billy’s life, in his own inimitable voice. Starting with his working class childhood in post-WWII England through his career as a top-card professional wrestler and ending with his current career as a highly sought after mixed martial arts coach, this autobiography leaves the reader with the feeling of having shared a few intimate afternoons sipping tea while listening to a legend.

In Physical Chess: My Life in Catch-As-Catch-Can Wrestling, Robinson sets the record straight as to: