Serge Saumon (Serge Daigneault), who died at age 52 on August 8, 2011, in Montreal after a brief battle with cancer, was never considered as a legit main eventer or as a “world” champion. But it didn’t matter for him. He wasn’t wrestling to make a living out of it, he didn’t wrestle to be a champion; he wrestled because he liked to perform in front of a crowd, he liked to entertain the fans, but also to entertain his co-workers. 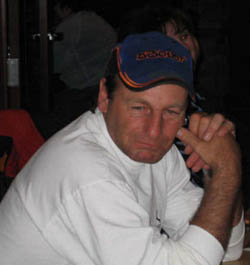 “Serge Saumon wasn’t the best technical wrestler, but he knew how to make a crowd react, how to entertain that crowd. What would describe Serge the best is that he was an entertainer in and out the ring,” said well-known female wrestler LuFisto (Gen Goulet), who wrestled in the same ICW promotion as Saumon for years.

Just a few months ago, he was diagnosed with a lung cancer. Unfortunately, it was already too late for any solution and as quick as it came, Daigneault lost the battle even before the bell rang.

“He was way too young,” expressed ICW’s owner Ludger Proulx about the lost of Daigneault, who wrestled for him for 13 years.

After he started as a referee with a rival promotion, Daigneault started with what would become his home promotion, ICW, in 1997. He won several tag team championships and one hardcore title as well, but was more a mid-carder than anything.

“What he knew as far as technical wrestling, he knew it well though,” said LuFisto, who owes Daigneault one cool feat. In 2001, Sexy Julie and Precious Lucy (LuFisto’s former name) won the ICW tag team titles against Saumon and Nico le Prince, becoming the first and still to this date, the only female tag team to win a men’s tag team titles in the province of Quebec. If losing to a girl is sometimes frowed upon for a man in the wrestling circles, it wasn’t for Daigneault, whose goal was first and foremost to give the crowd what they wanted.

“One other time, someone didn’t show up for an Evening Gown match and Serge stood up and got dressed and was put make-up on so he could look like a woman!” added LuFisto about one of the best showman Quebec indy wrestling has known.

Everyone agrees that Daigneault was one of the funniest guys on the Quebec scene.

He was beloved by everyone who met him and it actually showed last Sunday, as many former ICW wrestlers were there for his funeral. Even some of the most loyal fans didn’t want to miss the chance to say a last goodbye to Daigneault, among them, a 90-year old lady who has been an ICW fan for the longest time.

Daigneault’s last match was at the beginning of the year, not for the promotion that he wrestled all his career, but for another one in the same neighbourhood, CTW. He will be missed by his girlfriend Nathalie, his children Pascal and Seka, many family members and many members from his second family, the ICW.

Next Friday, August 19th, ICW will present a special show in memory of their friend. For more information, you can visit its website at www.icwquebec.com.