LOS ANGELES — The roster for the annual WWE video game franchise was unveiled this past SummerSlam weekend at the WWE Fan Axxess event outside of Staples Center. What makes this year particularly special is game developer THQ’s re-branding of the game from the annual Smackdown Vs. Raw series to WWE ’12, falling in line with other sports franchises like the Madden football series. 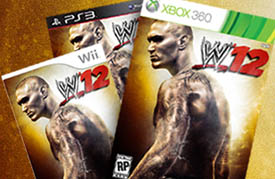 Thanks to the fine folks at THQ, the Monday Night Mayhem crew and myself were invited to take part in the WWE ’12 Ultimate Community event and check out the game, up close and personal in L.A. For me, this was wrestling game nerd manna as I have faithfully followed THQ’s wrestling game endeavors since WCW World Tour for the N64. I can confidently say that THQ has far surpassed expectations in terms of a revamped game play engine and new create modes to make even the most jaded gamer happy.

The aforementioned new game play engine is a step up from last year’s Smackdown Vs. Raw 2011. The grapple function has been assigned to the controller face buttons in correlation the left analog stick (or D-pad) that you use to move around your Superstar. This harkens back to the 2006 version of the game that used this same method to maximize the amount of unique moves that your character could possess. The game pacing as a whole has been retooled, evident when WWE ’12 Senior Creative Manager Cory Ledesma showed us a side-by-side comparison to last year’s game. Everything feels very fluid and realistic, right down to the selling in-between maneuvers.

There is also a renewed focus on limb damage for those players who prefer to utilize submissions. Pressing a trigger button brings up a sub-menu indicating how a Superstar can inflict area-specific pain, enhancing the effectiveness of the submission moves as you wear your opponent down. The renewed emphasis on newly dubbed “Breaking Point” submissions lets Superstars like Daniel Bryan and his Lebell Lock finisher standout as formidable characters in one-player match-ups.

A considerable amount of heightened drama has been incorporated into the game play with the addition of a Kick-Out Meter. Whenever you are in a pinning predicament, a meter pops up that requires you to hold a button down until it reaches a point where you can let go and you will kick out. The success point gets smaller and the meter fills up faster as you wear down during the match, making it increasingly difficult yet infinitely more satisfying when you do hit the right point and escape a loss. It’s like you’re Johnny Ace backstage in WCW, booking false finishes and having a blast.

The AI computer opponent is smarter and much more aggressive than years past. Most of my matches were played on the “easy” setting although it felt more like “normal.” The more you spam buttons or repeat a move, the more the AI becomes hip to your actions and adjusts its strategy. This aspect increases the game’s replay value, especially for those that get that vengeful feeling when losing to the computer in a close match. Its not all squash matches here, folks!

The WWE ’12 Superstar roster (at least what has been revealed so far) is probably one of the most diverse and accurate rosters in the history of the franchise. Granted, a good chunk of the names could be obsolete by the game’s release so this might be a premature statement. There are a few surprises, notably Husky Harris (currently in FCW), William Regal (officially on Smackdown but has not wrestled consistently in months) and Goldust (now a backstage agent). Also absent are a large number of current Divas such as Alicia Fox and The Bella Twins. 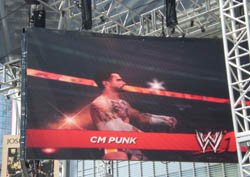 You can’t hear it in a photo, but CM Punk comes out to “Cult of Personality” in WWE ’12. Photo by John Masiulionis

Thankfully, the cut-off date for content inclusion was quite recent, allowing the THQ designers to include Superstars such as Sin Cara as well as current details like CM Punk’s “Cult of Personality” theme song and R-Truth’s paranoid persona, brilliantly highlighted in his ring entrance. The vast roster also complements the Create-A-Moveset editor immensely, adding a whole slew of accurate finishers and transition moves like Zack Ryder’s “Broski Boot” and Alex Riley’s TKO variation. For someone who freaks out over such elements like myself, the attention paid to the movesets is always a pleasure to discover.

In addition to a solid representation of the current roster, the Legends included in WWE ’12 are both surprising and satisfying, favoring more towards the old-school ’80s WWF/NWA fans. Both Arn Anderson and Vader make rare video game appearances along with popular legends like Eddie Guerrero and “Stone Cold” Steve Austin. In a huge mark-out moment for a lot of older fans (myself included), Demolition Ax and Smash will be featured as playable characters, quite possibly their first video game appearance since the WWF WrestleFest arcade game from the early ’90s. It remains to be seen if both Ax and Smash will have alternate costumes that recall previous gimmicks like Masked Superstar or Blacktop Bully. Who knows — maybe in a future Downloadable Content package? 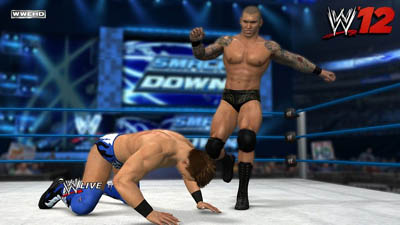 Randy Orton goes for a punt.

Finally, in one of the most anticipated mode additions since the Create-A-Finisher in 2009, WWE ’12 will boast the maiden voyage of the Create-An-Arena mode. Everything ringside can be detailed — the mat to the ring posts and even the guardrails, toggling between the black WWE barricades and the traditional steel fixtures used in years past. There are also numerous logos from all of the Wrestlemanias to WCW and AWA that you can slap onto ring aprons, announce tables and turnbuckles to recreate matches of yesteryear. One of the fellow gamers in attendance at the THQ event quickly slapped together the Wrestlemania 2 arena. I’ve already resigned myself to make the red-orange mat with turquoise turnbuckles combo of Big Time Wrestling from 1970s Detroit. Despite this being the first pass at the mode, the level of customization available is absolutely incredible and shows great promise for future incarnations.

The THQ Ultimate Community event was not without its guest WWE Superstar appearances. “The Long Island Iced Z” Zack Ryder stopped by and was greeted by a group of gamers all wearing his most recent Broski t-shirt. Ryder even played a brief match as himself in the game against The Miz (he lost). Randy Orton and Alex Riley also visited, with Orton talking about his recent X-Box 360 gaming experiences on his tour bus.

Without a doubt, WWE ’12 will redefine the professional wrestling video game landscape. Keep in mind that we are barely scratching the surface, with more information to come on the depth of the Road to Wrestlemania single-player game as well as the tweaks made to the WWE Universe mode that follows the ongoing schedule of RAWs, Smackdowns and PPVs. From what we were able to experience thus far, the game play is intense and challenging yet still fun and rewarding. The Create-An-Arena mode will be a huge hit amongst the WWE online gaming community, who will undoubtedly put forth some unique creations. 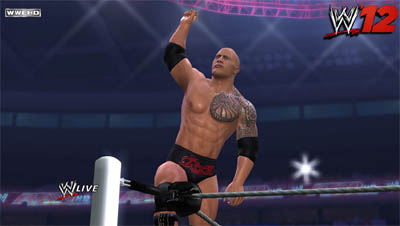 You need an exclusive code to unlock The Rock as a playable character.

WWE ’12 will be released on November 22 for Xbox 360, Playstation 3 and Nintendo Wii. For the first time, the game will not be available for Playstation 2 and hand-held consoles, meaning that if you want to experience this game, you have to go to a next-gen console. Pre-ordering the game will get you an exclusive code to unlock The Rock as a playable character.

Shawn Marek can be emailed at [email protected] or can be found on Twitter at @AngryHeroShawn. Also please check out www.MondayNightMayhem.com for exclusive interviews with past and current wrestling stars.