B.C. show to pay tribute to All-Star vets past and present

The glory days of Vancouver’s All-Star Wrestling will be celebrated at a tribute show on Saturday night at the promotion’s old stomping grounds of the Cloverdale Fairgrounds.

“In Honor and Respect” has been put together by Terry Tomko, son of the late promoter Al Tomko.

He’s been quite thrilled with the responses so far to the concept, which will have some current matches, live music and tributes to legends who have passed and many still limping around.

“I was putting up posters with some youngsters, and this guy comes running out of this gas station. He was buying a pop. He went, ‘I remember, I remember!’ He sees Al’s picture on the poster, and he starts talking to me,” said Tomko in his familiar voice that he rasped many an interview in, on BCTV. “He’s looking at me — and I hadn’t said a word yet, and I’m standing there in my neck cast [after surgery in June]. He says, ‘I remember a match with’ — he looks at me and says ‘The Frog?’ So it was pretty cool. Stuff like that happens all the time.”

Tomko insists that the All-Star days still resonate “huge” with folks on the west coast.

“Whenever I talk to people, whenever I bring it up, they always say, ‘Oh yeah, All-Star Wrestling. You’re talking about Al Tomko? You talking about BCTV?’ That’s what the majority of people say,” he said. 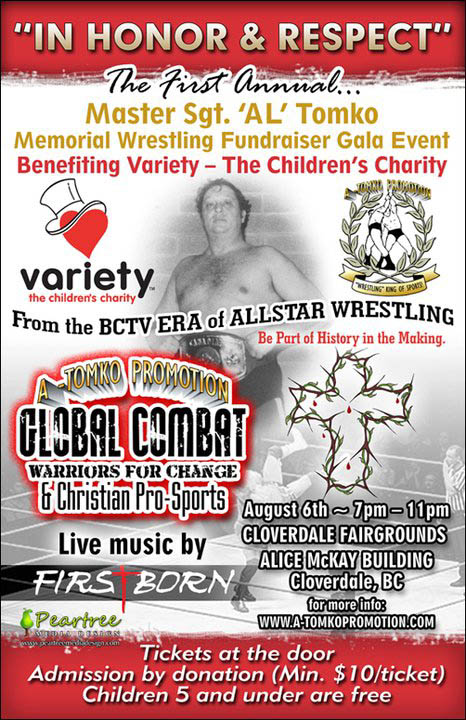 Promoted under the twin banners of A Tomko Promotion and Global Combat ~ Warriors for Change, the show was a long time in the making.

“It’s a lot of things that have come together, mixed with a lot of prayer and direction,” admitted Tomko Before my dad died, I had thought about getting back into wrestling, in the promoting aspect, but really wanted to look at the direction I wanted to go. I looked more along the lines of doing something in the aspect of something that makes a difference, not just putting on a show like many others do, doing something that honours God. There have been other organizations out there, whether it’s Ted DiBiase, or some of the other ones that are still out there, that have done some shows in that sense, to use wrestling to spread the Word and make a difference.

“So that’s one aspect. Then after dad died, a lot of the wrestlers around here, we used to talk, and we’d say, ‘One day, what about putting on a show, just a memorial show for Al?’ It’s coming up two years.”

The initial concept was a memorial show for his father.

“Once I got straight with, well, I’m going to do it, then making it that commitment, it really took a life of its own, actually. This event is, as far as I’m concerned, nothing less than a miracle as far as what’s taking place. People have stepped on board, giving their time, giving their talents, giving their services, in every aspect possible.”

The show grew to the point where Tomko considers it about “the recognition of Canada’s pro wrestling industry.”

To that end, respects will be given to names in the great ring in the sky, like E.T. Stanton, Earthquake / Big John Tenta, Sgt. Al Tomko, and Bud Wells, the long-time All-Star photographer.

Those being honoured will include Don Leo Jonathan, Moose Morowski, Dean Ho, Freddy Baron, “The Mighty Mennonite “Bob Harms, Jay Clinstock, and referees Gary “The King” Allen and Suzie Tanner. Veteran Kevin Jefferies will act as host for the evening.

“They’re being given honours for their contributions and the route they paved in the business,” said Tomko, who also stressed that The Frog will not be making an appearance.

Proceeds of the show, which starts at 7 p.m. at the Alice McKay Building at the Cloverdale Fairgrounds, will go to Variety – The Children’s Charity, and Tomko is hoping that people will be generous, especially given that admission is by donation, with a minimum $10 per ticket, and children five and under are free.

It’s been a fun ride for Tomko, regardless, given that it has been almost 25 years since he last promoted a wrestling show, and that was in Winnipeg.

“It’s a whole new world with all this technology,” said Tomko, still up in the wee hours of the morning, finalizing a number of things before the show. “It’s the same game, just worded a little bit differently these days in some ways.”