Devon “Hannibal” Nicholson has taken his feud with Abdullah the Butcher from the ring and the media into the courtroom. On Monday, Nicholson filed a suit against Larry Shreve (Abdullah’s real name) in the Ontario Superior Court of Justice, charging negligence, assault, and battery.

Nicholson learned of his infection in mid-2009. In September 2009, World Wrestling Entertainment pulled a three-year contract offer to Nicholson, allegedly on the basis of his disease.

Over the past couple of years, Nicholson has been collecting thoughts from wrestlers about the use of blood in matches for a documentary entitled Don’t Bleed On Me. 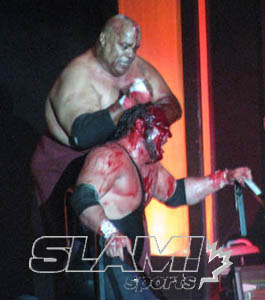 Abdullah the Butcher and Devon “Hannibal” Nicholson fight it out on the stage at the Super Ex Showdown on August 23, 2007, in Ottawa, Ontario, which is where the alleged mixing of blood took place. Photo by Sandra Garrido Arciniega

Originally from Windsor, Ontario, Shreve carved out a legendary career as Abdullah the Butcher, a maniacal wrestler bend on destruction and drawing blood from opponents. He lives in Atlanta, Georgia, and runs a restaurant.

According to Nicholson, his lawyer met with Shreve in September 2010 in Atlanta, and Shreve agreed to provide his blood work. Yet, the suit alleges, Shreve never provided the promised sample or result.

On July 17th, Shreve posted a note on his Facebook page: “I received my medical reports; I have NO hepatitis, or AIDS and anything. My blood tests are ALL negatives then these fools will be prosecured in justice… Hannibal, Billy Graham and especially New Jack, the most vulgar Boy whom business knew!”

Ronald Caza, a partner at Heenan Blaikie, is representing the 28-year-old Nicholson.