It’s pretty common knowledge that Brock Lesnar is an extremely private person, and this statement has never been more evident than in his new autobiography Death Clutch, in which he states: “When I am on the job, I am there to entertain you. But when I’m not on the job I don’t owe anything to anybody.” 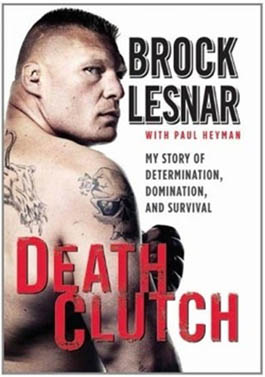 Death Clutch, which came out in late May and is co-written with Paul Heyman — yes, that Paul Heyman, is a lot like Lesnar — not your average Joe, or read.

Over the years many autobiographies have been used as a way to share a feast of insight and dish the dirt on former employees. However when given his chance to do just that, Lesnar has chose to play his cards deceptively close to his chest.

One of the most interesting parts of the book is Lesnar describing his apparent hatred for the wrestling business, constantly referring to what Curt Hennig told him, “Get in to get out.” It’s evident that he hated the travel schedule, while getting on with his co-workers he never really trusted them and that he detested the politics of having to constantly shake hands with every guy in the locker room upon arrival, even though he would have only seen them a few hours ago.

Other plus points are that Lesnar gives a pretty good picture of Vince McMahon’s mind games; he also reveals an intriguing insight into the fact that during his run with WWE, he was taking quantities of Vicodin and washing them down with vodka. He also talks about his long legal battle he had to engage in to regain his freedom after foolishly signing a lengthy non-compete agreement when he left WWE.

Lesnar had a whirlwind career in WWE and while some issues are explained, there isn’t much detail on offer here at all. In fact there are too many things that are glossed over, which doesn’t come as much of a surprise, seeing as the book is only a mere 210 pages long.

In-ring descriptions are something which are severely lacking. One of the matches that has undoubtedly been talked a lot about over the years (and not in glowing terms) has been his battle with Bill Goldberg at WrestleMania XX. While Brock tells us that he was originally supposed to squash Goldberg in 30 seconds, before giving the company his notice. The details of the unbelievably surreal scene that took place at the world’s most famous arena, Madison Square Garden, that night are completely missing, leaving fans with more questions than answers. What happened after the contest? What were both he and Goldberg thinking during the bout? We may never know.

If you are in fact a fan of his MMA career then you may feel a little short changed as well. Similar to the pro wrestling chapters, not much is mentioned in the way of his current stint in the UFC. He does unload quite honestly in his opinion of Frank “Golden horseshoe up his ass” Mir and his thoughts on his loss to Cain Velasquez; everything else is really just glossed over.This book could have been one of the top wrestling/MMA autobiographies out there, if Lesnar had allowed himself to let go and be more vocal. On the contrary that just isn’t his personality.

While the book flows nicely and there certainly are no dull moments, Death Clutch will leave readers gasping for more. However, if you’re a fan of a more in-depth read and enjoy hearing about a worker’s career in great detail, from road stories to their honest thoughts on matches, then I would suggest giving the book a miss.