Ron Hall is the author of the book. The name may sound familiar as Hall is also an executive producer of the documentary Memphis Heat: The True Story of Memphis Wrasslin’, which was released earlier this year to positive reviews.

Part photo album and part newspaper and magazine clippings, Sputnik, Masked Men, and Midgets: The Early Days of Memphis Wrestling is a 200-page coffee table book that offers a glimpse into the storied past of Memphis Wrestling, also commonly referred to as the Tennessee territory. The introduction is written by Jerry Lawler, which details his early days in the territory. 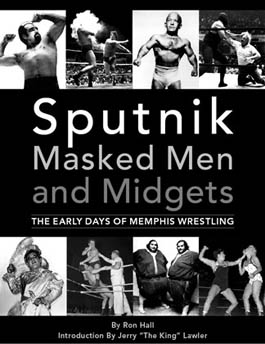 The book contains numerous wrestling cards and programs along with nearly 400 pictures dating back to the early 1950s through the late 1970s. The wide assortment of images ranges from action shots of Sputnik Monroe and Mae Young to Terrible Ted the Wrestling Bear and Elvis Presley singing in the middle of the ring.

Long before Jerry Lawler battled as “The King” at the Mid-South Coliseum, fans witnessed the likes of Farmer Jones, Billy Wicks and Al “Spider” Galento battle it out at the Ellis Auditorium in downtown Memphis.

The book is divided up into themed chapters that highlight specific time periods and gimmicks that were Memphis mainstays. Hall also includes a variety of wrestling programs and newspaper articles from the era.

One particular article dated January 14, 1960 breaks kayfabe in a major way. The story reveals Sputnik Monroe’s real name and home address while detailing his arrest for drinking a beer in a “negro cafe” the prior morning.

There are also quite a few gems such as pictures of music records released by Monroe, Jackie Fargo, Lawler, Len Rossi, Jimmy Valiant, and Plowboy Frazier. As a bonus, enclosed is a CD containing some of the recordings pictured within the book. The four tracks are:

Obviously, Sputnik, Masked Men, and Midgets: The Early Days of Memphis Wrestling contains several pictures of the infamous feud between Lawler and Bill Dundee, which helps round out the book.

The impact of Memphis Wrestling is profound. Throughout the decades, the territory churned out a proverbial who’s who in the wrestling business. In fact, some of WWE’s current superstars cut their teeth in the Tennessee territory: The Undertaker as the Master of Pain, Kane as Doomsday and The Rock as Flex Kavana.

However, the tape library is one of the few WWE will never acquire the rights to. Why? The short answer is a significant amount of the early Memphis Wrestling master tapes were either taped over, destroyed or have simply disappeared. What remains is scattered among a multitude of individuals. Furthermore, Lawler filed a lawsuit last year against Corey Maclin for selling the rights of Memphis Wrestling footage to Highspots.com.

I would be amiss if I also did not mention the fiasco involving the lawsuits that were filed by Mark Selker regarding the United States Wrestling Association (USWA), which is a story unto itself. Supposedly, Selker still holds the rights to the USWA footage although that remains unconfirmed.

I mention these details simply because what footage remains of classic Memphis Wrestling is generally of lower quality, and the official owner of the rights may never be sorted out.

Therefore, Sputnik, Masked Men, and Midgets: The Early Days of Memphis Wrestling is a nice montage that tells the story of early Memphis Wrestling through old photographs and original periodicals that I highly recommend.