Sometimes the best interview is not an interview at all.

“It’s a conversation,” Colt Cabana says of his podcast, The Art of Wrestling, on which he shoots the breeze with a different wrestling comrade each week.

“I want it to feel like you’ve opened a door and walked into a room where two guys are just talking.” 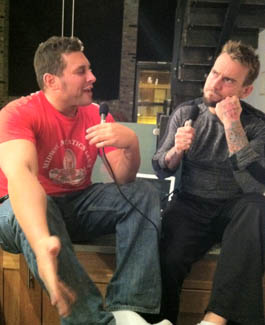 It’s a simple philosophy that yields compelling results — behind-the-scenes tales from the wrestling world that are candid, occasionally touching, and often hilarious.

Contrary to the countless mudslinging “shoot interviews” on the market — in which a wrestler is bombarded with meticulously researched questions posed by some unseen, nervously stammering interviewer — Cabana’s podcasts are refreshingly breezy and spontaneous.

Because Cabana himself is a wrestler (a 13-year veteran of the indie circuit with notable work in Ring of Honor and a brief, ill-fated sojourn in WWE under the moniker Scotty Goldman), he understands the inner workings of the business and isn’t digging for dirt.

More importantly, he has travelled with, and wrestled against, nearly all of the guests on his podcast, so little time is wasted on getting-to-know-you niceties.

His guests, in turn, invariably open up and share stories that you’re unlikely to hear in a typical interview with a journalist.

Take Evan Bourne, for example. Whereas Bourne has, in previous interviews, come across as a vapid, albeit smiley, mouthpiece for WWE (as evidenced by this cringe-worthy chat with John Pollock), he speaks openly on Cabana’s podcast about, for instance, being a huge fan of gore-splattered deathmatch wrestling.

All of Cabana’s podcasts — of which he has recorded nearly 50 since launching The Art of Wrestling last summer — shed light on interesting, absurd or otherwise unknown tidbits from the strange circus of pro wrestling. To name a few:

That last one, Luke Gallows, turned out to be one of Cabana’s most popular guests to date, thanks to a razor-sharp sense of humour that Gallows was never able to unveil on WWE television.

While most fans remember Gallows as the strong, silent type in the Straight Edge Society, or the redneck idiot savant Festus (or even briefly as Kane’s imposter), only fellow wrestlers knew about the funny, well-spoken man behind the characters, Drew Hankinson.

“These are the guys I’ve been travelling with for years so I knew how funny they are,” Cabana tells SLAM! Wrestling over the phone during a five-hour drive from an indie show back to his Chicago apartment. “I know how funny Gallows is, and everyone in the locker room knows it, but I want everyone to know.”

Making people laugh was one of Cabana’s driving motivations when he decided to launch his own podcast. He’s an admitted “nerd and fanboy” for stand-up comics — particularly the undiscovered, underground comics whose lifestyles are strikingly similar to those of indie wrestlers — and he often passes the time during long car trips by listening to comedy podcasts.

Inspired by comics like Marc Maron — whose popular “WTF” podcast sees him talking shop with fellow comics about their unusual profession — Cabana bought some microphones and a digital recorder, which he then began toting to his many wrestling bookings.

He records the podcasts anytime and anywhere — sometimes in the locker room of some high school gymnasium, sometimes in a rental car or hotel room, and frequently in the comparatively comfy confines of CM Punk’s apartment, since Punk is a close friend who lives a couple blocks away from Cabana. During one recent podcast, in which Cabana chatted with Cliff “Domino” Compton, Punk can be heard laughing and shouting comments while rearranging furniture nearby. (Punk gave Colbana a shout-out in his promo Monday night on Raw.)

While the podcast has showcased the personalities of dozens of wrestling stars, it has also breathed new life into Cabana’s career. For a time, shortly after WWE decided to “wish him well on his future endeavors,” Cabana wondered if he should find a new line of work.

But the podcast has gradually raised his stock, at least in the independent wrestling world, as more and more people download the podcast from iTunes every week. 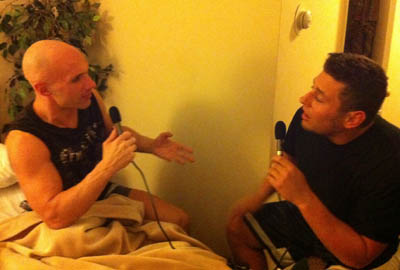 Christopher Daniels and Colt Cabana have a conversation on The Art of Wrestling.

Though he’d rather not divulge actual numbers, he says anywhere between 10,000 and 30,000 people download each episode of the podcast, and the positive feedback keeps rolling in. As an added bonus, Cabana no longer needs to pester his fellow wrestlers into appearing on the show — they’re now approaching him, asking when it will be their turn.

With the podcast, Cabana has carved a unique niche for himself in the wrestling business. It’s not a lucrative niche, mind you, since it’s a free podcast with very limited payoffs in terms of advertising and merchandizing.

So while he loves what he’s doing, Cabana confesses that allure of a bigger paycheque — which, in the wrestling business, means one signed by Vince McMahon — is hard to ignore.

“I do fear that the only place to make real money in wrestling is WWE,” he says. “I mean, I’m able to eat and pay my rent, but I look at my best friend (CM Punk) and he’s a millionaire because he’s in that company. Every day I struggle with whether I should pick up the phone and call (WWE) and ask for a job.”

For the time being, however, Cabana is happy to follow the unique path he has forged for himself — wrestling on as many shows as possible and recording a new podcast with an old pal every week.

“It’s really rejuvenated my career, my creativity, my inspiration,” he says of the podcast. “And I do it to showcase my friends, and help them show a different side of themselves. In the selfish world of pro wrestling, I like to think I’m doing an unselfish thing.”