As the U.S. news outlets focus upon Tea Party-backed candidate Michele Bachmann entering the fray to become the Republican Party Presidential Nominee on Monday, June 27th, most of her fellow Republican challengers are quivering with fear, and not just because she might have accidentally compared herself to John Wayne Gacy. As Bachmann overtakes her rivals in states like Iowa, one of her Republican challengers is not afraid of her: professional wrestler Jonathon “The Impaler” Sharkey. 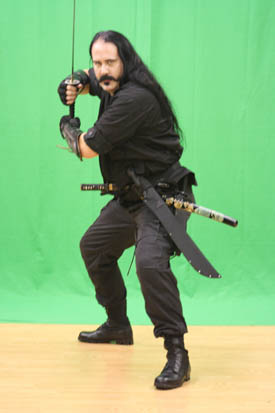 Sharkey hopes to give Bachmann, Mitt Romney, and the other Republican front runners a run for their money. While the 47 year old might be a recent entrant into the G.O.P. Presidential mix, he has been wrestling since 1988. Getting his start with Larry Sharpe’s WWA promotion in a boxer vs. wrestler match, he faced former Can-Am Wrestling Champion “Diamond” Jim Brady. Since then, he has worked for a number of local promotions throughout the U.S., including with The Rock’s father, Rocky Johnson. While he currently wrestles as a Vampire, his greatest influences could not be more different than his wrestling persona.: “Ric Flair and Ricky “The Dragon” Steamboat. I used to train with Ricky at his old gym in North Carolina.”

While wrestling is his passion, he has always been interested in politics. Like most Republicans, he says his favorite President is Ronald Reagan. “Ronnie was the best President in modern history.” In fact, Reagan was the first President he ever voted for. There are myriad reasons as to why Sharkey wants to become President. “I am tired of seeing Americans, especially veterans and the elderly, sold out by the political establishment,” Sharkey told SLAM! Wrestling via an email interview. “Congress and those in power are getting yearly cost of living increases, but not disabled veterans and those on SSI and Social Security.”

Sharkey’s political zeal has sometimes got the better of him, such as when the Secret Service paid him a visit for allegedly making a veiled threat against then-President George W. Bush. But Sharkey is no fan of the current U.S. President, either. “Obama is even worse than Bush, and I never thought anyone could be worse than Bush. He has no idea how to run a country, nor should he be running a country,” Sharkey exclaimed.

Unlike some other candidates who dodge political history questions or answer them incorrectly, Sharkey is ready for any so-called “gotcha” journalism. The Impaler will not be “got.” Born and raised in New Jersey, he mentions with pride that it was “the 3rd State to ratify the Constitution. My Jersey ancestors fought to make this country great, but, their deaths are in vain, given the actions of the last 20-plus years of the politicians in DC.”

He is not one to shy away from controversy, either. If he becomes President of the U.S., he also hopes to become its High Executioner. “As President, I will execute via Impalement those who commit acts of terrorism against America and/or Americans, as well as those convicted of rape, murder, animal abuse … child abuse and/or child molestation, abusing or taking advantage of the elderly, DWI/DUI on the third conviction or upon causing bodily injury or death,” and other offences.

Sharkey took the time to answer questions on various policy issues for SLAM! Wrestling. While some of his responses place himself in the very conservative right wing of the Republican Party, such as opposing abortion and wanting evolution to be banned from being taught in public schools, he is very much to the left of candidates like Michele Bachmann (and possible future candidates like Sarah Palin). He is a libertarian when it comes to many other issues.

For example, when asked about President Obama’s health care reforms, he is against them, but does not wish to go back to the health care system the way it was before the reforms. For those who can not afford health care, Sharkey proposes a unique solution where not only the poor would have free health care, but free dental care, as well. “As President, I will legalize marijuana and prostitution,” he said, though he stresses that he himself does not smoke pot, or pays for sex. Sharkey would authorize the states to run both, “and the money made from these two businesses would be used for health, prescription, and dental insurance for those who can’t afford it.”

When questioned about using the U.S. military to invade other countries, he seems to channel Ron Paul when he said, “I would bring all of our troops home from hostile places and war zones.”

Indeed, the man who would personally execute criminals by impaling reveals himself to be more moderate than Bachmann and Palin in yet another way. Just days after New York State allowed same-sex marriages to be performed, he told SLAM! Wrestling, if elected President, he “will perform same-sex marriage at least twice a month at The White House. I believe everyone who is in love should have the right to marry their heart’s desire.”

While this might not endear him to some social conservatives within his party, his religious beliefs won’t win him followers from that same camp either. That camp won’t even accept a Mormon leader, such as Mitt Romney, so it should be no surprise if they were to be biased against Sharkey, an avowed “Luciferian [who] also follows the Goddess Hecate.” Describing his religion further, he says, “Lucifer was right rebelling against God. For had he not, man would never had the thought to do so. The best example of following Lucifer’s act of rebellion is our Founding Fathers. If you think about it, they rebelled against King George and the British Government. Had they not, we would not be the nation we are today.”

Sharkey continues by saying that “I also believe in the ways of the Goddess Hecate. And like her, I will unleash my vengeance upon my enemies. I believe in protecting Mother Earth. I will be a very environmentally caring President. Al Gore will love me for that!”

Someone who won’t love him would be Mitt Romney. Sharkey declared, “The Republican Party is doing stupid things that will allow Obama to win. And Mitt is one of those stupid things.” Sharkey primarily dislikes Romney for his inability to defend himself against critics within his own party. “In 2008, he spoke about being a Mormon….now he is staying away from it. Why? Did he forget about the 1st Amendment?” Sharkey asks rhetorically. “I am not ashamed of my beliefs. Why should he be?”

Not all current Republican leaders annoy him, however. When asked who his dream running mate would be, The Impaler replied, “If I get the nomination, I have to go with a Jersey Girl… Former NJ Governor Christie Todd Whitman.”

As there is still a long way to go before the Presidential Nomination is decided for the Republican Party, Sharkey is keeping himself busy with filmmaking, much like his hero, Ronald Reagan did before running for public office. “I am finishing post-production on The True Impaler: REDEMPTION! And the short film I did last summer — The Comeback Fighter — is now available on DVD. I also did a movie called — A Cat’s Life. It will be for sale on DVD in July,” Sharkey said. In addition to some films being made in Romania, he is also working on a pro wrestling film entitled PowerSlam, which will film in 2012, before the Presidential Elections, one assumes.

While some may describe Jonathon Sharkey as a fringe candidate, his opinions reveal him to be far more mainstream than some of the other front-runners in the G.O.P. Perhaps a future Republican Presidential Debate could include him next time. As one of America’s top political comedians, Bill Maher, host of HBO’s Real Time pointed out about the first Republican debate this year, it was all about showing how many children one had. Sharkey has three children (a fourth sadly passed away), which places him higher in the (baby) rankings than Newt Gingrich.

The pro wrestler in Sharkey makes him unafraid to take on both the establishment G.O.P and the Tea Party. When pressed on his opinion of Michelle Bachmann, The Impaler concluded, “She’s too flakey for me!”

Jonathon “The Impaler” Sharkey in the Internet Movie Database