Mat Matters: There will never be another Macho Man

To me, he will forever be the greatest of the great and one of the reasons I came to love and respect pro wrestling as a fan and later as a journalist.

Randall Mario Poffo, known to fans as the maniac Randy “Macho Man” Savage, was killed in a single vehicle car accident on Friday. As seems to be the curse of this industry and like so many before him, Randy left us all too soon. He was only 58 years old. With Savage’s passing, a piece of my childhood is gone too. 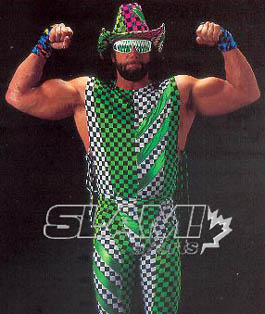 I had already been watching pro wrestling for years when Savage debuted in the WWF. He quickly became my favourite superstar of all-time, of any time, really. Up until that point, I didn’t think anyone ever could muscle the legendary “Nature Boy” Ric Flair out of that sacred spot. It was so close even Earl Hebner would have had trouble determining a winner but in my heart and mind, Savage eventually came out on top, never surrendering that position no matter how many new faces graced the squared circle.

It is hard to put my finger on any one thing as the deciding factor that tilted the scales in Savage’s favour. He was a true master of all the skills that make one an extraordinary wrestler. What really hooked me though was his wildly reckless style in the ring and his attitude to match. It didn’t hurt that Jesse “The Body” Ventura was Savage’s biggest supporter either.

Whenever you heard Pomp and Circumstance and those curtains parted, you just knew shit was gonna hit the fan. Due to Poffo’s portrayal, you had the feeling that Macho Man was always one small step away from going completely over the edge. Like Mick Foley, it seemed he would do just about anything, at any time. He was unpredictable.

In the wrestling world, he was a dangerous competitor as he had the skill to focus his ferocious energy. Where others would lash out and wildly lose control letting their emotions get the better of them, Savage could harness that power and was all the more lethal because of that ability. Savage was like a machine gun held in the hands of a sharpshooter and that’s what made his character so darn cool.

That’s what Macho Madness was all about.

For 20 years, I remained a Savage fan through all the highs and lows of his career. Hell, when I reviewed the WWE All-Stars game a few months ago, the first thing I did was win Campaign Mode with Randy Savage. If that isn’t “bowing down to the Madness,” I don’t know what is.

I would be remiss if I didn’t give Hulk Hogan some credit. Growing up in the ’80s, I had more fun cheering on the villains than the heroes because the baddies, well, they are far more interesting and fun. Hulk Hogan, made it so much easier to cheer for the heels. After four straight years of the undead saying their prayers and eating their precious vitamins, I was so desperate; I would even support Jive Soul Bro Akeem, if it would mean an end to Hogan’s reign.

Then, along came Randy “Macho Man” Savage. He was the mirror image of Hogan — if you smashed said mirror with a brick. Hogan was the role model. Savage was the rebel. Of all those who tried and failed before him, you had the feeling that if anyone was going to dethrone Hulk Hogan, it would be Randy Savage. When Savage became one of the most recognized Intercontinental Champions in the history of the WWF, it was just a matter of time before he traded up.

Eventually Savage would become WWF World Heavyweight Champion and put an end to the Hulkamania era but not in the way anyone ever thought. Ted “Million Dollar Man” Dibiase, Andre The Giant and Earl Hebner swindled Hogan out of the WWE World Heavyweight Title and Savage would weather a grueling tournament at WrestleMania 4 to claim it.

As Savage himself said: “Hulkamania is like a single grain of sand in the Sahara Desert that is Macho Madness.”

I almost cried tears of joy. Almost. This is wrestling we are talking about, folks.

Still, even though Savage had taken his place as the heir apparent to Hogan and launched the immortal Mega Powers tag team, the best moment in his career had already taken place: his match against Ricky “The Dragon” Steamboat at WrestleMania 3. Still widely regarded by many as one of the greatest matches of all time, it lives on to this day as an iconic example of pure athleticism in the face of all those naysayers and of how to tell a good story, create high drama in a wrestling ring.

Savage, who bowed out of the spotlight on his own terms some ten years ago, is now in a better place with his former wife and valet Elizabeth Ann Hulette, known to us as Miss Elizabeth, who died in 2003. Whether romantically involved behind the scenes or not, Elizabeth and Savage had that special chemistry that cannot be scripted. There has been no other wrestling couple since who have captured the hearts of fans all over the world. They will live on as wrestling’s beautiful princess and flawed prince.

We cannot talk about Miss Elizabeth and not mention the awesome Sensational Sherri. I have yet to see a valet or manager who put as much into her role as Sherri Martel did. She was absolutely incredible. With Elizabeth gone, Sherri increased Randy’s savageness as she would do everything Elizabeth wouldn’t. Sherri, who died of an accidental overdose in 2007, was as much as Elizabeth’s mirror image as Savage was Hogan’s, which is why they worked so well together.

For these reasons and many more, Randy Savage was truly the sum of all of his parts.

Savage said it best himself.

Yet, through it all, he was a rebel to the very end. And that’s why he was my hero.

And let’s not forget, he is the only person who has ever gotten me to proudly wear a purple T-shirt. No easy task. Trust me.

Thank you for the memories I will always treasure. Goodbye Randall Mario Poffo. Pro wrestling was not the same when you were there and will never be the same now that you are gone.