Jake The Snake can still captivate

Jake “The Snake” Roberts can still captivate an audience like few others. Last week, at the Cauliflower Alley Club’s Baloney Blowout, he had the microphone for less than two minutes and left an indelible impression on the crowd.

Roberts was at his first CAC reunion, held at the Gold Coast Hotel & Casino in Las Vegas. He was there to see his half-sister, “Rockin'” Robin Smith be honored for her contributions to women’s wrestling, but also to see some old friends. 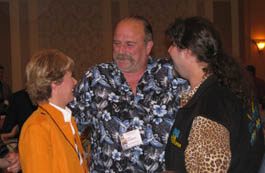 His past, however, has followed him around.

In particular, ever since the movie, Beyond the Mat came out in 1999, the general consensus has been that Roberts was a messed-up man who abandoned his children.

When he got the open mic, he addressed those personal demons.

“Reality sucks, man. You go through life thinking you’re invincible and that it will never end, and something brings you back to earth. I’m just thankful today that I have a life. I’m healthy. God knows that if I knew I would live this long, I would have taken a hell of a lot better care of myself. But of all the things that I’ve done — and I’ve done ’em all — helped me become the man that I am today.

“I’ve got eight children. I don’t remember some of those nights,” he joked, as the crowd erupted in laughter.

“I was always fortunate to marry a better woman than I deserved, because they raised the children. I was never man enough to do it. I was too busy being selfish, trying to figure out what I was.

Greg Oliver got to hear a bunch of Jake Roberts tales at the Baloney Blowout. Awesome. Greg can be emailed at [email protected]