When the ECWA Super 8 Tournament gets underway this weekend in Voorhees, N.J., one upstart wrestler has his eyes set on winning it if he can, but taking the experience all in as the main win he hopes to accomplish.

Adam Cole, currently under contract to Ring of Honor and a Combat Zone Wrestling veteran though he’s just 21 years old, was humbled to be named to participate in this weekend’s tournament and hopes to make the most of his opportunity. 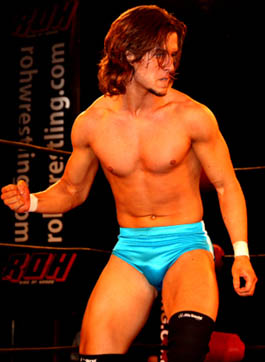 “The Super 8 is easily the most prestigious tournament in all of indy wrestling,” Cole told SLAM! Wrestling recently. “If you look at the list of all the guys who have won it before, they’ve all gone on to be successful. It’s just something I know I can’t take for granted and I have to go and showcase what I am all about.”

In ROH, Cole and Kyle O’Reilly have been a popular tag team much of the year and garnered serious TV time on the since-canceled ROH TV show on HDNet. Cole said that when he was initially told he was going to be slotted in a tag program with O’Reilly, he frowned on the situation.

“When I signed with ROH, Kyle was signed a week later,” explained Cole. “We did a pre-show match for Dragon Gate USA and had a breakout match. We had also had a match for CHIKARA that got us some praise. Based on that, I thought ROH would put us against each other and we’d have a long feud.

“Then we found out ROH wanted us to team together and at first, that upset me. I wanted a singles direction and I’ll be honest — I was unsure of the decision to have me and Kyle team up. Then once we teamed up, I loved it and now I actually prefer tagging. Outside of the ring, Kyle and I are close friends and inside, I think we complement each others’ styles pretty well.”

Earlier this year, Cole and O’Reilly had their TV debut match against the Bravado Brothers, a match Cole said was a “dream come true.”

“To be able to say I was on TV, that match served as motivation to say that, yeah, I can do this and I can do anything,” beamed Cole. “It makes me want to work harder and be even better. I even got to sit down with my mom and watch the match and that was a really cool thing to do.”

While not too many wrestlers will admit that they spend time with their mother, that’s part of Cole’s intrigue as an up-front, honest individual not seen a whole lot in the realm of pro sports.

“My mom is my rock,” said Cole. “She’s my best friend and is the most supportive person in my life and believes in me. I mean, how else would a mother react when her kid says that he doesn’t want to go to college and wants to be a professional wrestler and wants to get all banged up, beaten and sleep in random hotel rooms or even on gym floors? Not many. She has always known I could make it in wrestling and I don’t think I could do all of what I’ve done so far without her. She’s not a fan of wrestling, but she knows how much it means to me.

“She was at Final Battle (last December) and I singled her out in the crowd. Just an amazing woman who has always been there for me.”

But will Cole be a ROH lifer? Or would he jump to TNA or WWE if the opportunity presented itself?

“I’m very, very happy in ROH — 100 percent happy,” said Cole. “That said, I think I’d be naïve if I didn’t say that one day I’d like to work for WWE and have my WrestleMania moment, you know? I’d love to be a part of that, but right now, ROH is where I want to develop as a professional wrestler and we’ll see what the future holds.”