Of all the conspiracy theories he has investigated — Who shot JFK? Who was really behind 9/11? — there’s one question from his distant past that still irks Jesse Ventura. 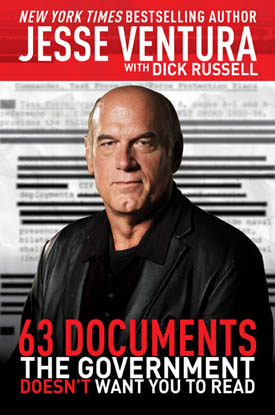 “Who ratted out Jesse Ventura!?” he roars with his unmistakable vocal swagger over the phone from a Manhattan hotel room. “Now there’s a conspiracy for ya!”

He’s referring to the alleged locker room snitch who, during Ventura’s heyday as a bleached-blond badass in the World Wrestling Federation, squealed to the company bigwigs that “The Body” had been talking about forming a wrestlers’ union. Such talk was heresy in wrestling locker rooms at the time, and remains so among the so-called “independent contractors” who take big risks in hopes of earning big bucks in the ring.

Ventura claims to know the true identity of the stool pigeon who ratted him out — and, in typical Ventura fashion, he answers that question with another question:

“Who is the greatest wrestling star in history?” Ventura asks rhetorically.

Even people who hate wrestling know the answer to that riddle: Hulk Hogan.

Ventura says he has signed legal documents, (obtained during his lawsuit against WWE honcho Vince McMahon for unpaid royalties) that prove the Hulkster was indeed the union-buster who snitched to McMahon.Then again, Ventura has in his possession thousands of documents that he believes shed light on much shadier dealings than you’ll find in any wrestling locker room.

His just-released book, 63 Documents the Government Doesn’t Want You to Read, is a collection of once-redacted memos and declassified cables that he believes undermine the legitimacy of democracy in America.

Whereas his gripe with Hulk Hogan is “water under the bridge” now, Ventura insists he and co-author Dick Russell have unearthed a trove of present-day intrigue and scandal.

Decades have passed since Ventura hung up his tie-dyed wrestling tights to try his hand at the more peculiar business of American politics.

He “shocked the world” when, in 1998, he ran as the Reform Party nominee for governor of Minnesota and narrowly defeated both the Republican and Democrat candidates. His gubernatorial tenure exposed him to a world that he says was “way dirtier than wrestling,” and that shook his faith in American government rather than strengthening it.

So now, through the new book and his TV series, Conspiracy Theory with Jesse Ventura, he seeks to expose the secrets that the U.S. government and military are purportedly hiding from the populace.

He does it, he insists, not because he’s an anarchist bent on dismantling government, but rather because he’s a true patriot who wants to honour the founding principles of his country.

“Thomas Jefferson said dissension is the greatest form of patriotism, and I agree,” Ventura says from his room in Manhattan’s trendy Muse Hotel, on the eve of his appearance on CNN’s Piers Morgan Tonight.

“If you don’t hold your elected people’s feet to the fire, you’ll get bad government. It’s our civic duty to pay attention and hold the government accountable. I think I’m a patriot for doing what I do.”There are some, of course, who think he’s a bit of a wingnut who preys on paranoia to sell books and boost TV ratings.

Ventura was a “trending topic” on Twitter worldwide during his tete-a-tete with Piers Morgan, though public opinion seemed evenly split between those who supported his views and those who thought he was barking mad.

Such polarized responses are nothing new when it comes to Ventura, dating back to his days as a wrestling heel that fans loved to hate. Perhaps even better known than his in-ring career was his long stint as a colour commentator during the professional wrestling boom of the 1980s, during which he called some of the most prominent matches in the history of the industry. 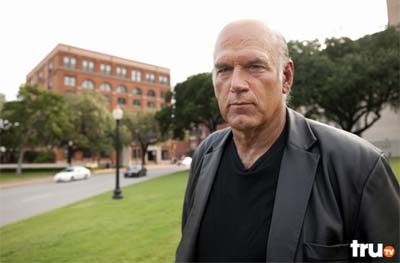 In front of the Texas School Book Depository in Dallas, TX, for Conspiracy Theory with Jesse Ventura on TruTV.

He was the first great heel commentator, typically rooting for the bad guy and mercilessly mocking fan favourites like Tito Santana (whom he called Chico) and Hulk Hogan.

In reality, Hogan and Ventura were good pals until the alleged snitching incident, though Ventura now claims that he harbours no ill will toward anyone in wrestling.

In fact, he’s not even sure who’s wrestling these days, since he never watches it.

To be fair, he doesn’t watch anything on TV these days, since he lives with his family on a remote ranch in Mexico, “an hour from pavement and an hour from electricity.”

He spends much of the year south of the border, walking his dog five miles in the desert every morning, then swimming and surfing in the ocean every evening.

“I call it flushing my brain out,” he says. “I guess you’d call it going native. You worry about what’s going on within a five-mile radius and nothing else throughout the world.”

When he’s not in Mexico, however, he worries a lot about what’s going on throughout the world. He worries that American politicians are in cahoots with terrorists. He worries that the American military is circumventing international law to torture detainees in illegal prison camps. He worries that heightened airport security is robbing citizens of their dignity while zapping them with metal-detecting “microwaves.”His concerns about unconstitutional security measures at airports even inspired him to recently launch a lawsuit against the Transportation Security Administration (TSA), on the grounds that he, a former governor and public figure, poses no reasonable threat to the airlines, and should therefore be exempt from security screening.

On the show Conspiracy Theory, he is depicted going after even more nefarious evildoers, such as the Bilderberg Group (a cabal of world leaders supposedly bent on world domination) and Area 51, the mysterious air force base in the Nevada desert alleged to be a test-flight facility for reverse-engineered UFOs.

When asked if he actually believes all the theories he explores on the show, his answer is both evasive and telling:

“Remember, what we do on the show is entertainment,” he says. “We never called my show a documentary. It’s TV, it’s entertainment.”

Even so, this form of entertainment has drawn some criticism for striking a particularly sore spot in the American psyche — the tragedy of 9/11. Conspiracy Theory devoted an hour-long episode to exploring the claims that the terrorist attacks could have been an inside job, in which the American government was either complacent or complicit. 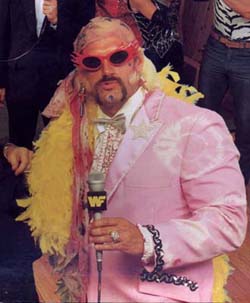 In the WWF, Ventura knew how to dress to impress.

Ventura again refuses to categorically state his personal belief about the true culprits of the 9/11 attacks, instead offering what he sees as the three possibilities:

“Either the government knew about it and allowed it to happen, or they actually participated in it, or the third alternative is that they had to be the most inept presidential administration that we ever had.”

He then adds the kind of bold proclamation that made him both a hero and a pariah during his years in politics: “Had I been president of the United States at the time, 9/11 may not have happened.”

Such statements are classic Ventura — fearless, brash, possibly true and unabashedly controversial. But despite his bravado and domineering personality, Ventura is surprisingly cordial and affable, willing to chat about whatever topic pops up.

So when the conversation meanders back to wrestling (after a few random tangents about Harvard, eating organically and paddle-surfing), he launches into the same tirade that got him ratted out decades ago.

When Linda McMahon (wife of Vince and, according to some, the brains behind WWE’s brawn) dropped out of the wrestling business to launch an ill-fated campaign for U.S. Senate in 2010, the “independent contractor” issue in wrestling was brought to light, and may have contributed to her loss.

“I warned Linda,” Ventura says. “She called me before she announced she was running. I said to her, ‘Linda, are you sure you want to do this?’ I said, ‘Be prepared: you’re going into a serious game, and now anything you and Vince have ever done is going to come to light. That’s how dirty the game of politics is.'”Ventura seems content these days to be outside of the political arena, looking in. The wrestler-turned-actor-turned-mayor-turned-governor has reinvented himself once again as a crusader against government duplicity.

Despite being admittedly computer illiterate, he just launched (with much help from his son) a new website. A second season of Conspiracy Theory is under consideration, with eight more scandals to be exposed, though the network has not yet confirmed whether it will happen.

So Ventura will soldier on, promoting the new book in a dozen or so cities around the U.S. before retreating to his sanctuary in Mexico to go “off the grid” for a while.

Sooner or later he’ll resurface, to seek the truth, or some variation thereof.

The truth is indeed out there — and it, like Ventura himself, is often stranger than fiction.

COLIN HUNTER was overjoyed when Jesse Ventura obliged his request to end their phone conversation with his trademark signoff from The Body Shop, “The pleasure was all yours.” It was! You can reach Colin here.