A few years back, hot on the heels of the success of The Wrestler, the Chicago Tribune sought out local wrestlers to tell their gritty stories. When it described “Sweet ‘n’ Sour” Larry Sweeney, who died today at age 29, the paper said that he was “a volatile manager character, in the tradition of Bobby ‘The Brain’ Heenan, a heel who often ends up in the middle of the action.” 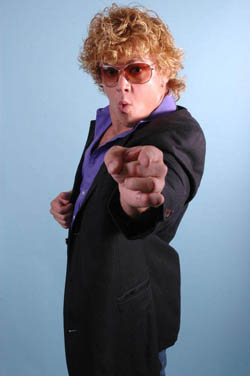 Of course, Alex Whybrow, who worked as Sweeney, was a lot more than a wrestler. The newspaper noted that he had been a house painter, a blacksmith’s apprentice and Kaplan tutor before getting a full-time gig for Ring of Honor.

He also did a lot more than just manage during his life in professional wrestling.

And he obviously had given the sport a lot more thought than most.

In an interview with The Believer magazine in January 2010, Whybrow talked about the feeling of performing in front of a crowd.

“Hero is a huge word. We’re all regular people, in the locker room and in the audience, but when the music starts and you walk through that curtain, it’s time to be larger than life,” Whybrow told writer Andrew Simmons. “You have a vocabulary of moves to make you larger than life. People want to believe in you and make you larger. You can do Shakespeare in the park in front of nobody and it’s still Shakespeare, but wrestling needs fans to work. Athletes and actors don’t depend on fans the way we do. We appreciate them because they’re involved.”

Whybrow was a native of Winnetka, IL, graduating from New Trier Township High School before heading off to Oberlin College in Oberlin, OH, where he studied English. During a work/study program at college, he went to India and caught a wrestling bug, having watched the “real primitive, circle-in-the-dirt type stuff,” he told the Tribune. “Amateur style, wearing loincloths — that’s what it is.”

He headed to Philadelphia to train with CHIKARA, and honed his character. Debuting in 2000, he was unafraid to travel, performing from the west coast to the east, and up into Canada.

Though “Sweet ‘n’ Sour” Larry Sweeney, the manager, is what most will remember him as, Whybrow did have a high-profile gig in July 2006 on Monday Night Raw, even getting microphone time, as a Nick Hogan look-a-like for a spoof segment Orton Knows Best.

In an August 2010 rant on his MySpace page, Whybrow addressed some of his frustrations with the wrestling world, and though he was moving to Louisiana to compete, was unsure how much longer he’d be in the game.

“Then I may disappear never to return to this business again, or I may be back. I honestly don’t know at this point,” he wrote.

Early reports are that he took his own life.