Mania live had highs and lulls

ATLANTA — Sometimes a couple of excellent matches can cover up for some head-scratching moments on the rest of a wrestling card, even if that card happens to be the industry’s biggest show of the year.

That was certainly the case Sunday night at WrestleMania XXVII. Though it’s never good when a crowd of over 71,000 fans goes quiet during the main event or a carefully built up match like the one between Michael Cole and Jerry Lawler, one got the impression that most of those fans went home satisfied thanks to two bouts that showcased equal parts emotion and action. 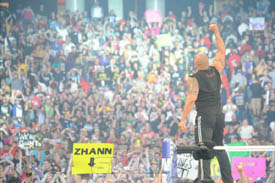 The Rock basks in the cheers as WrestleMania ended. Photo by Mike Mastrandrea

The high point of the show was unquestionably the much anticipated meeting between The Undertaker and Triple H. The two veterans haven’t wrestled much in recent months, but they wasted little time tearing into each other with the Dead Man’s 18-0 WrestleMania mark on the line.

Both men pulled out all of the stops. The Undertaker rose to the moment as he always does, maybe a half-step slower but still able to pull off signature moves like his dive over the top rope to the floor.

Triple H hit his foe with everything but the kitchen sink and couldn’t get the three count. His incredulous look was instantly recognizable and completely believable.

The finish was pro wrestling drama at it’s best, making fans believe either man could win. Triple H looked like he could pull it off twice — once after connecting with Undertaker’s own Tombstone finisher, and again when his trusty sledgehammer was within reach — but eventually was forced to tap out, keeping The Streak alive and bringing appreciative applause for both grapplers.

Randy Orton’s victory over CM Punk was also full of things wrestling purists enjoy. It was the culmination of a lengthy feud (Punk’s beef with Orton stretches back about two years) and featured two performers who are throwbacks in the very best sense of the word.

Orton and Punk told the story of their match using their faces as well as their bodies. It’s a rare gift among the current group of WWE Superstars, but it shined through for these two on Sunday night. 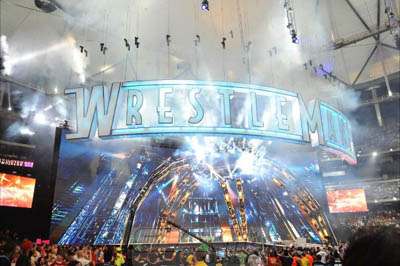 As for the missteps, at least the WWE started from a position of strength with the two matches that seemed to drag the most. Both the Miz-John Cena main event and the Cole-Lawler grudge match were built up well but lost the fans a few minutes in.

For the battle of the announcers, it was a lengthy sequence of offense for Cole that took the air out of the crowd. He’s not a wrestler, of course, and it showed during that spell when the arena got strangely silent.

The intervention of Stone Cold Steve Austin perked things back up in a hurry. But Cole’s eventual DQ win was a downer, and it really only made sense if the “Voice of the WWE” is going to continue in his blatantly heel role going forward.

Miz and Cena were simply overshadowed by The Rock, a definite risk any time he’s involved. Though he wasn’t offically slated to be involved with the main event, smart money said he was going to inject himself into the proceedings at some point.

He kept the match from ending in a disappointing double countout, which was a definite plus. Unfortunately, The Rock also got over on the champ and the challenger before the show ended, potentially weakening them both in the eyes of the fans.

At least The Rock dropping Cena and Miz sent everyone home on a high note. It remains to be seen if the full time actor is going to stick around long enough to keep interacting with either man.

If he does, it would make up for what the main event lacked when it happened, the same way the peaks in Sunday’s show made up for the valleys.