Fans still love getting close to Superstars at WrestleMania Axxess

ATLANTA – The fan festival known as WrestleMania Axxess has been through some changes since it first debuted over a decade ago. Once more of a showcase for WWE’s stable of outside licensees, it’s become bigger, a mostly in-house affair, and yes, more expensive.

Yet it remains the best way for fans to get close to their favorite WWE Superstars, and the large crowds waiting to get into the Georgia World Congress Center this week seemed as eager as ever to take in all of the attractions inside. 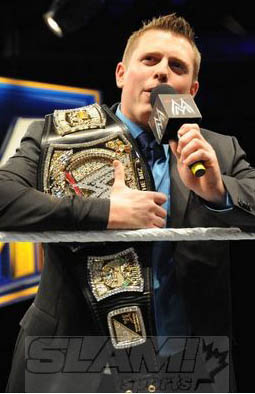 The Miz talks to the crowd on Friday at WWE Axxess. Photo by Mike Mastrandrea

This year’s event featured many of the staples fans have come to expect. Plenty of memorabilia was on hand, including a display of various title belts, an array of Shawn Michaels’ most memorable entrance outfits, and vehicles used and abused on WWE programming — though not as many as in the Attitude era.

Hands-on activities were also a big part of Axxess. Younger enthusiasts seemed especially fond of the Superstar Entrance station, where people can make videos of themselves recreating the ring entrances of a host of different WWE performers.

The autograph queues were as long as ever, with everyone from Wade Barrett and Justin Gabriel to Natalya attracting a crowd on Friday night. Main eventers like John Cena and Edge required a separate VIP pass to guarantee a signature, but lest there be any doubt whether people would pay extra money on top of the normal $42 ticket price, VIP packages were sold out for all Axxess sessions.

VIP status also enabled fans to stand just a few feet away from the Main Event ring, where the most interactive portions of Axxess took place. Children from the Make-A-Wish Foundation were ringside to see pro skateboarder Rob Dyrdek team with WWE Hall of Famer Rowdy Roddy Piper lock up with Tyson Kidd and Zack Ryder — a match Dyrdek won by skating down a ramp on the outside and executing a cross body over the ropes. 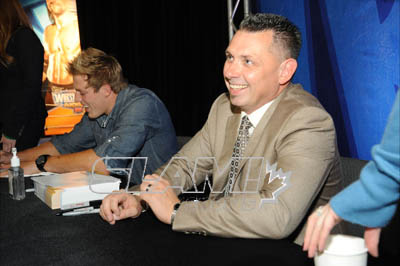 Michael Cole is all smiles while at WWE Axxess on Thursday.

The heels also held court during Friday’s Q&A sessions, which have been part of Axxess for a while but felt especially lively this year. Announcer turned combatant Michael Cole got plenty of crowd reaction as he and trainer Jack Swagger smirked their way through questions submitted by the fans.

“Pay your money and buy the pay-per-view so you can see,” snarled Cole when asked what his ring attire would look like when he faces Jerry Lawler at WrestleMania. The self-styled “Voice of the WWE” also gave a shout out to a particularly supportive group of fans from Houston, calling them his “Cole Miners” and thanking them for joining the “Cole-alition.”

That interview ended with Tony Chimel on the wrong end of a Swagger ankle lock, meaning Matt Striker had to handle the honors when The Miz came out for his Q&A time. The WWE Champion lobbed some verbal grenades over at Cena, who was signing and talking to a TV crew in the VIP area.

“I don’t think he can hear you over there,” Miz said. “Should he still be taping that interview while all of you are yelling ‘Awesome?'”

He also laughed at a question about his toughest match in WWE so far after some of the ringside supporters chanted for Daniel Bryan. Saying there must be some “internet marks” in attendance, Miz stayed in character and stated his long-held view that he made Bryan’s career.

There were some taunts for The Rock when Miz said he wasn’t going to be live via satellite because he didn’t need to be and a standard bad guy bit when he described the expensive suits he wears on TV. But he was a little more heartfelt when asked what he hopes his legacy will be when he wraps up his WWE career.

“The legacy of The Miz is going to be like this: I’m the guy that worked the hardest, that dedicated himself each and every day,” Miz said. “When people sit there and say ‘Listen, this job’s too hard, we’re on the road too much,’ I’m the guy saying I need more media. I need more outlets. Give me every radio spot that you have, anything there is. You want me at Axxess, I’ll be at Axxess each and every day… And you will remember The Miz as the WWE.”

Heel champion or not, The Miz had the fans eating up every minute he was in the ring before taking some time out to film a short segment with a correspondent from The Tonight Show. His part in Axxess was done for the night, but the event rolled on, as big a part of WrestleMania weekend as it’s ever been.