Despite what a lot of people like to say about Paul Wight, there’s no denying that The Big Show has had incredible staying power in pro wrestling.

For well over a decade, between stays in WWE and WCW, Wight, perhaps better known as The Big Show, has been one of wrestling’s featured attractions. Rarely has he slipped below the upper-mid card, and even more sparsely has he been considered someone who didn’t belong on the marquee. Yes, his size has played into his popularity (or hatred), but given the number of men who are just as imposing in size or girth that have come and gone, you have to recognize that Show is indeed one of the best big man wrestling has ever seen. 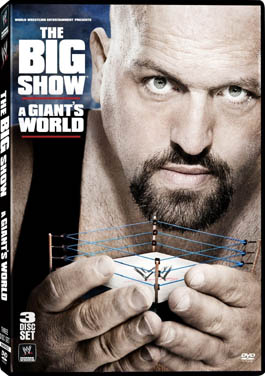 With that in mind, it’s somewhat surprising that WWE has not jumped on making a DVD dedicated to Wight up until now, with The Big Show: A Giant’s World — especially when his story is one of the more interesting ones — a former basketball player who was forced to leave the sport because of gigantism, found himself penniless and eating toothpaste sandwiches before being discovered and offered a golden ticket in WCW.

The thing that most fans will respect is that Show outright admits that in the first run of his career (even into his WWE time) he was not knowledgeable in the ring. Here, Wight is very candid about his career, which is extremely refreshing. He carries the same honesty when he talks about going to OVW during an ordered weight loss excursion, changing his mammoth eating habits and the setup to one of wrestling’s more unique moments — the punch from Floyd Mayweather Jr. that broke Show’s nose.

Throughout the DVD, we also see snippets of what makes Wight extremely unique — his humour and knack for comedic acting. Leave Knucklehead aside, Show has proven to be very versatile in and out of the ring, both in being a big, nasty imposing terror and a very laid back, friendly and downright funny guy.

Interestingly, what we really don’t see a lot of in the DVD are the challenges of being The Big Show outside the ring. It would’ve been interesting for WWE to document the uniqueness of being as large as Show is. Illustrating some of these challenges was a phenomenal opportunity lost.

Beyond that oversight though, WWE did another solid job on the documentary. The matches themselves, well, that can be taken or avoided, depending on your taste for “big man” wrestling. But the documentary portion of the DVD should not be missed and is highly recommended for anyone who wants some insight into one of wrestling’s most durable and long-lasting big men.