The SLAM! Wrestling photographers look back at 2010

We are blessed at SLAM! Wrestling to have a great collection of photographers contributing their work from across the continent. In this special piece, various SLAM! Wrestling photographers look back at 2010 and their favourite moments, as viewed through their lenses, from indy shows to WWE spectaculars. Enjoy! 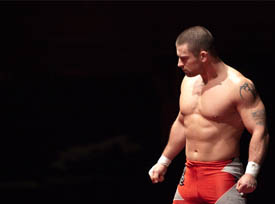 Ricky Havlik, RickyHavlik.com (Romeoville, IL): I have been fortunate enough to shoot a number of Davey Richards’ matches. It doesn’t matter who he competes with, he always carries an intensity level like no other. I notice it in the smallest mannerisms, like in the photo to the right, from Dragon Gate USA Fearless in January 2010. Davey was perched on the second rope, staring down the ramp way for his opponent. With this photo, I was looking to create a different type of portrait by using negative space and the blacked out background. There are no distractions in the photo, nor for Davey. With his clinched fists and cold stare, he is ready for battle.

Mike Mastrandrea (Toronto, ON): My favourite photo of 2010 was taken on Sunday May 23, 2010 at the WWE Over the Limit PPV in Detroit, Michigan, reproduced below. It’s CM Punk, with his head freshly shaved. This is not the most technically sound photo or aesthetically pleasing pic but it captures a moment that was exclusive to SLAM! Wrestling.

While the WWE was trying to put off showing a bald CM Punk for weeks to help build up a debut of a bald Straight Edge superstar, SLAM! Wrestling had this exclusive imagery hours after it aired live on PPV.

Now, we don’t have the multi-photographer crew that the WWE has nor do we work off of their thousand dollar lighting flash grid, but what we were able to do is provide a different point of view. This different point of view not only appears in our photos but also carries over in our articles, news and feature stories. What SLAM! Wrestling showed in this photo epitomizes what we do — instead of showing what they want you to see, we show you what the fans want to see. 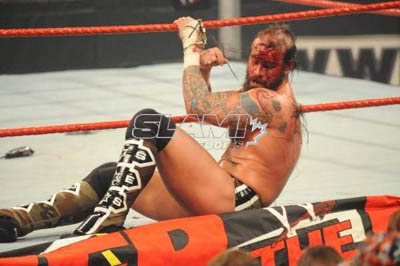 CM Punk at the WWE Over the Limit PPV in Detroit. Photo by Mike Mastrandrea

Minas Panagiotakis, www.photography514.com (Montreal, QC): Last year brought some interesting moments as a photographer. I don’t have a particular favourite photo that I took but I certainly have several special moments that I would like to share.

The first event that comes to mind is March 5, 2010 TOW. There were many stars on the card that night, Samoa Joe, Hernandez, Viscera, etc., and many shocking incidents such as Darko chokeslamming Sylvain Grenier through the ring. On that night, none can compare to having one of Canada’s all-time wrestling greats, the since-deceased Edouard Carpentier. It was phenomenal to see a man at his age in a wheelchair still willing to come out and greet some of his long-time fans and youngsters who had only heard of him I am deeply honoured for having that opportunity and for capturing some great memories of Edouard Carpentier. 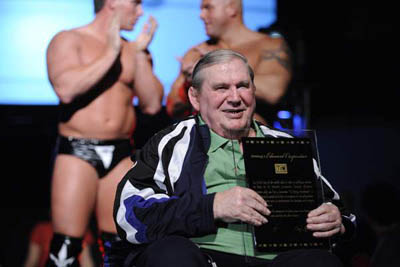 Edouard Carpentier waves to the crowd at the TOW show in March 2010. Photo by Minas Panagiotakis, www.photography514.com

Another great photography moment in 2010 was on September 24 at TOW when I finally had the chance to meet and photograph my favourite childhood tag team, Bill Eadie and Barry Darsow better known as Ax and Smash, Demolition. Backstage I told a story to Barry Darsow how at eight years old I was drawn and eventually became a wrestling fan due to a match I saw on the tube between Demolition vs. Billy Jack Haynes and Ken Patera.

Lastly, one of my all-time moments of 2010 was on October 31st at the Bell Center in Montreal when the WWE rolled into town for a special matinee house show. It was a great experience and hopefully I will have more opportunities to photograph WWE events in 2011.

From time to time I check up on SLAM! Wrestling to catch up on the latest news, special features and to see what my photography colleagues have been up to. It is always interesting to see another photographer’s perspective and view on this sport. I don’t have a favourite 2010 photo but I would like to thank the entire gang for provided excellent coverage. Thanks to George Tahinos for the amazing TNA and ROH galleries, Mike Mastrandrea for the great coverage of WWE events and anything in the GTA, Christine & Mike Coons for their features of wrestling legends and reunions, always interesting to see what former legends and stars are up to! Bruno Silveira for his work on WWE and ROH, Ricky Havlik on ROH and Dragon Gate, Mathieu Sage for NCW Femmes Fatales, Richard Strickland for his WWE coverage and a special thanks to anyone else that I forgot to mention that makes SLAM! Wrestling what it is today. Let’s not forget the best story tellers off all, the writers of SLAM! Wrestling. [Editor’s Note: Minas, the cheque is in the mail!] 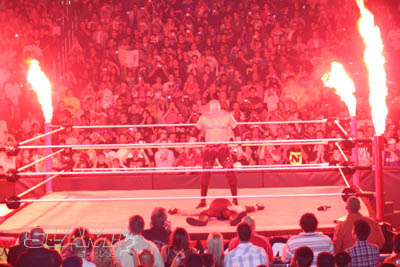 Richard Strickland (Los Angeles, CA): SummerSlam was a blast for me and I am looking forward to the shoot this year. Seeing the Undertaker appear in the casket that was supposed to hold either Kane or Rey Mysterio cause a lot of excitement in the house. Everyone thought that Mysterio was going to be the focus of the Undertaker but the Deadman went for Kane. Kane was to win this one as he laid out the Undertaker with a tombstone pile driver and the celebrated with the fires from the depths of hell. 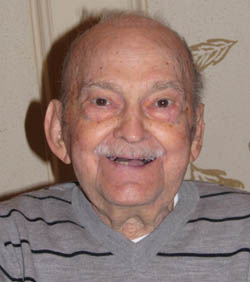 Greg Oliver (Toronto, ON): I’ve never claimed to be a photographer, but hey, I end up at a lot of events. The most photogenic grappler I came across was 90-year-old Ted Tourtas at the Cauliflower Alley Banquet in April. Once we got him started talking, phew!