When you can speak a half-dozen languages, it’s no wonder that Jacob “Dutch” Grobbe, who died today, went through a number of gimmicks during his wrestling career, including the German Hans Mortier (his best-known name), Dutch Howlett, Tarzan Zorro and Lord Charles Montague.

Grobbe was born January 28, 1924 in Leiden, Netherlands, and over time, he would grow into a 6-foot-5, 275-pound headliner. One of his noted tricks was his ability to roll his stomach.

Don Curtis and his wife Dotty were close friends of Grobbe’s. 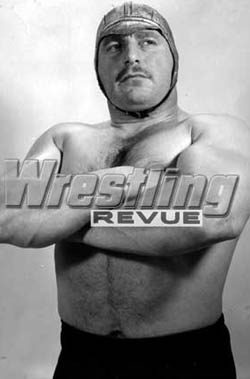 “Jacob ‘Dutch’ is one stand up guy and Don and his friendship is akin to Don and Lou Thesz’s friendship,” Dotty Curtis wrote of her late husband. “They were there for each. Don was laid up in a lonely hotel room in France, and in pops ‘Dutch’ and tells Don, as long as you are here, you don’t worry about anything. I will take care of you! And he did. Talk about a book, Dutch’s first-hand experience of getting away from the Nazis is hair raising!”

As the Nazis invaded Holland, Grobbe was a teenager. He hid out with some friends, but had the wherewithal to leave the door open and the lights on in the room they were hiding so the Nazis wouldn’t suspect anyone was in there. Later, his mastery of languages came in handy, and he was able to convince people he was from Germany because his dialect sounded like someone from there, rather than a Dutch-speaker trying German.

Grobbe originally made his way to the United States after World War II in somewhat heelish fashion.

Stationed at a U.S. military base, he hopped on a transport headed to the States, with “borrowed” papers for a serviceman named Howlett. At the airport, he evaded the security upon disembarking, and hopped a fence to begin a new life in America illegally.

With his mastery of many languages — German, French, English, Dutch and Afrikaans — he fit in fine. For six months, he was a police office in Tacoma, Washington, using the last name Howlett. It was there that bodybuilding became a passion, and where he had his first match in 1946, against Abe Yourist.

The international intrigue continued, however, as Grobbe married and fathered two children. Once, when his wife was irate at him, she reported him to the authorities as an illegal alien. He was given two choices — be deported under protest, and never return, or leave on his own, able to petition to return in two years’ time. With the help of friends, including many wrestlers, he gathered the funds to leave and begin competing abroad. In Australia, from 1955-57, he worked as The Great Zorro.

Back in North America, Grobbe fought under numerous names.

Booked out of Columbus, Ohio, from 1949 to 1951 or so, he was Dutch Howlett, or sometimes “Jungle Boy” Dutch Howlett.

In Montreal, he was Tarzan Zorra in 1971, having been unmasked as Dr. X.

“I was impressed by his physique,” recalled Paul “The Butcher” Vachon, adding that he wasn’t pushed as a German in Montreal, but as a Frenchman.

Vachon also worked with Grobbe at the famed Palais de Sports in Paris in the 1960s, where Grobbe was a star. According to Vachon, Grobbe wrestled “pretty practical stuff, solid wrestling, nothing really spectacular. What really got him over was his body. He was sculptured, really. He had the European style of wrestling; that’s what made him exceptional when he came over here.” 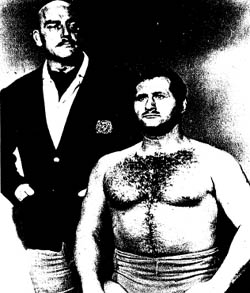 Another hot run was with Prof. Boris Malenko in Texas in the early in 1970s, when Grobbe was Lord Charles Montague, “the discoverer and manager of Malenko.” Grobbe would work on the undercard, and then second Malenko to the ring. (He’d teamed with Malenko in Florida in the early 1960s, under a mask as Masked Zorro.)

Given his international flair, for a time Mortier claimed that he was once the bodyguard for French starlet Brigette Bardot.

But it is as Hans Mortier, wearing a gold lamé World War I German aviator’s helmet on his head, that Grobbe is best known. His highest profile matches came challenging for the WWWF World title, held by Bruno Sammartino, on numerous occasions. In fact, he was Sammartino’s first serious challenger after the WWWF was created, and Sammartino beat Buddy Rogers for the new title. Part of Sammartino’s lore comes from his ability to break Mortier’s full Nelson hold.

In a self-penned 1963 Wrestling World article, that is mostly-fiction, Mortier addressed his headwear: “Well, almost everybody I met wanted to know why I wrestle with a protective helmet. It’s not a big helmet, but resembles the kind worn by the aviators in World War I. Red [Berry] was the one who insisted I wear it. He says he wants to protect my manly beauty.”

A title belt, billed as the European or International championship, was a constant as well, as was Wild Red Berry as his manager.

“Last year I found a German, a 6-5, 275-pounder with 19 and a half inch biceps who has the greatest physique I ever saw, and I’ve seen ’em all since [Jim] Londos was just a pup,” said Berry in December 1963. “Well, I took this German, Hans Mortier, and I sold out arenas all up and down the east coast.” 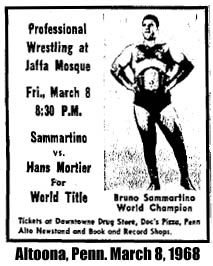 Mortier was included in a Top 50 list of the top wrestlers in America in a 1964 edition of Wrestling World. “Mortier has one of the best builds in wrestling. Hans comes from Europe where he was the International champion. Red Berry brought him to America in 1962 where he worked Florida rings as the Mighty Zorro. Hans’ best hold is the full nelson which he calls ‘the guillotine.’ Mortier is well educated and can speak several languages fluently. Hans has held his own against the likes of Sammartino, [Edouard] Carpentier, Eddie Graham, Bobo Brazil and Buddy Austin.”

A 1971 column in the Fort Pierce, Fla., newspaper recalled a bout between Mortier and Danny Miller. “Mortier slouched into the ring, growling at the crowd. He gave a ‘Sieg Hiel’ that had the crowd spitting and screaming at him,” Ron Martz wrote. “Mortier wore black and was bald, with large bushy eyebrows and a permanent frown.”

In a 2004 interview with historian Crimson Mask, Buddy Colt talked about Mortier. “Terrific physique on him,” said Colt. “You know, he was amazing. European, he could speak about half a dozen languages fluently, and speaking English he had no accent. He was a great worker and a great, great ring presence. He’s just a great, intelligent man.”

For the last number of years, Grobbe was in poor health, living on the family estate in Leiden with his wife, Yolaine. Besides the usual aches and pains from wrestling, when he was in his 70s, he was in a bad bicycle accident and was forced to live with the pain after, using a cane and a walker. Years ago, he faced and fought off cancer of the mouth.

For the last year and a half, Grobbe had been bed-wridden. Curtis and her husband, who died in 2008, kept up with Grobbe, with visits happening each direction. “His mind was sharp,” she said. “I talked to him two weeks ago.”

As he took a turn for the worst last week, his family was called in, and he was put on morphine. He died essentially of natural causes. He died this morning at 2 a.m. He will be cremated on Saturday.