Sir Oliver Humperdink has just returned from a trip to the Pro Wrestling Hall of Fame, and he is in awe.

The Minneapolis native jetted out to Albany, NY, last Friday, and made the short trek from there to Amsterdam, home to the PWHF. 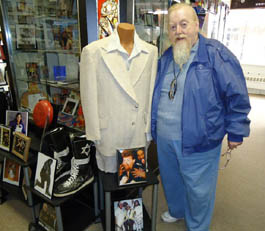 Sir Oliver Humperdink stands with a display of his memorabilia at the Pro Wrestling Hall of Fame in Amsterdam, NY.

It was SOH’s second trip to Amsterdam, following the induction ceremony this past June for his good friend Mark Lewin, who was inducted into the Tag Team category with Don Curtis in 2009, but was unable to attend.

“I had been there last June but I really didn’t get a chance to look around,” Humperdink told SLAM! Wrestling.

Humperdink was originally going to come in for a fundraising dinner for the Hall of Fame in New Jersey on Saturday, October 30th, but that was postponed because of a conflict with the hotel.

“Tony gave me the guided tour, and he told me how they acquired this or that, what the background was on a lot of the stuff. I found it fascinating,” SOH said. “I like to think of myself as a student of the business, and know a little bit about its history. I was just overwhelmed by the things that they have, and the job they are doing to preserve and keep our history alive.”

Of particular interest was the exhibit for the late Bam Bam Bigelow.

Vellano and vice-president Mike Capano have long suggested that the old buildings that the Hall occupy in downtown Amsterdam are haunted, especially the Bigelow display, and that of “The Missing Link” Dewey Robertson.

The Ghost Hunters TV show has plans to explore the phenomenon at the PWHF, but has yet to start filming.

Humperdink was there during the day, and said he didn’t feel anything amiss — but did get to share a moment with his old charge who died in 2007.

“I stood there for the longest time. In my mind, I was kind of talking to him. But I never got the vibe, that something’s around or some kinky vibe,” he said. “I spent a little bit of time in front of his display and talked to him a little bit in my own way.”

At the signing on Sunday, with proceeds going to the PWHF, Humperdink was joined by dedicated Hall of Fame supporters “Irish” Davey O’Hannon and Pete Sanchez, who drove in from New Jersey.

“Davey I had known for a while, but Pete I hadn’t met until last year at Cauliflower Alley,” Humperdink said of his friends. “Pete and I hit it off like we were two brothers from different mothers. Once in a while you meet people like that, you’re just kindred spirits. That’s the way it was for Pete and I.”

Having been to Charlotte for the NWA Legends Fan Fest for a reunion of the Hollywood Blonds (Jerry Brown and Buddy Roberts) in August, the Cauliflower Alley Club back in April, and Amsterdam in June and October, Humperdink isn’t sure what next year holds — other than Las Vegas for the CAC in April.

“I just wish I had the cash to do everything I wanted to do,” he admitted.

Greg Oliver really enjoyed hearing Sir Oliver Humperdink say, “I’m a SLAM! Wrestling mark all the way.” But Greg couldn’t find a way to work it into the above story. Oh well.