Angelina Love has seen a great deal of success in TNA Wrestling. At this Sunday’s Bound for Glory pay-per-view, the current Knockout Champion will be looking to continue her winning ways. SLAM! Wrestling recently had the chance to sit down with Love and learn what it’s like to be a Beautiful Person. 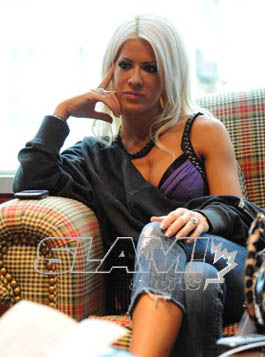 Angelina Love recently in Toronto to face the media. Photos by Mike Mastrandrea

That, of course, refers to the Beautiful People, Love’s tag team along with her partner Velvet Sky. One of the most popular acts in TNA, the team recently reunited after engaging in a lengthy feud. When Love was forced to take a hiatus from TNA last year due to visa issues, Sky recruited Madison Rayne to take Love’s spot. In January, Love returned and made it clear to Sky and Rayne that she was none too impressed about being replaced. After Rayne recruited the services of Tara, she turned on Sky, leading to her reunion with Love.

Whereas the team started off as being quite villainous, taking every opportunity to put down other Knockouts, both physically and verbally, the duo have now taken on a more fan-friendly approach.

“It’s been different working as a babyface,” Love said about the change. “I was very skeptical at first, because it’s so easy to do that character as a heel. But the fans really accepted it, and they’ve been really happy about it, especially to have us going against Madison.”

At the pay-per-view, they will get another chance to square off against Rayne, though in a fairly unique match. Instead of a tag match pitting the Beautiful People against Rayne and Tara, the match will be a four-way singles match for Love’s Knockouts title featuring those women.

The opportunity for Sky to win the belt adds a dynamic to the match beyond a typical tag team encounter. Love didn’t comment on that, however, only hinting that “it will be interesting to see what happens” on this Thursday’s edition, a rare live episode that will be the final show before the pay-per-view.

The last show, but not the last appearance. Indeed, as is customary whenever TNA holds a pay-per-view event outside of Orlando (Bound for Glory emanates from Daytona Beach), they will be holding a “Fan Interaction” session the day before the show.

“I love when we travel for pay-per-views,” said Love. “It’s always fun to meet the fans in all the different cities. And, of course, this is one of our biggest events of the year, so there are going to be a lot of festivities. Every pay-per-view is important, obviously, but this one is always so important for the company.”

The fact that a women’s match is being given such a prominent spot on a high-profile card isn’t surprising for TNA fans. Unlike in WWE, where often the biggest shows include no women’s matches, or worse, the matches are given so little time that they are made to seem as unimportant, TNA prides itself on its women, and has since the Knockouts Division was launched at the same event three years ago.

“I think it’s wonderful,” said Love, “especially for all of us girls who are in it because we love the business and wanted to be wrestlers. I’m sure at first when TNA tried it, there was some question as to whether it would work out, but it really took off.” 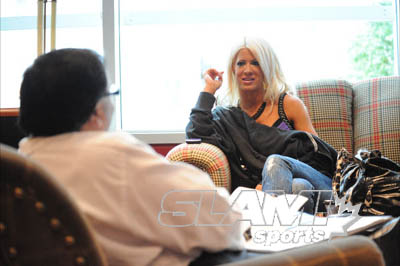 The Knockouts are treated not as a novelty, but rather as a serious division on all of its programming. Including a new pay-per-view exclusive special, Mad Sexy, which premiered at a special event hosted by Viewers Choice Canada, and that Love attended. That show represented why exactly Love is proud to be part of the roster.

“We have girls that look different, have different styles, and that can really go out there and wrestle. The cool thing about the Knockouts Division is that it shows that fans still believe in women’s wrestling, and they want to see girls who can really, quote-unquote, wrestle like guys, can really throw down, and make it look good.”

Of course, wrestling at that level is bound to take its toil on the body. Fortunately, Love is still very healthy and doesn’t foresee herself leaving TNA in the near future.

“I know that I’m not going to be able to wrestle forever, that my body will one day not let me continue to do it,” she said. “But, my body is still moving, I’m not burned out on travel, and I still love it — it’s still fun. So I definitely want to keep doing it.

Fans of the Beautiful People would certainly agree. In fact, an online search reveals plenty of websites devoted to the team. Unfortunately, along with that comes the problem that plagues many celebrities today, that of people posing as them on fake online sites. Love hasn’t been spared.

“Can I clear up some things?” she implored. “I want my fans to know this. I do not have FormSpring, I do not have Beebo, I do not have Twitter — there is someone who is posing as me on Twitter. I have a Facebook page,” she continued, “but it’s just for friends and family. The posers are ridiculous. I’ve actually written some of them, telling them, ‘You suck, get a life, and stop imitating me.’ Then,” she laughed disbelievingly, “they get mad at me!”

“(For fans), I have a Myspace page, at myspace.com/angel_williams14, and my official fansite at angel-williams.net. I hope people check those out, because I do appreciate everyone’s support. I love the fans. They’re great … they’re,” she winked, “beautiful.”

TNA Bound For Glory is on pay-per-view this Sunday, including in Canada on Viewers Choice.