Blast From the Past: Dagmar’s Night Out

Digging into the archives of writer/photographer Roger Baker, we revisit a Wrestling Revue magazine article from June 1969 on Little Darling Dagmar. Check out Roger’s story — which we vet for the kayfabe of the era (hover over in red).

The wrestling ads in the local Toronto newspapers listed mat star after mat star. Gene Kiniski was to defend his world title against Bulldog Brower. Whipper Watson and Dewey Robertson vs. Tiger Singh and The Assassin. Ivan Koloff vs. Ox Baker. The Mighty Igor vs. Eric the Red and Ivan Kalmikoff vs. Fred Atkins.

It was another typically wonderful wrestling show which Promoter Frank Tunney had lined up for Toronto wrestling fans.

The match which stirred the fans’ interest the most, however, was the pairing of Darling Dagmar vs. Diamond Lil. The midget girls had never been to Toronto. Dagmar’s publicity release showed a photo of a cute, somewhat plump looking blonde in a cheesecake type of pose giving only two dimensions, her weight, 86 pounds, and height, 41 inches.

I was determined to try to come up with an intimate glimpse into the life of one of these little wrestlers and knocked on Dagmar’s dressing room door moments after arriving this Sunday night at Maple Leaf Gardens.

“Who is it?” came the reply to my knock. 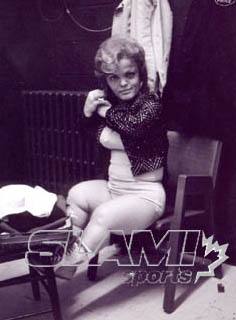 Darling Dagmar gets ready for her bout with Diamond Lil at Toronto’s Maple Leaf Gardens in November 1968. Photo by Roger Baker.

“I’m a wrestling writer and photographer and I’d like to talk to you about a layout for Wrestling Revue.”

“Okay, just a minute,” cooed Dagmar through the door. “I’ve just about got my bathing suit on.” A couple of minutes later I was called in and sat down beside the demure-looking Miss Dagmar.

After I hastily unpacked my camera for some dressing room shots an attendant rapped on her door and hollered, “Dagmar, you’re on in the next match.”

“Can I take you out for dinner after your match tonight?” I asked Dagmar. “I’d like to have a chance to get some pictures of you away from the wrestling arena, so the fans can get a glimpse of your private life.”

Dagmar slumped in her chair and quickly straightened up and replied, “I’d like to co-operate but I’ve got a date in Omaha, Nebraska, tomorrow night, and if I don’t catch a flight out tonight, I know for sure I’ll be dog tired by tomorrow night with all that last minute rushing around.” Geez, I thought to myself, there goes my opportunity, she may never be back to Toronto. However, after her match, I was relieved when she turned to me after calling the Toronto International Airport and related that she couldn’t get a flight until the next morning at 10 a.m.

We left the Gardens together and I whisked her and her very heavy luggage to a downtown hotel where she checked in and willingly posed for a few innocent pictures up in her room.

From the hotel we went to Toronto’s Chinatown district for a delicious repeat of wonton soup, shrimp, chow mein and sweet and sour ribs.

As I expected, quite a few curious glances were levelled in the direction of our table.

Under such ideal conditions, it was very easy to get some interesting facts about Dagmar and her career.

Dagmar’s real name is Kathy Last (NOTE #1). She was born in Winston Salem, North Carolina, 26 years ago. She has been on the pro circuits for 8 years and learned how to wrestle professional by working out with the Fabulous Moolah, who trains girls who are interested in becoming professional lady wrestlers.

Dagmar worked out and trained for her professional debut for seven months, and train she did, often putting in many a ten-hour day to learn her craft.

If anybody in the wrestling business travels more than Dagmar and her regular opponent, Diamond Lil, to keep mat engagements, Dagmar would like to know who they are. During the months of June, July and August of 1968 she wrestled in Texas, Oklahoma, California, Vancouver, Canada and Washington State. During this period she wrestled in as many as 7 times a week and traveled 2,200 miles in one week when she was in Texas. When this tour ended, she flew home to Winston Salem for a six week vacation.

Dagmar only manages to get home 3 or 4 times a year to visit her family and friends. She has two older sisters who are normal size and a younger brother who is 6 feet tall.

Dagmar is a very feminine young lady and enjoys cooking when she gets home and designing her own ring jackets which number about 15. She is also very fond of most water sports and particularly enjoys water skiing, a sport she can indulge in during the summer in North Carolina, or when in Florida or Hawaii, she loves to go surfing when in the latter state. 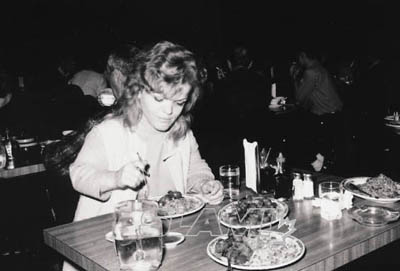 Darling Dagmar chows down after her match in Toronto.

Dagmar hasn’t much time for dating because of her demanding schedule and time table traveling, however, she does like boys, the ones who are sincere and don’t ogle or poke fun. Surprisingly, she has never really been in a ticklish situation with sex-hungry males who try to take advantage of her. “Lots of guys make passes at me but usually they are only kidding around, but just the other night in Detroit, Michigan I had some disgusting words levelled my way by quite a few creeps in that city, but I always have a tart reply for wiseacres like that and tell them to button your lip, mister or I’ll haul off and smack you one in the mouth. Surprisingly this often works.”

“There have been quite a few proposals though, there was one in Dallas, Texas, last summer also in Los Angeles, and one from my home town.

“I didn’t take any of them seriously, though, except maybe the one back home half seriously. I’ve got kind of a special fellow back home. Sure I want to get married someday, and have kids and all that, but I’ve got a restless nature and when I stay home a few weeks at a time, I start getting itchy feet and have to get on the move again.

“I know from many instances that I’ve seen that lady wrestlers and marriage very seldom work out.

“I think when I’m about 35 I’ll be ready to settle down, quit wrestling and get married.”

Eight years in the wrestling wars have not let Dagmar go uninjured. Once in Shreveport, Louisiana, she was thrown out of a ring and cracked her head open on the arena floor. A doctor had to put 18 stitches into her head to close the gaping wound. However, two weeks later this tough little girl was back wrestling. She also had her ankle broken a couple of years ago somewhere down in the deep south.

The next morning following her match in Toronto I picked Dagmar up at her hotel and took her out to the Toronto International Airport to catch an early morning flight to Omaha, where she was to wrestle that night. It’s about 1,000 miles from Toronto to Omaha. Dagmar was looking forward to the Omaha date because then her bookings were completed for two weeks and this would allow her an opportunity to get home again and have a much-needed rest.