One would think that a star grappler known as the “Marilyn Monroe of midget girls” would crave the spotlight. Yet the wrestling world had heard little of Kathy Moreland — Darling Dagmar — over the last few years. 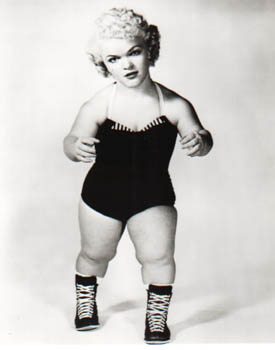 It took the death of her husband in 2009, after 34 years of marriage, to start listening to a select few wrestling friends who had kept in touch.

In March, she went to her first Gulf Coast Wrestlers’ Reunion in Mobile, Alabama, and in April 2011, Darling Dagmar will be presented with a Women’s Wrestling Award (Retired) by the Cauliflower Alley Club.

“I only just got started back into the wrestling again. Some old friends that I’ve been contacting, they’ve been telling me about the Cauliflower Alley Club,” she said. “I didn’t go around wrestling that much after I retired in 1977.”

She started to work for South Carolina Educational Television, which is a public broadcaster. Her roles varied through the years, and included viewer services, traffic director (moving tapes back and forth, scheduling taping), programming (working with the director, making the schedules), communications (making interstitials between the programs). 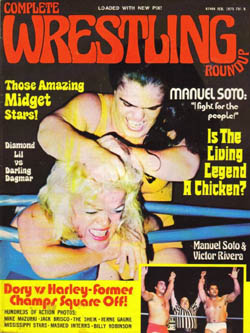 The family was a bit protective of the little person in their midst, she admitted. “It was a mixture. They were sort of protective in a way. My mom would say, ‘If you want to do it, do it. Do it on your own.’ In a better phrase, she was holding me in the nest, but pushing me out at the same time — which was wonderful. At the time, I didn’t understand it, but many years later. Because I’ve met a lot of little people that are sort of introverted because the parents and the brothers and the sisters or whatever just held them in the nest, wouldn’t let them go out on their own.”

Kathy was only finishing high school in late 1959, early 1960, when professional wrestling came into her life.

“A girl who was training with Moolah at the time … she had seen me going to school. Moolah was looking for a little person. There was another girl down here training at the time. I don’t remember her name, but she was training at the same time. I told my mother, ‘She’s a little person that looks just like me,’ — body structure is what I’m talking of,” Dagmar recalled. “I had never been interested in wrestling before.” 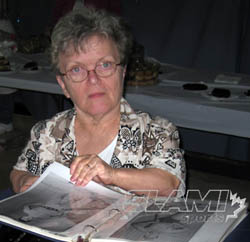 After training under Lillian Ellison — The Fabulous Moolah — and her then-husband Buddy Lee, Darling Dagmar debuted April 18, 1960 in Birmingham, Alabama. The demand was there for little people wrestling, and by August, she was working in front of a huge crowd at Comisky Park in Chicago.

Publicity came quickly too for the blonde-haired Southern belle. A November 1960 story from Idaho promotes her as “Little Darling Dagmar, a pert combination of midget muscle and beauty, billed as the Marilyn Monroe of the Midget Girl Wrestlers.”

Traveling was one of the perks and the drawbacks of the job.

“It wasn’t hard, uh uh. Well, let me back up on that. I just told a fairy tale. It was sort of hard. It wasn’t hard to travel, but it was meeting the deadlines. If you’re flying somewhere and the plane got cancelled, the flight, I’ve had that happen three or four times over the years. And then the promoter looks at you like you’re crazy. I said, ‘Hey, the flight got delayed. The flight got cancelled,'” she said. “There were so few little people wrestlers around that it was hard to call up a substitute real fast.”

There are few places she never wrestled. “I liked to wrestle in California, the L.A. office as well as the San Francisco office. I liked Texas. I liked the Tennessee territory, not so much the money, but I just had a lot of good friends there. And you could stay there a while because the territory was so big.”

Dagmar was quick to defend her style. “I didn’t do that much comedy,” she stressed. “When I went in there, I went in there to wrestle.” Blessed with natural strength, she could easily toss around her opponents, or boost them for airplane spins.

As needed, she could portray either side of the ideological fence that made up pro wrestling in the kayfabe era.

“I can be the good ‘guy,’ the bad guy and every once in a while I can even be ugly,” she said in a 1975 newspaper interview. “It all depends on who I’m wrestling and how I’m doing. If I think they’re gonna beat me, or somebody’s got me cornered, I’ll come out fighting.”

“That changed over time. I started doing the bookings myself,” she said, agreeing that she got tired over sharing her hard-earned money with Moolah. “I was different. I haggled. After a few years, I haggled, and I got what I wanted, let’s say it like that. I didn’t care who got what; I was looking after me.” 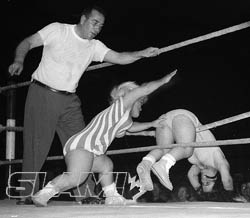 A little discipline for Baby Cheryl in a 1964 Calgary bout, as referee Bob Franks moves in. Photo by Bob Leonard

On March 15, 1975, Miss Kathy Carlton married, a ceremony featured in the wrestling magazines. Two years later, she made the choice to quit.

“I do not regret it. I wish I’d have done a few things different,” she admitted, singling out her lack of planning towards retirement. “I enjoyed it. I did. It had its moments — any job has its moments.”

Blast From the Past: Dagmar’s Night Out