Wrestlers aren’t supposed to be eloquent, and when I was growing up they certainly were never bestselling authors. But Mick Foley is a different kind of grappler — he’s both of those and more. The proof is his latest book, officially out tomorrow, Countdown to Lockdown: A Hardcore Journal, which is a tremendous read.

This tome isn’t too long or too short, although the author tends to belabor some points and at times he circles around what he’s talking about but hey that’s the way Mick is. Fans of his know that so nobody will care as long as the content is honest and genuine — and it clearly is. 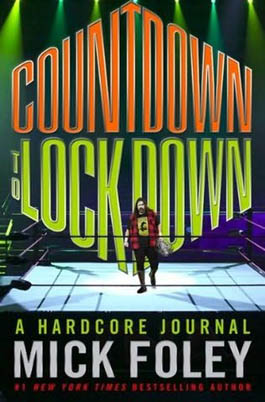 I don’t think there are any “earthshaking” revelations about failed drug tests or who hates who so I don’t think he’ll be in any hot water when this hits. And I certainly don’t think this will affect his possible induction into the WWE Hall of Fame which he certainly is worried about.

I think the beauty of this book is the way that he is self-effacing on one hand and a typical ego-driven athlete on the other. Foley is humble — don’t get me wrong — but I think readers will get the feeling that he should have hung up his boots for the last time many years ago because of all of the injuries that he’s suffered over the years. After reading about some of them in great detail I think he should have retired at least five years ago.

On the Monday Night Mayhem internet radio show, Foley talked about how it all came together.

“I had reached an agreement with Grand Central Publishing to do a book, and I pitched it based on one chapter, which wasn’t a wrestling chapter. It was a chapter and outline, and then I was faced with the challenge of finding something to write about,” he said.

His focus became the 2009 Lockdown pay-per-view and his Six Sides Of Steel TNA World Heavyweight Championship Match against Sting.

“I think it worked out well that I had this big match coming up, but my editor’s fear was that it was going to feel a lot like The Hardcore Diaries, and I said it was kind of designed to be a bookend because it is a similar structure, but the stories are completely different. I think it’s the first TNA book, and it is a big departure from WWE, and it’s a completely different story, and people are going to get to see comparatively how the two organizations work leading up to a big match. I’m lucky it was a really interested match for me, it was one that I had a lot of apprehension about, but fortunately it worked out really well.”

Personally, I love the Long Island references since I grew up there as well. Cactus Jack was always a legend in my parts and I was touched to see that Mick had dedicated this book to his dad, “The Original Cactus Jack.” I have been to WWE events and he’s always been the same guy that he talks about in the book. When I got this book from him, we were chatting about our hometowns like we were old chums because he is a regular guy.

And if you don’t think he’s a regular guy with a love for wrestling, then get this book because you will see that he really — even if he has a bit of a death wish.