Take a year and territory, throw it in a time capsule, and you have Mark James’ Memphis Wrestling History Presents 1982. A near perfect 434-page collection of stories, newspaper and program clippings, photos and interviews chronicling the Memphis wrestling territory in 1982, Memphis Wrestling History Presents 1982 is a must for any old-school fan’s collection. 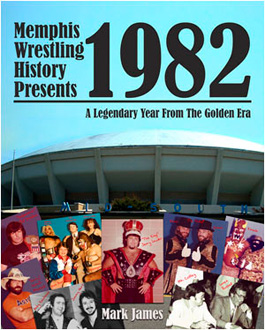 The territory and year were most famous for gathering national attention for the Jerry Lawler-Andy Kaufman feud. It was that year the duo used NBC’s Late Night with David Letterman to cloud the mystery of reality and theatrical in the world of wrestling, a stunt that even fooled insiders in the business. Although this will always be remembered, the year was filled with booking nearly every date on the calendar. Having been a fan of the Memphis promotion since the 1970s, it was an ideal year for James to choose.

“1982 didn’t slow down all year,” James told SLAM! Wrestling. “It was one big angle after another. My book is like a microscopic look at 1982 in Memphis wrestling.”

Like a diary, the book documents matches and angles through newspaper clipping, program clippings, interviews and photos. It was a year that saw the emergence of personalities like Jimmy Hart, Jim Cornette, Fabulous Ones and Randy Savage. The book also documents Ric Flair’s appearance, as NWA World Heavyweight Champion, on Memphis television to challenge Jerry Lawler. It would be the only match between the two during their primes (they would have a throwaway match on WWE RAW in 2004). The book would also feature the AWA World Heavyweight Champion Nick Bockwinkel winning the Southern Heavyweight title, as well as the merger of Angelo Poffo’s International Championship Wrestling (ICW) with the Memphis territory.

Jerry Jarrett, Dutch Mantel, Cornette, Austin Idol and Jerry Calhoun are among those who tell inside stories about angles, matches and memories. Jarrett shares the story of a call he received from wrestler and promoter Bill Watts praising Jerry Lawler supposed injury of actor and comedian Andy Kaufman. The angle between Lawler and Kaufman was so perfectly done, insiders even believed it to be real. It was a different time, and a similar angle today would never get the same reaction.

With the Kaufman appearance on Late Night, Lawler was at his peak in Memphis. Matches with Kimala, Randy Savage and Iron Sheik were drawing over 8,000 fans on a weekly basis to the Mid-South Coliseum. Lawler often shared the main even spot with Bill Dundee, Jimmy Valiant and Dutch Mantell, who were the four hottest faces in the territory in 1982.

Thirteen years before the nWo would invade WCW, Memphis tried a similar angle. When Angelo Poffo, with sons Randy (Savage) and Lanny, opened the ICW in 1979, they unwisely chose Kentucky, where the Memphis territory already successfully ran. The two would untimely work together in 1984 but the book tells the story of when Savage assaulted Dundee in a gym parking lot. The reader really gets the always true story of wrestling: money is the bottom line for everything. When the ICW was bleeding money, the two would work together, putting together a long and successful series of angles and matches. Although Memphis Wrestling History Presents 1982 is two years before the two promotions would work together, it describes how dirty competition was in the territory days.

The book, because of the great detail, allows the reader to follow exactly how a territory would build up a new challenger for the local heavyweight title. Wrestlers were often shifted from territory to territory, allowing bookers the ability to build up a new challenger on a monthly basis. Although only the Mid-South Coliseum card results are listed, the reader can see how they slowly build up a challenger.Although Memphis Wrestling History Presents 1982 is over 400-pages, because it is filled with photos and clipping, it does not come off as overwhelming. It is one of those books that can be picked up anytime, opened to any page and the reader will get something out of it.

James told SLAM! Wrestling that he wished he was able to get Ric Flair for the book. Surprisingly, Lawler’s comments are nearly absent from the book. James said that Lawler has often shared all the stories he has in past interviews and he would have hated to ask him to go over the same things again. But because Lawler is present throughout the book, it was disappointing to not have him comment more on certain angles and matches.

Because of the age, it would be nearly impossible to pull this off with any other territory more than 20 years ago. When asked, James would enjoy doing a similar book on the WWE in 1984 or Mid-South Wrestling in 1984 through 1985. James has been “pleased and somewhat surprised” with the reception of the book. But James did it right, he put in the time and research, and the results speak for itself. Even for someone like myself who has only seen a handful of individual matches and angles from Memphis in 1982, Memphis Wrestling History Presents 1982 is a wonderful scrapbook of history from one of the most action-filled and creative years from a promotion.