VAUGHAN, ON – Storytelling is perhaps the most rapidly growing trend in professional wrestling today. And just as important as the stories told in the ring by the young stars of this generation, are the stories told outside the ring, by the retired legends of the business.

Some of wrestling’s biggest stars from the past were invited to Toronto on September 18, to a benefit to raise money for the Pro Wrestling Hall of Fame in Amsterdam, NY. Many of them traveled great distances to be there, but none of them could pass up the opportunity to share some of their fondest memories with friends, family members, fans and other wrestlers.

A good time was certainly had by all, as they applauded and cheered in appreciation for any wrestler who had an interesting story to tell. Maybe the most passionate of the bunch was the “Sensational, Intelligent Destroyer” Dick Beyer, who to this day, still wears his mask.

Of course the hall of fame was his main reason for being here as Beyer — Class of 2005 — is heavily involved in promoting it, as it’s in his home state first of all. And also, because he simply loves the wrestling business and has the utmost respect for anyone who has the same passion and dedication that he does.

“I’m very involved in the New York state Hall of Fame, which was formed in my state. It started in a building that was at the address of 123 Broadway Ave. But in pro wrestling, if you’re going to promote any big show, it’s got to be on Broadway and 123 of course was the count, and I thought that building was the ideal spot,” he said. “Eventually the promoter of the wrestling hall of fame, moved it to Amsterdam. WWE has a hall of fame, but they only have that in name. There are many people who have been inducted into the WWE Hall of Fame. This is actually a building where wrestlers who have memorabilia, can put it in.”

Ricky Johnson may have at least two generations of memorabilia to donate, as he is the brother of Rocky Johnson and of course, the uncle of The Rock. But on this night, Johnson was simply there to catch up with old friends, meet new acquaintances and generally let the good times roll. And surely enough, with a nickname like “Soulman,” he would not be at a loss for words.

“It’s an honor to be here and an honor to be part of it and I wouldn’t rather be anywhere else except right here with these wrestlers,” Johnson said. “This is a real pro wrestling hall of fame and not just a company hall of fame. This encompasses all professional wrestling.”

The wrestlers may have been in the spotlight this evening, but there were some notables in attendance, who have been in the business for just as long and deserve just as much recognition, such as former WWE referee Jimmy Korderas.

“I’m really glad that they have a hall of fame to create memories for the legends of the business. It’s a shame to see them go away and to never be seen again, so it’s a great place to preserve those memories,” Korderas said.

It’s one thing to catch everyone’s attention, but it’s another thing to keep it. Beyer did just that, as he quickly became the life of the party with a story that had everyone laughing hysterically by the end of it. It started with himself and Andre the Giant on a road trip to Chicago, when the Giant kept demanding more beer. About three cases later, Beyer’s nine beers were certainly no match for Andre’s 63, but Beyer found it weird that Andre never needed a bathroom break.

Keeping the ball rolling was Dominic Denucci, who had an interesting story about living in Pittsburgh with a Canadian passport. And when the time came to cross the border back into Canada for this event, Denucci presented his passport to border patrol and when the officer asked him what he does in Pittsburgh, he responded “nothing.” The crowd still had some energy left over, after the doozy that Beyer told, while all trying picture the look on the patrol officer’s face.

One of the biggest attractions of the evening, especially for younger fans, was former AWA Heavyweight Champion and WWE Tag Team Champion Rick Martel. Martel was all smiles just looking around the room at all the familiar faces; in particular, he singled out “The Wolfman” Willie Farkus, who he worked with in the Maritimes in his second week in the business when he was just 17 years old — and hadn’t seen since. And being in Toronto brought back some of his fondest memories. 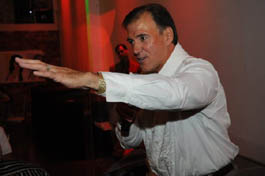 Rick Martel shares a story with the crowd at Titans in Toronto 4. Photos by Mike Mastrandrea

“I’ve wrestled in Toronto many, many times as both a babyface and a heel. It’s always a pleasure to work here. The people here are great wrestling fans, so it’s a great place to wrestle,” Martel said. “Wrestlemania 6 was so exciting to be a part of. I wrestled against Koko B. Ware that night and it was amazing. There were over 60,000 people and it created a lot of great memories. We were here that entire weekend and wrestling that weekend was so exciting, because it got a lot of adrenaline going.”

Korderas was also happy to be back in the city where it all started for him. He would later referee some of the biggest matches in the WWE, and owes it all to his experience working in Toronto and his overall passion for the wrestling business in general.

“Just seeing the guys I grew up watching in Maple Leaf Wrestling in the ‘70s. You have Tiger Jeet Singh, Bobby Bass, Reggie Love. These are the guys I grew up watching. They made me fall in love with wrestling. So for me, this is great,” Korderas said. “I love wrestling and I love the business and I loved my time there at the WWE. But if you can combine being at home every night with a wrestling gig, that would be the best job in the world. But unfortunately you can’t do it, because you have to travel, but it’s also great to travel and see all sorts of different places.”

Passion is something that nobody can really put a price on. And to prove that point, there were some guys there with canes and even crutches, who still wouldn’t miss this night for the world. One of them is a man simply known as Big Mac (Mervyn McKie).

“The good thing about the Pro Wrestling Hall of Fame is that they get all the artifacts from the older days, which they can preserve, so everyone can go there and see all of these great things,” Mac said. “This is a great way for the older guys to have something to look back at and for the younger guys to see how wrestling was created and learn about some of the guys that were there before them that made life a lot easier for them. A lot of guys were really good to me when I was young and coming up and I’m hoping to do the same thing for a lot of these younger guys who are coming up.”

Even with his family being as popular in the wrestling business as they are, Johnson also takes the time to acknowledge the legends who preceded him.

“This is for the real pro wrestling hall of fame. We came here tonight to honor all of our brothers and sisters who were here before us,” Johnson said.

Martel was already a big hit, before he had even arrived. But as the night went on, his popularity would increase by the minute, as he gave everyone he encountered a few moments of his time for pictures, autographs and friendly chit chat.

“There are so many guys here that I respect. It was fantastic to see everybody here and share memories and professional wrestling is a special kind of profession and it’s good to come and see everybody. There are so many great wrestlers who are gone now and it’s important to come out and see each other every once and a while. It’s an honor for me to be part of all this,” Martel said. “The Pro Wrestling Hall of Fame is important, because it keeps the history of wrestling alive and if I can contribute in any way I can, I will.”

They may be retired, but their memories will live on forever, thanks to the Pro Wrestling Hall of Fame.