Perhaps it was because of his size or the fact he was content to live a quiet life in retirement, but for one reason or another, the news of the recent passing of midget wrestling star Little Brutus somehow slipped through the typesetting cracks of the mainstream media not to mention the wrestling fraternity. 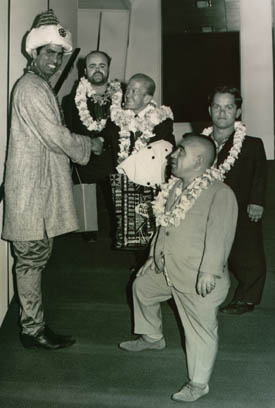 Jean Jacques Girard started his wrestling career as Tiny Tim in the early 1950s and later became Little Brutus for the latter part of his career. He died in Montreal, Quebec on April 1, 2010 from complications resulting from a major operation several months prior.

I touched base with Brutus several years ago for a few quotes for an obituary piece I was writing on Pee Wee James. I can still recall the surprise and sadness in his voice when I advised him of his old friend’s passing. The pair had started out together in the glory days of midget wrestling. Perhaps realizing his own mortality, he agreed to do an interview on his own career at a later date.

One of the joys of researching stories from that era is the opportunity to reconnect with your own past. The research on the stories I write today actually began over a half-century ago when as a young boy I was a regular at the weekly matches at our local arena.

As I grew older and gradually left this make-believe world for the real world, I never forgot that period and all the old wrestlers who gave me so many fond memories and enjoyment in my youth. When Greg Oliver invited me to write about that earlier era and focus on the old-time wrestlers, it was an assignment I couldn’t refuse.Growing up in a small Eastern Ontario town didn’t give me the opportunity to see many of the major stars like Yvon Robert and Wladek Kowalski who performed a hundred miles down the road in Ottawa. But every wrestler who came to our small town became a hero in our minds and soon carried the same name recognition. 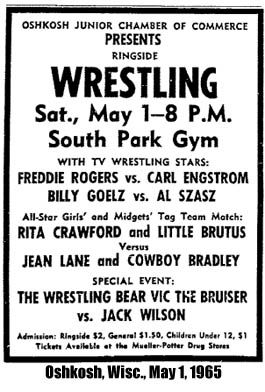 It became a challenge starting with a ten-digit phone number to put together a story that happened 50 years ago. But the more stories I wrote and the more reaction I got from readers and the wrestlers and their families, I realized that I was not only recording the history of the mat world but that I was repaying a debt to the many old wrestlers who had once entertained me as a young fan. 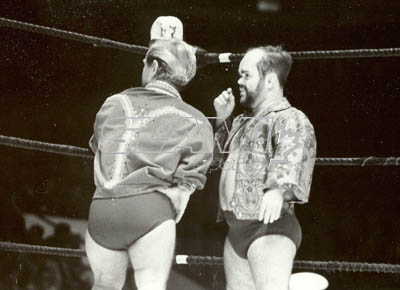 The payoff can never be measured in financial terms. Recently I interviewed 85-year-old Dave Sims, a former Central States and Heart of America champion. I sensed during the interview that Dave had forgotten a lot of his own exploits. Later, his grandson remarked that a smile spread across his grandfather’s face when he read the article to him and that it was a great occasion to bond with the older man and appreciate his career as young man. 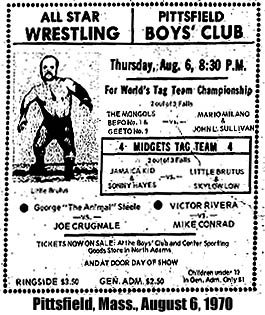 The joy of watching these professional wrestlers in their youth and many years later sharing memories and stories with them and the sadness of learning of their passing runs the gamut of emotionsOften one door opens another. Researching a story on Pee Wee James led me to an interview with Little Brutus which resulted in a story on Cuddles Anderson.

I remember catching Little Brutus off guard with news of his friend Pee Wee. Perhaps there was a sudden realization that there is mortality among even the mighty mites of the mat.

And now the bell tolls for yet another little warrior. Et Tu, Brute? Yet there is no sense of betrayal for he always gave fans a larger than life performance.