If there is one segment of professional wrestling that many fans miss more than any other, it is surely midget wrestling. Numerous mighty mites of the mat have been responsible for perpetuating that memory and none more so than a pint-sized grappler who plied his wares as Little Brutus.

In a peer group that was low in numbers at the best of times, it is becoming increasingly difficult to get a first hand account of the midget scene as it once was. The ides of March were not yet upon us and luckily Brutus was in a talkative mood on a cold, snowy day in January when I caught up with him by phone at his home in Iberville, Quebec. 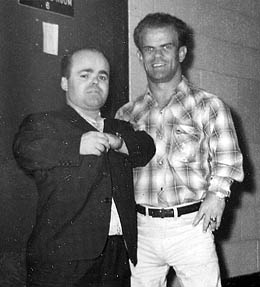 Whenever diehard wrestling followers meet to dissect the many intricacies of the game, the talk invariably turns to the midgets. By now the stories have been retold many times and recollection of all the favourite stars has evoked nothing but warm memories.

As midget wrestling soared to new heights in the 1950s, young stars like Lionel Giroux (Little Beaver), Marcel Gauthier (Sky Low Low) and Raymond Sabourin (Pee Wee James) came out of Quebec to give the genre an identity that would be forever lasting.

Jean Jacques Girard followed closely in their footsteps. He was born in 1937 in Lacolle, Quebec, close to the American border. His parents were normal size as was his twin brother. When he was not yet ten years old, the family moved to Saint-Jean-Sur-Richelieu where he would spend his formative years. Also at that time it was established that Girard had stopped growing. That startling revelation would impact heavily on the Girard family and be the catalyst for young Jean Jacques’ future.

It was the advent of television and he would often watch the wrestling matches and particularly the midgets. As an impressionable teenager, he was intrigued by the antics of these diminutive men bouncing all over the ring much to everyone’s enjoyment. But he was not fazed or intimidated by their skills. 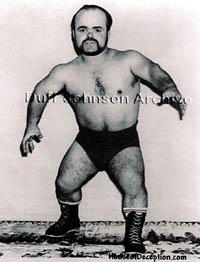 At the urging of his son, the elder Girard sought out Jack Britton at the Montreal Forum and was not shy about making his son’s ambitions known to the veteran wrestler. At that time, Britton was also managing midget wrestlers for a growing and appreciative audience. As there was a limited supply of these tiny mat men, he was always on the lookout for new talent.

Britton eventually made a special trip to Saint-Jean to take a look at young Girard. The boy was only four feet tall and weighed eighty pounds but it didn’t take Britton long to conclude that the 16-year-old was a good candidate for pro wrestling.

Girard moved to Detroit where the midgets were headquartered under Britton’s management and was quickly introduced to the rudiments of the game.

“It was Bert Rubi’s wife who named me Tiny Tim,” recalled Brutus. “I wrestled as a good guy under the name of Tiny Tim Girard for about the first ten years of my career.”

In his first match in Detroit in 1954 when he was 17, he partnered with Tito Infante against the formidable duo of Fuzzy Cupid and the Mighty Schultz. From his initial match began a magnificent career that took the young French-Canadian wrestler all over the world for the next 20 years.

Some things were inevitable in the world of midget wrestling, not the least of which was the use of names such as Little, Tiny or Pee Wee. It was also a given that because of their limited numbers, there was also necessity for duplication and repetitiveness in meeting the same opponents night after night and following the same routines.

After about ten years on the mat as a face, to alleviate the sameness and spice up his ring persona, Girard decided to turn heel and took the name of Little Brutus to forge a new ring personality.

“There was a normal size wrestler from Quebec named Jim Bernard who also worked at that time,” explained Brutus. “He was also known as Brute Bernard, so I decided to become the little brute, Little Brutus.” 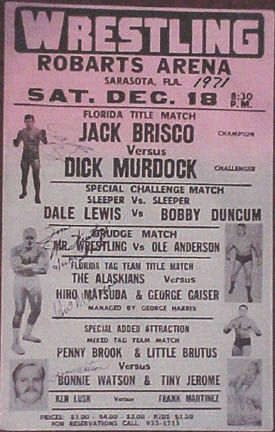 A card with Little Brutus on it from Florida in 1971.

But it made little difference to the fans which wrestler assumed the role of villain or hero among the midgets for they were all accepted as special little men in the sometimes violent world of pro wrestling. Indeed they were accepted all over the world. In ascertaining the roads traveled by the midgets, it is sometimes easier to start by asking where the wrestler has not performed.

“I never worked in Cuba,” reflects Brutus. “They did in the early 1950s but not after I came on the scene. Also I never wrestled in Russia.”

But travel he did through the empires of Kings and Queens.

“I went to Japan eight times and to Australia four times. I wrestled in England, Ireland and Scotland and throughout Europe in France, Belgium and Spain and a few more countries. I also worked in Hawaii and Alaska before and after they were States.”

The midgets were much in demand wherever a promoter could set up a ring and sell a ticket whether in the United States, Canada or Mexico as well as throughout South and Central America. Brutus and his companions traveled the length and breadth of several continents. He partnered or opposed all of the top midgets of the day including Lord Littlebrook, Little Beaver, Sky Low Low, Tom Thumb, Tiny Roe, Irish Jackie, Farmer Pete and his friend Pee Wee James. His top weight during his career was 95 pounds.

“There were only about 20 midgets in the business in the early days. When I started wrestling, I couldn’t speak English,” explains Brutus. “Pee Wee James was also French and helped me out and we became friends. But I liked them all. We had good times. We traveled together and had fun.”

As could be expected, when popular and in demand, there is money to be made and Brutus says he made his share and was able to save some. They didn’t stay in the very best of hotels but they stayed in good hotels and lived the good life on the road.

Brutus and his cohorts traveled by car within Canada and the States when not traveling to foreign countries where the promoters paid their airfare. Sometimes a normal size wrestler or a referee on the card would do the driving but later the midgets would drive themselves to their assignments.

“It was a three-day car ride out to California and I did it many times,” Brutus related. “That was probably one part of the business I didn’t like when traveling by car from Montreal to Los Angeles. We worked out of Detroit for the first ten years or so and then out of Montreal. We also traveled by car out to Calgary and Vancouver. Britton wouldn’t travel with us. He stayed in Montreal.” 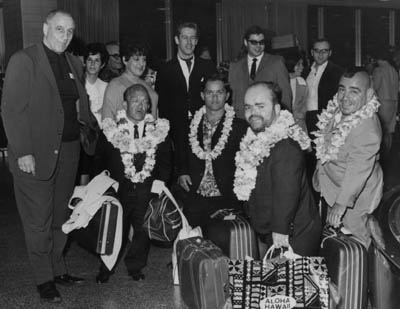 It was understandable that because of their limited numbers and popularity, the midgets didn’t stay in one territory too long. A stay of two or three weeks was normal and then they would move out.

“Some promoters treated me very well. By that I mean there were good payoffs.” Brutus offers. “One of my favourite places was working for Roy Shire in San Francisco. He paid good and treated us well plus he was honest and trustworthy. But if you didn’t put on a good show he was not so generous. He wanted only the best or he paid you poor money. Don Owen in Portland was another good promoter to work for.”

In 1954-55-56 he worked in Northern Ontario for Larry Kasaboski. Although he was treated fairly, he only received $200-$250 a week for six nights work because the territory did not attract big crowds. There were other promotions in Tennessee and the mid-west that were not his favourites. He forgot the name of the promoter in Tennessee but remembered poor payoffs. When I threw out the name Nick Gulas, there was surprise in his voice.

“How did you know that,” he laughed?

I explained that I had heard a similar refrain from other wrestlers.

“My favourite cities were Los Angeles, Portland, San Francisco and New York of course. I worked for the McMahons and was treated well.”

If the midgets had as much fun out of the ring as they appeared to have during their matches, one would expect many amusing stories from Brutus. Since pranks and ribs were rampant among the wrestling fraternity, I attempted to steer him in that direction but was met with much laughter.

“You couldn’t print some of the stories,” he chuckled. “Pee Wee James was always playing jokes. But there were a lot of pranks with water. I remember once we were staying at a hotel in San Francisco. Art Nelson was with us and our rooms were overlooking the main entrance. There was a canopy over the entrance. Art would sit by the window in his room and when he saw us entering the hotel he would throw a pitcher of water on us. One day I decided to turn the tables on Nelson. When he approached the entrance, he saw me at my window with a jug of water. He started to taunt me and challenge me to throw it. Finally I threw the water. The problem was that Art ducked out of the way and the water splashed all over a man who had just come out of the barbershop. He was wearing a white shirt and tie.”

The upshot was that the man complained to the hotel management. The manager knew that it was Brutus who threw the water. The manager on occasion had participated in the water pranks. But rather than single out Brutus as the culprit, the manager paid the bill for the man’s dry cleaning and the matter ended. 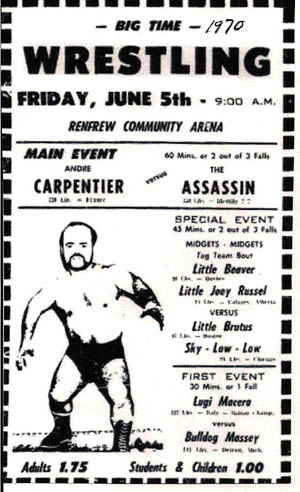 A card with Little Brutus on it from Renfrew, Ontario, in 1970.

“The manager was a good guy,” states Brutus.

Without hesitation he considers Sky Low Low as the best midget wrestler and Little Beaver as the biggest star. As an afterthought he throws in Lord Littlebrook’s name.

“He was also very good,” adds Brutus, “for an Englishman.”

He admits that he made a lot of money as did most of the midgets. After all expenses he managed to save some for his post-ring days. But he also admits he and his friends threw a lot of money around carelessly.

“I recall one time we had returned from Japan with lots of money after a tour. We were working in Los Angeles when Pee Wee James and I decided to go to Las Vegas. We played cards and dice and the one-armed-bandits. About six in the morning there was a knock on my hotel room door. It was Pee Wee asking if he could borrow ten dollars,” he laughs. 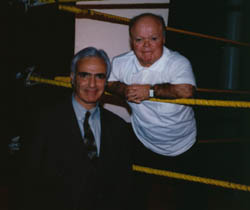 After 20 years, Brutus came off the road and wound down his career around his home area for the next four years. In 1974 he took a job as a police dispatcher and retired from it in the mid-1990s. Before retiring from active wrestling, he trained another midget wrestler named Claude Giroux who worked as Tiger Jackson and later Dink the Clown in the WWF.

Today, Brutus lives out his retirement in Iberville with his wife, a normal size woman he married in 1985. Though some wrestling fans remember him as Tiny Tim Girard and others as Little Brutus, he has no identity problems.

He’s secure in the knowledge that after working in wrestling rings around the world for two decades, his life and career have been anything but minuscule.