It all started for Mike Mooneyham when he was 12 years old. Like any adolescent youngster, he was very energetic and always eager to learn something new.

Mooneyham went to school, just like every other kid and got in his fair share of trouble. At that age, kids start to divide their interests, whether it’s cars, sports, girls …. But Mooneyham’s interests may have been a little different from anybody else his age. His two passions were writing and wrestling, so one day he decided to combine the two and never looked back. 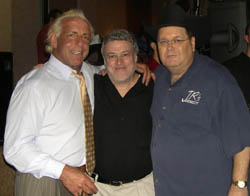 “I was a pretty good writer, even as a kid,” Mooneyham recently shared with SLAM! Wrestling. “I really got hooked on wrestling at a young age and I would submit some columns to the bulletins and magazines throughout the southeast.”

Now at 55, Mooneyham works as a columnist for the Charleston Post and Courier. He goes to work, reads the morning paper and enjoys the same leisure activities as anyone else. But as soon as the tape recorder starts running and pen meets paper, Mooneyham takes it up a notch.

“I usually get to take the interview where I want it to go,” Mooneyham said. “I guess it all depends on the interviewer’s experience. A lot of the guys I interview are close friends of mine and even with the younger guys in the business, I’ve been close friends with some of their fathers and grandfathers before them.”

Mooneyham says he tries to be fair and objective with every interview he does and he thinks most wrestlers respect that about him, the same way he respects it when a wrestler tells him that something is off the record.

“I feel that when someone tells me something in confidence, they are putting their trust in me and I respect that,” Mooneyham said.

Pro wrestling journalism has existed just as long as the wrestling business has existed. Someone had to be able to spread the word, for the business to be as big as it is today. Wrestling is now covered in newsletters, on the Internet, on the radio and on television. Just like the business itself has evolved, the wrestling journalism business has evolved as well, to the point where reporters are able to capture behind-the-scenes breaking news, which would have been unheard of 50 years ago.

Perhaps nobody knows more than Mooneyham how much the business has changed from the other side of the window. He’s experienced decades of interviews with many different personalities and says overall, it’s been a pleasurable experience. 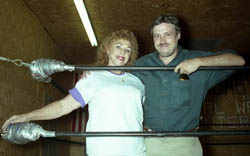 The Fabulous Moolah and Mike Mooneyham.

“The interviewer’s job is to know who they’re talking to and try to get as much out of them as possible,” Mooneyham said. “I’ve had a lot of great interviews and it’s hard to choose a favourite. It’s almost like choosing a favourite out of your children.”

Print journalists are usually at a big advantage over other journalists, because they have the most time to get a good interview. Kevin Eck can agree with that, as he went the distance with several of his interviewees and rarely had any problems.

Eck is the assistant sports editor for the Baltimore Sun and he recalls an evening where the WWE had a Smackdown taping in Baltimore. He was scheduled to interview The Rock, who had just finished filming The Mummy Returns. Eck said there was a blizzard that night and it was one of the only times that Smackdown had to be postponed to Wednesday, because a lot of the talent couldn’t make it to the arena. Eck showed up the next day, ready to do the interview, but says a public relations (PR) representative reminded him that the interview was scheduled for the previous day. Eck pleaded his case, because of the blizzard and eventually the PR person told him that he’d check with The Rock, to see if he was up for it. Luckily Eck got his wish. 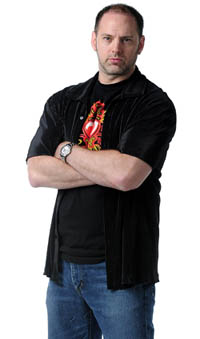 “I remember interviewing The Rock in the catering area and the PR rep was standing behind him, motioning to me to wrap it up,” he said. “The Rock told me not to worry about it and he said he wasn’t going anywhere until I was finished. He was so gracious and was just full of confidence, not arrogance.”

Eck says he always tries to be different from anybody else in the field and always has the utmost respect for anyone that he interviews. Not only is he a wrestling journalist, but Eck spent a brief period in the business itself. He used to write for WCW Magazine in the late ‘90s and he remembers an interview he did with Hulk Hogan, who had his own locker room at the time. Eck said he caught Hogan off-guard with a question he had never been asked before, after Hogan had just told him that there wasn’t a question Eck could ask, that he’s never answered.

“You have to go in prepared for any interview,” Eck said. “I usually read other interviews before I do mine and ask what nobody else has asked.”

Occasionally, journalists do have their dark days. Eck recalls an interview he did with Raven, that didn’t go as he had anticipated.

“I wanted to talk to Raven about his well-documented drug issues,” Eck said. “He was just really uninterested and was basically asleep during the whole interview, so I just had to wrap it up.”

Evan Ginzburg is the host of Legends Radio on 99.5 FM in New York City. He knows first hand that unlike print, radio interviews can be a bit uneasy at times, especially when they’re live.

Ginzburg’s show not only covers pro wrestling, but other genres of pop culture as well. That caused a lot of problems one night.

“We scheduled an improv group to come on the air with us the same night as some indy wrestlers,” Ginzburg said. “A lot of the indy guys didn’t care for the improv people, because they were known for doing some parodies of pro wrestlers in the past. There was this air of tension that night and I was getting uncomfortable, because I thought something was going to happen. Luckily, we eventually calmed everybody down.”

Ginzburg says when interviewing a pro wrestler on the air, the interviewer has to let them speak, because there’s only so much time on the show. Ginzburg adds that interviewers cannot stop someone from saying something controversial, but they should be prepared to cover it up afterwards.

“One time, we had Frankie Stars on our show and he made a politically incorrect comment about the Gulf war,” Ginzburg said. “We had to cover it up by saying the opinions of the guest were not shared or endorsed by the host.”

Ginzburg advises interviewers to not get involved in wars between promoters or wrestlers, because it takes up too much time on the air and it would probably be wasted time too.

“Interviewers should just avoid petty feuds,” Ginzburg said. “You shouldn’t ask a wrestler about his/her problems with this booker, because it’s just not good radio. I usually try to find human interest stories, because they tend to be more appealing.” 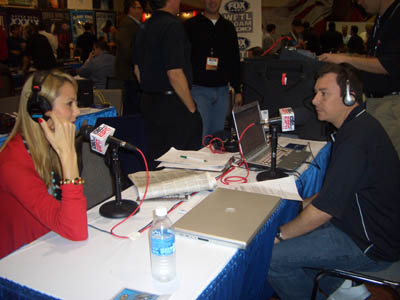 Stacy Keibler sits in with Brian Fritz on a recent Between The Ropes show.

Brian Fritz is one radio host who can’t say he’s had many problems with interviewing pro wrestlers.

Fritz is the host of Between The Ropes in Orlando and remembers a story from 1999, where he was attempting to contact Chris Jericho, right after he had departed WCW and was on his way to the WWE (WWF at the time). He had a bit of trouble getting a hold of Jericho, but one day, he was all set to do the show and out of the blue, Fritz got a phone call from a very surprising guest.

“I couldn’t believe my ears when my call screener was telling me that Jericho was on the line. He called us!” Fritz said. “It was a great interview too. It went about 40-45 minutes.”

Fritz says for an interview to be successful, the interviewer needs to be well prepared and have tremendous respect for a guest.

“When you’re a radio host, you have to make your guest feel comfortable,” he said. “It can’t be like putting them in a dark room with a bright light. Radio interviews have to be more conversational.”

The general consensus seems to be that most interviews with professional wrestlers are usually positive.

Michael Landsberg, host of Off The Record on TSN — Canada’s answer to ESPN — can certainly solidify that point.

Landsberg remembers a humourous incident where he had “Stone Cold” Steve Austin on the show and Austin was supposed to rip Landsberg’s shirt off at the end of the interview. He says Austin apparently forgot about it and Landsberg had to remind him while they were on the air.

Landsberg is known to ask the tough questions and never hesitates to approach a controversial subject. 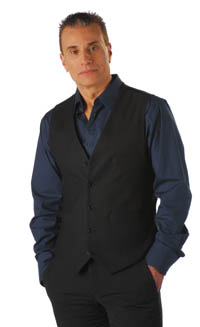 Michael Landsberg, host of TSN’s Off The Record.

“Vince McMahon was my number one guest on Off The Record and I got him to admit that he lied to Bret Hart, going into the Survivor Series in Montreal,” Landsberg said.

Another one of Landsberg’s most memorable guests was The Undertaker. He says Mark Calloway was such a genuine guy and he never made him feel uncomfortable.

“Most guys are really happy to come on my show and share their own stories,” Landsberg said. “I’ve noticed that there’s a dramatic increase in ratings whenever we have a wrestler on the show. The ratings almost double.”

Surprisingly, one of the few times that Landsberg has had a problem with a guest is when he had two fellow Toronto natives on the show.

“I had Edge and Christian [Cage] on one time and I was talking about the steroid issue,” Landsberg said. “I looked at Christian and asked him if he had ever felt pressure to take steroids, being a smaller guy and he kind of just paused for a good five seconds and said he was happy being the size he was. So I asked Edge if he had ever taken steroids and he openly admitted it.”

Landsberg said that after that interview, he got a call from WWE Canada President Carl DeMarco, who told him that he wasn’t allowing any of the guys to appear on his show again, because DeMarco felt that Landsberg ambushed Edge and Christian with the steroids question. Landsberg said he never put any pressure on them. Eventually the situation was forgotten and Landsberg was able to continue booking WWE talent on his show.

Landsberg says his experience interviewing pro wrestlers has been pleasurable for the most part and he finds that they are the most honest and professional guests he’s ever had.

“Vince McMahon understands better than anyone else that these guys coming on my show and getting this publicity is good for business,” Landsberg said. “Journalists have to respect what they do and treat them as athletes, not actors.”