Coach Kurt an innovator before his time

Long before the Internet was as prevalent as it is today, the wrestling community in the Windsor-Detroit area depended on Coach Kurt and his wrestling hotline. 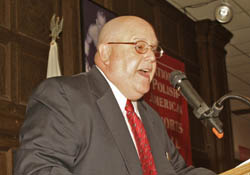 Coach Kurt (real name Kurt Schneider) was the innovator of a pay-per-call hotline that fans could call several times a week and get the inside scoop on the WWF and NWA promotions and local events. The hotline was also updated during pay-per-view shows with sound bytes from the actual events.

But ask him about his career and accomplishments and the humble Schneider is reluctant to talk about himself.

“What I did was more or less a PR piece for the WWF where I would do interviews at TV tapings, record the wrestler’s promos and take fan questions,” Schneider said. “Then in 1985, we expanded our info source and would have arena results on our 976/900 hotline. We (Phone Programs of Michigan, Inc.) were the first ones to do that. The WWF wouldn’t publicize their house shows heavily and they didn’t want those results known. For WrestleMania III, we did play-by-play over the phone and even then, something like that was still in its infancy.” 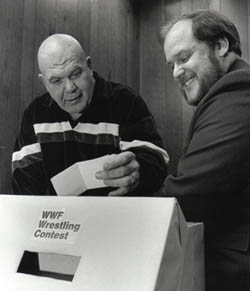 George “The Animal” Steele and “Coach” Kurt draw for a WWF prize.

Schneider worked with names such as “Mean” Gene Okerlund, Bruno Sammartino, David Faragnoli and Captain Lou Albano on the hotline that wound up in the New York and Chicago markets, along with Detroit, and covered WWF, NWA/WCW, but not independent promotions.

Schneider, a 56-year-old Detroit native, also penned a weekly pro wrestling article (first on Wednesdays, later on Sundays) in the Royal Oak, Mich.-based Daily Tribune. It was while he was writing for the paper that he started to make an impact and bring the world of pro wrestling to everyday people and not just wrestling fans. He wrote the column from 1985 until mid-1993 and each week would rank the top tag teams and top singles wrestlers in a list he called the Dominant Dozen Dudes.

“To this day, I still believe that Kurt’s pro wrestling column in the Tribune was the first of its kind in any daily newspaper in the country,” said former Tribune sports editor Steve Stein. “I also believe that Kurt’s pro wrestling telephone hotline was a first. Kurt’s wrestling hotline was far ahead of its time. I remember calling it to get the results of matches from around the country.” 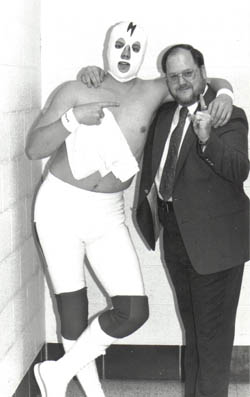 “Coach” Kurt poses with his protege White Lightning in 1990.

“We worked together on a variety of levels,” Evans remembered. “Kurt was with Sports Phone back then and we would see each other frequently at professional sporting events like Tigers, Pistons, Lions and Red Wings games. He also wrote his famous weekly pro wrestling column for us and that added to his legend. I was asked frequently by readers if I knew Coach Kurt. When I answered ‘yes,’ they would be in awe. They would also have a question or two that they wanted the Coach to answer.”

Away from the phone and typewriter, Schneider, a placekicker on the Wayne State University freshman football team in 1969, was a heel manager in Motor City Wrestling, a small-time promotion that he owned and had shows in the Detroit area and occasionally across the border and in Ohio. Kurt wore many hats for MCW, including promoter, commentator and sometimes grappler when he was known as The Hun. That moniker was earned during the 1970s at Lou Klein’s gym in Detroit, when he would occasionally appear as a ring announcer and a wrestler with a German gimmick, but “mostly just get beat up,” Coach Kurt admitted.

During the MCW run, Schneider worked as a broadcaster and interviewer with a boyish-looking Al Snow, “Iron” Mike Anthony, “Irish” Mickey Doyle, “Spartan” Greg Bobchick, a young Sabu, and Man Mountain Lancaster, among others. Memorable events from this time include one on May 30, 1992, in the Detroit suburb of Fraser, where “Punisher” Rock Stevens and Doyle battled in a Falls Count Anywhere match that saw the use of a Zamboni and getting 7,000 fans to the Ladbroke DRC race track for a show on July 4, 1993 when Stevens unified the MCW Heavyweight and TV titles versus Doyle. 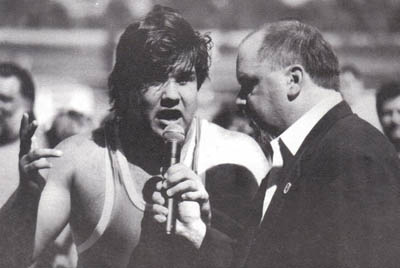 Scott D’Amore (with hair!) cuts a promo as Coach Kurt holds the microphone.

“Kurt was a bit of a different breed,” D’Amore said. “A lot of the guys didn’t really care for him as he always tried to make his promotion seem like a bigger deal than it was. But isn’t that what the business is all about? He used some guys that were not really very good in the ring, but they were loyal to him. Kurt was also somebody that tried to make sure he pushed characters when everybody else was just pushing action. He was a very good announcer as well. He could do backstage interviews or be a lead announcer on play-by-play. 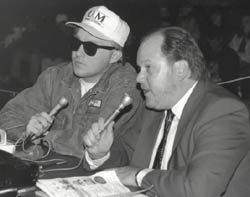 “The hotline was a way to find out things they wouldn’t tell you about on TV and you could find out results almost as they happened,” D’Amore continued. “Kurt was a good guy that loved the wrestling business, sports and hanging with the boys. I run across him once in awhile at a ball game or something and it’s always a pleasure to talk old times with him.”

Evans went on to say that Kurt’s hotline and column added something to the wrestling business that, sadly, is now deep in the past. But in 1988, it was almost larger than life.

“The hotline offered an immediacy that was unmatched in those days,” Evans said. “Sports Phone filled an invaluable niche during its time. Unfortunately, evolving technology made it past tense. His column provided our readers with an insight that few other newspapers offered at the time. Kurt was very knowledgeable in all areas of professional wrestling, but he had a special expertise with wrestling in Michigan and throughout the Midwest. We received constant positive feedback on Coach Kurt’s wrestling column. Kurt was extremely passionate, especially when it came to wrestling. He loved the sport and appreciated the skill and athleticism of the wrestlers.”

The masthead from the newsletter, Coach Kurt’s Wrestling Line in August 1994.

In the column, Kurt also predicted pay-per-view match results and was usually bang-on correct. He covered WrestleMania III with Stein, who said that they would have a pool going for pay-per-view shows and Kurt always won because “I think he had inside information the rest of us didn’t have.”

Kurt and his wife, Christine, have been married for 36 years and have three adult children and recently welcomed their first grandchild.

Still, most fans today are spoiled by the World Wide Web and mention of a hotline seems to draw a chuckle from some people. Coach Kurt was definitely an innovator in this realm. Evans summed up Schneider’s personality to show his true character as a sports enthusiast and more importantly, a father. 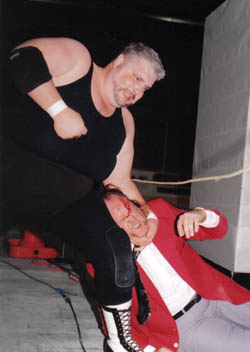 “There is not just one thing I remember, but an amalgam,” Evans noted. “I remember his passion in terms of wrestling. I remember being in awe of his knowledge of sports, whether we were in Tiger Stadium during the ’84 World Series or at ringside at Joe Louis Arena. I remember being impressed by Kurt as a father in the stands at Bishop Foley (high school in Madison Heights, Mich.). He was an ardent supporter of his son, but he also kept high school sports in their proper perspective.”

As general manager of Phone Programs of Michigan, Inc. from 1985-99 and GM/owner of MCW from 1997-present, Schneider has been responsible for all business functions of these two communications companies. Budget, payroll, personnel, human resources, media and customer relations, sales and format all are under his umbrella of duties. His tasks have also included the complete design and construction supervision of two broadcast studios and communications hub centers in Southfield, Mich., for PPI and a similar installation in Warren, Mich., for MCW.

Schneider is a former member of the Detroit Sports Broadcasters Association and was the first three-time president of the DSBA, being elected to two one-year terms from 1981-83, an emergency tenure in 1995 and another pair of one-year terms in 2004-05. Schneider is the only person to serve the organization as president, chairman, vice president and treasurer. 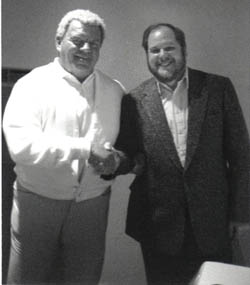 Dick the Bruiser and “Coach” Kurt at a mid-’80s Detroit Press Club meeting.

He has worked for 11 different Detroit radio and television stations, including WJR and WWJ, and all of the major national radio networks. He has also written for numerous sports publications including Red Wing and Gold Belt magazines, the Tribune and USA Today’s Sports Weekly. For the past seven years he’s been the voice of the New York Knicks fan hotline, a service patterned after the Detroit Tigers and Detroit Pistons phone services he pioneered in the Motor City.

All that aside, Schneider still keeps abreast of the wrestling scene and offered his opinions on the state of the industry.

“The WWE has no opposition; it’s free enterprise,” he said. “There is no niche in wrestling any more, no territories. Ring Of Honor is trying to hang in there and TNA doesn’t do live TV. If you don’t do live TV, everyone can find out the results ahead of time and then not be surprised.”

“I miss Kurt and his Coach Kurt’s column and I am sure the readers do, too,” added Stein.

Coach Kurt – a pioneer indeed. Just a decade or so ahead of his time.

Matt Mackinder was once a paper carrier for the Daily Tribune and read Coach Kurt’s columns religiously, even if it meant some customers didn’t get their paper until nightfall. E