This Sunday, TNA Wrestling makes its debut in Windsor, Ontario, and Jeff Jarrett couldn’t be happier. SLAM! Wrestling got the chance to talk to the TNA founder earlier this week.

“I’m looking forward to the show, without a doubt,” he said. “I’ve always had good memories about Canadian fans, going back as far as (the days teaming with) Owen Hart. You guys are so knowledgeable about what we do, so passionate.” 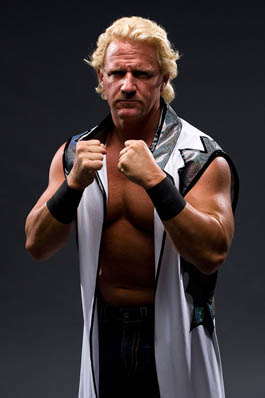 TNA has always seen Canada as a valuable market, and Jarrett said that he hopes the Windsor show is the first step in furthering the company’s presence here.

“Canada’s still very important,” he stressed. “It’s great any time we can cross the border. In fact, we’re actually in discussion with some promoters in western Canada to tour those provinces. We’re looking for some windows to have several shows in Canada in 2011.”

The company expanded its live event schedule this past year, and Jarrett sees this as a definitive positive in terms of promoting the brand by offering a uniquely fan-friendly experience.

“Well, you can use that term,” Jarrett offered, “but I say we’re not just fan friendly, but rather that we’re the most fan interactive wrestling experience, and for that matter, entertainment experience.”

Describing the shows, he noted that “we’re signing autographs and taking pictures literally from the time the doors open. We’ll have different stars out there at the table as people come in. During intermission, we have a TNA Knockout out there taking pictures. After the show, we have a big autograph party with many different stars. We give the opportunity for everyone in the building to get into the ring and take a picture with one of the TNA stars. Throughout the night, we find the loudest, rowdiest fans and hand them a backstage pass, and they get to come back for a meet and greet during the intermission. Through radio promotions and contests, people can become a guest manager or guest announcer. We pride ourselves on being fan interactive. People sometimes ask, ‘Do you really do this at every live event?’ — and the answer is yes.”

Beyond the live events, Jarrett is also happy with the company’s overall direction and growth. The year 2010 has been one of many changes, with Eric Bischoff and Hulk Hogan entering as major players, and major changes to the roster, which has seen an influx of new and returning players, like Jeff Hardy, EV2, and Mr. Anderson, among others. Some critics, notably within the internet wrestling community, haven’t embraced these changes whole-heartedly, and in fact have been quite vocal about not liking the direction to which company is heading. For his part, Jarrett is non-plussed by the nay-sayers.

“It doesn’t bother me,” he said, adding that “you have to take the good with the bad (when it comes to comments from fans). Their comments are actually a true testament to the passion of, not just TNA fans, but fans of all wrestling. That’s what makes this business so unique. That level of passion has been there always, from when all the networks carried wrestling in the ’60s to when it was on the regional networks in the ’70s and ’80s, and now on cable and the internet and pay-per-view.” 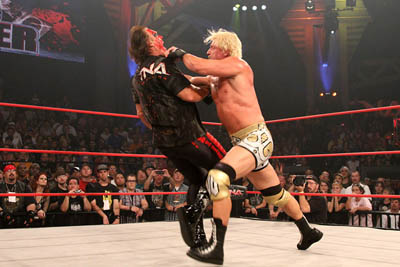 Jeff Jarrett drives a bat into Sting at No Surrender earlier this month.

For his part, Jarrett is completely happy with where the company is, and where it’s heading.

“What we’ve been able to do in the past eight-plus years, I’m very happy. The international presence — I just got off the phone talking about our upcoming tour in January of England, Scotland, Ireland, Germany and France — the Jakks Pacific action figures, our live events,” he listed. “We’ve added additional program, we now have Reaction, which follows Impact every week. The relationship with our partner Spike TV is stronger and more lucrative than ever. Are we batting a thousand? No. But I don’t know any business that’s done that. Would I like it to be bigger and better? Absolutely. But as for where we are right now? I couldn’t be happier.”

It’s that happiness that keeps Jarrett driven to not only promote the brand all around the world, but to do the same while still maintaining a spot on the active roster. A veteran of the business, having started in his teens, Jarrett still enjoys lacing up the boots, as he will at the company’s next pay-per-view, Bound for Glory on October 10th.

That show is like our Stanley Cup — I’ll use a hockey reference because this is for Canadian media, as opposed to saying that it’s our Super Bowl,” he laughed. “It’s the culmination of our year’s work. But also, to look at it from a promoter’s mentality, we also look at it as the starting point for our next year. Everybody brings up their A-game. There’s so much that goes in to that night.”

Jarrett is scheduled to wrestle on that show, and is also slated for action in Windsor tomorrow night — a town where he beat Raven for the NWA World title at a Border City Wrestling event in 2005. As of now, Jarrett has no plans on retiring, at least not any time soon.

“The passion that I have for the business, in and out of the ring, is as strong as it’s ever been. I think I have a strong gift to teach different guys different things. I re-evaluate every year, see how my body feels, see how my mind feels, and figure it out at that time. I’ll know when it’s time, but right now, I’m still happy doing it.”