CHARLOTTE – North Carolina-based manager and promoter “Count Grog” is on the scene in Charlotte at the NWA Wrestling Legends Fan Fest, and will be keeping SLAM! Wrestling readers abreast of what he sees and hears all weekend. He filed his first report late Thursday night. 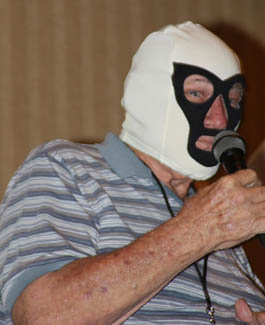 The first day of NWA Fan Fest is like the first day of school, the kids a lot older and the teachers (old NWA wrestlers) a little slower than before. Everyone is scurrying trying to register, set up their merchandise booths or make acquaintances with old friends or foes from years gone by. The bar scene is not quite in full session and if there are any single women they best stay away from the University Hilton bar. There are maybe 400 or more wrestling fans in early who waited patiently in line to register to get a glimpse of their hero’s from days gone by. Most are main eventers, and some are lesser known — but, as Les Thatcher tells us during the Mr. Wrestling II Q&A, they drew money. And from the looks of the first night crowd so did the NWA Fan Fest.

6:31 AM- Dogs barking wake me up, I’m off today and not leaving for Charlotte until noon; this is not the start I wanted. Dionne going into work late so I have to get the dogs.

9:00 AM- Finish printing out some photos I may want signed, including me and Mr. Wrestling II, Harley Race and Danny Hodge.

11:20 AM- cleaned house, killed and pulled weeds and heading to shower. Wes, my roomie this weekend, forgot his credit card so I need to put it on my card, in meantime they make him pay cash.

12:00 PM- realize I left laptop on kitchen counter so I need to turn around and head back.

3:25PM- pull into Hilton parking lot in Charlotte. Greeted by former WCW star the Maestro (now the Stro). At check-in they at least have a key for me, but have to wait to get into my room.

4PM- checked in room run into Tre and Sash Walker from the Ring Wars Carolinas promotion. Go to registration to pick up wrist band. Long wait but get it and run into ref Morgan Dollar now of Cauliflower Alley Club fame. Go up to bar and Jimmy Valiant comes in and wants to get a photo with me and his wife Angel. Run into “The Encyclopedia” Jim Ryan and talk old school rasslin. Along the way Dick Bourne of Mid Atlantic Gateway stops by and Ivan Koloff as well.

6:00PM- go to check out JR’s BBQ chat but they are just starting to serve food and stop and say hi to Les Thatcher who is dining with Johnny Walker and Harley Race. Decide to go have sushi next door instead. Sushi 101 rocked.

7:00PM- go to the Mr. Wrestling II Q&A with Les Thatcher as host. Well, at first not admitted because security doesn’t know about orange wrist bands, finally Greg Price gives the word to let me in. Wrestling II has a few funny tales involving Lillian Carter (President Carter’s mom) and how female fans used to ask his wife what he looked like. He later gets very emotional in talking about his old partner Tim Woods who has passed away. Wrestling II mostly keeps the Q&A kayfabed. Danny Hodge is in the crowd so maybe afraid of getting stretched by Hodge if he breaks kayfabe.

8:00PM- head up to bar and hang with indy workers like Robert Royal, Neil Sharkey and Chris Escobar. Jim Ryan returns. Looks like Jim Ross headed down finally for his Q&A at the BBQ. Time flies quickly. 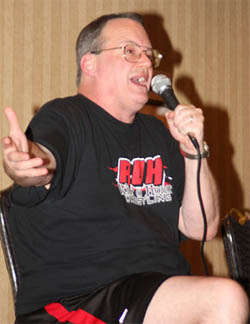 9:50PM- head down for Jim Cornette’s Q&A. Cornette starts early. As expected with Tommy Young as his microphone man in the crowd. Lots of jokes aimed at Young to start. First question involves Batista and his claim he learned nothing in Ohio Valley. Usual Cornette tirade on this but still said he had a look that WWE wanted. Mike Mooneyham hanging with me along the back wall, meet SLAM! Wrestling photographer Christine Coons.

10:30PM- Cornette doing a good job to steer clear of the same old stories but goes on about TNA, Terry Taylor and Vince Russo. The crowd keeps those questions coming. A lot of questions about ROH and Cornette really lights up when talking about his current employer.

10:50PM- getting tired better head to room to write this up, Cornette entertaining as usual but clock is ticking.

11:47PM- it takes 47 minutes to get hotel wireless to work! Still faring better than Wes who is stuck at airport doing pickups but all flights delayed because of storms. Better close out as I have an early day ahead of me.