Charlotte Day 4: A day for goodbyes

CHARLOTTE – The fourth and final day of the NWA Fanfest was a time to say goodbye. Old friends hugged and said their goodbyes. The vendors cut prices and worked deals to say goodbye to merchandise they didn’t want to take back home. That wedding party also staying at the hotel said goodbye to wrestling fans they probably didn’t think would be surrounding their wedding reception. Before it would close up there would be more NWA superstars signing autographs and more matches to be held at the hotel. But there was at least one really happy reunion today. 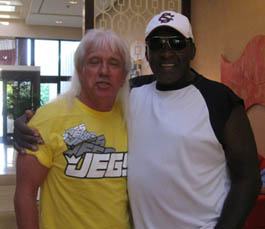 6:38 AM- Wes Weger is up early to take Terry Funk to the airport. He wakes me up getting ready and a fear of Terry Funk coming back to my room to wake me on his own gets me up and moving.

7:30 AM- While contemplating the Hilton’s breakfast, Wes returns and we head to Shoney’s one last time. Bacon and biscuits is the perfect foods to discuss the long weekend.

8:30 AM- Wander around the hall but Fanfest isn’t open yet. Back to the lobby where I run into Sonny King and chat for a minute as he waits on his daughter to take him to Shoney’s. We spot Ricky Morton coming in and greet him and he is surprised to see his old friend and mentor Sonny King. This is a happy reunion and very emotional for these two legends.

9:09 AM- Wander down to the main vendor room and pick up my Paul Bearer autographed photo I took with him yesterday. Rene Goulet and Traci Brooks set up in vending booths as does Ricky Morton. An unmasked Mr. Wrestling II, Johnny Walker, sits in front of the second vendor room talking to fans.

9:30 AM- The Hollywood Blondes — Buddy Roberts and Jerry Brown — with Sir Oliver Humperdink set up in the second room to take photos and sign autographs. I have to get a photo with these guys. Say my final good byes to Sir Oliver, who is one of my favorite people in the business. Catch Les Thatcher before he heads to the autograph room for today’s final signing.

10:00 AM- Buy a book on Incredibly Strange Wrestling and a couple ROH DVDs from Highspots. Get a few Mid Atlantic DVDs cheap from Sam’s Slobber Knockers booth. His stuff is priced to move today.

10:30 AM- Load the car with my luggage and make a final approach to the vending rooms. Rene Goulet and the other vendor guests are learning it’s a slow Sunday morning with people leaving early, not coming down to the Fan Fest early or off eating breakfast or brunch. Items are priced to sale and no reasonable offer seems to be ignored. The autograph line in the other room starts to form and fans are hoping to catch their heroes one last time. 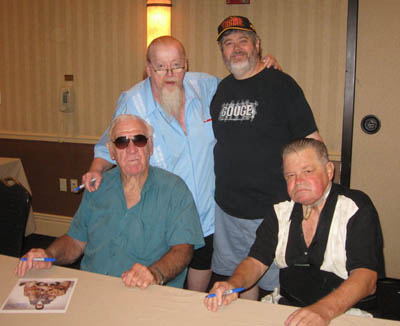 11:00 AM- Stand around saying goodbye to Pete Lederberg and Jeff Bowdren. A couple of fans from around the Butner, NC area get a photo with me and tell me I am their Jim Crockett; I am humbled and honored for the remarks. Talking with a group of people I am told on Friday Sting scared a adult woman who had a clown phobia and she ran screaming down the hall when she saw him in his makeup. When he tried to hug and console her it made it worse I am told. Compare some notes and memories of the weekend with SLAM! Wrestling photographer Christine.

11:30AM- Make my final pass through and go up to meet Sonny King, who is saying goodbye to his daughter before we leave for the airport. Sonny shares his memories of the weekend — his first involving the wrestling business in a long time. Offers to come up to help me out with my promotion GOUGE in the future. Drop off Sonny at the airport and head back home.

2:00 PM- Talk to Lou Marconi on phone about the matches last night. He is chasing NWA World Champion Adam Pearce for a title shot (Lou is the NWA East Three Rivers Champ) and wants to know all about the main event last night. Lou wanted to make an appearance and confront Adam Pearce at Fan Fest but decided against it as it not being the best venue to accomplish anything positive.

3:00 PM- Get a call from Wes that Mr. Wrestling II was taken off in an ambulance with what was rumored as a heart attack. Hope Johnny Walker recovers as he was nothing short of a great gentleman all weekend.