Although no longer in the running for WWE titles, Bryan Danielson has his sights set on another prestigious and sought out piece of gold — the NWA World Heavyweight Championship. 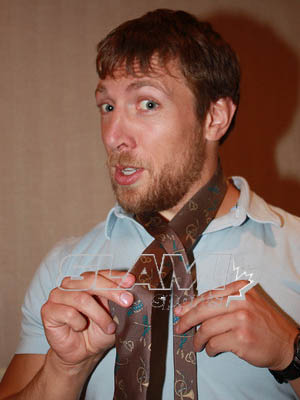 Bryan Danielson demonstrates how to tie a tie at K&S WrestleFest in Carteret, NJ, in July. Photo by Christine Coons

Touted as the hottest free agent in wrestling, Danielson will be on hand at the NWA Wrestling Legends Fanfest Weekend August 5-8 to meet fans and challenge current NWA titleholder “Scrap Iron” Adam Pearce.

“At one point it was the title in the world. But as far as titles that aren’t on any national television, it’s one of the most prestigious titles out there — it still holds weight in Japan, and so in that regard, it’s still very prestigious,” Danielson told SLAM! Wrestling at the K&S WrestleFest in Carteret, New Jersey. “There’s still a lot of members of the NWA, where the NWA Champion can go around and defend the title.”

This isn’t the first meeting between Danielson and Pearce, and Pearce looks forward to their upcoming match.

“I’ve been fortunate to have been in a position to work with Bryan Danielson in a variety of ways over the years,” Pearce said. “I’ve always felt we had a natural chemistry in the ring — in both ROH and NWA bouts — that made our matches fun to watch, whether they were two minutes or 22 minutes. I expect more of the same at the NWA Legends Fanfest on August 7th in Charlotte.”

Danielson has also previously had a shot at the belt, but he noted that in 2007, a detached retina forced him to drop out of the championship tournament. Ironically, Danielson beat Pearce in the semi-finals, but when he was forced to withdraw, Pearce took his place in the finals and ended up winning the match and the title in San Juan, Puerto Rico. If Danielson can get the win this time, it could prove to be a boon for both himself and the NWA, Danielson believed.

“I think there would be a huge opportunity there for the NWA, given the nature of my release [from the WWE] and how much popularity I have right now. If I was the champion I think it would be good for the organization. And if I win the title, I’ll definitely defend it anytime they want me to,” he said.

Promoter Greg Price said that even with so much attention surrounding Danielson, he’ll be following a tough act as last year’s event featured the reunion of the Four Horsemen.

This is the ninth Fanfest weekend, and will be held Thursday, Friday, Saturday and Sunday, (August 5-8), at the Hilton University Place Hotel in Charlotte, North Carolina.

“The American Dragon” will be signing autographs and taking photos with fans from 4-6 p.m. Saturday, August 7 and from 10 a.m.-noon Sunday, August 8.

— with files from Christine Coons