Jeep Swenson, an internationally known bodybuilder and pro-wrestler who played a mutant villain in Batman & Robin, died at Los Angeles’ UCLA Medical Center of heart failure on Aug. 18. He was 40. 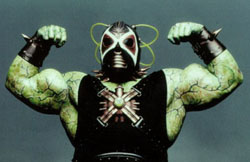 The 6-foot, 400-pound Swenson appeared in the film as Bane, the masked sidekick of Poison Ivy, played by Uma Thurman.

Swenson was known in his professional wrestling days as “Jeep the Mercenary” and was featured in fitness magazines and television commercials.

He appeared in several other films and had some TV roles as well.