Maury High, who died Monday, capitalized on his resemblance to the legendary Sputnik Monroe to form a championship “brother” tag team, winning belts in in Florida, Georgia, and Mississippi in 1967 and 1968. 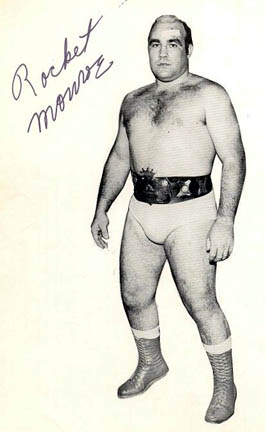 The more established Sputnik (Roscoe Monroe Brumbaugh) was 13 years older than High, who worked as the second Rocket Monroe, following Bill Fletcher in 1960.

Sputnik said he used a little bit of his aura to help boost the team to prominence. “Maury High is about as colorful as a cigarette butt,” Sputnik joked in The Pro Wrestling Hall of Fame: The Tag Teams. “He was not very colorful. But we did OK together.”

In an interview with Rich Tate of Georgia Wrestling History, High talked about Sputnik as a partner. “He was a great worker, and a good guy when he was sober,” he said. “When he was drinking it was a different story. I got tired of being around him because he got to where he was always drinking, so I left and went out on my own. It also made me mad that (manager) Saul (Weingeroff) would sit around and do nothing and draw the same money I was getting for working my butt off. I had made enough of a name for myself by then that I knew I could do it without them. It wasn’t too long before I started working with Gene Dundee — he was Flash Monroe.”

As Sputnik went his own way, and battled the bottle, High formed another Monroe tag team.

Gulf Coast promoter Rocky McGuire brought in Gene Dundee (Gene Sanizzaro), who been in the Memphis territory, to work as Flash Monroe. Rocket and Flash were together the longest of any Monroe pairing, working as a team on and off through the mid-1970s, for about 11 years together. Their biggest run came in the Gulf Coast in 1968 and 1969 against Ken Lucas and Don Carson.

“I loved Flash. I used to pick at him and rib him and make him mad, but he’d always come back laughing,” High said in an old interview.

In 1971, Sputnik and Rocket reunited and introduced Norvell Austin, a young black wrestler, as someone they’d raised, complete with the trademark white streak in his Afro.

He was born in Memphis, Tennessee in 1941. As a youth, High was into football, playing fullback on the Somerville (Tennessee) High School team. A knee injury in his final season derailed a scholarship offer from Memphis State.

“When I got out of high school, I was rabbit hunting with Johnny Alexander. He was wrestling for promoter Jim Holly, who was running shows in opposition to Nick (Gulas of Nashville),” High recalled for the Whatever Happened To … newsletter in 1993. “He invited me to join him and some others for a workout that night. They had a ring set up in a suburb of Memphis. Johnny, Billy Wicks and Jimbo Stewart beat me like a yard dog. I crawled out of bed that next morning and decided that wrestling wasn’t for me.

“Then I decided they weren’t going to make me quit that easy. The next night, they whipped me that much more. On Tuesday morning, I quit again. But I ended up going back for more. After a week of that kind of punishment, they lightened up. On Friday, I got hot and asked why they had beat me so bad and then lightened up. They said they wanted to be sure that I would take it.”

His first wrestling name was Rocky Montez, and his debut match was November 12, 1960, in Marktree, Arkansas, against Big Jim Holly (who was indeed big at 420 pounds). The following week, he was Arkansas State champion, having beaten Joe Deaton.

For the next few years, High just wrestled part-time. But then his big break came when referee Speedy Hatfield suggested that his likeness to Sputnik Monroe could be a career-changer.

Rev. Danny Goddard was the president of the Sputnik Monroe Fan Club, and later a photographer for Georgia Championship Wrestling and a referee. Now a pastor in Indiana, he shared a some of his memories of High, which will be read at the memorial service:

Although I knew his real name, he was always “Rocket Monroe” to me. We met in the late ‘60s, when I was president of the Sputnik Monroe Fan Club. One summer, my Dad took me from Atlanta to Tampa, Florida to visit Sputnik. I climbed into a station wagon with Sputnik and Rocket Monroe, Saul Weingeroff, and Bill Dromo, and we went on two roadtrips: Eau Gallie on Wednesday night and Jacksonville on Thursday. Never will I forget how we were pelted with Coke bottles by irate fans as we tore out of the Jacksonville Coliseum parking lot. Rocket Monroe was driving the getaway car!

After making a stop down the highway, Rocket asked me to hold something for him. He laid two heavy gold World Tag team Championship belts in my lap and I slept under those belts all the way back to Tampa, quite a stir for a 13-year old boy!

During my high school years, Rocket and Flash Monroe were working on the Gulf Coast. Several times, I drove to Dothan, Alabama to see Rocket wrestle on Friday nights. He always took me out to a restaurant after the matches, and then I would drive all night back to Atlanta.

After high school I became the photographer for Georgia Championship Wrestling and Rocket soon came to Georgia. I visited his family many times at their apartment, I believe near Cleveland Avenue, and I either rode with him or drove him to a few shows here and there. In 1976, I went to Nashville to attend college to study for the ministry, and Rocket called one day, needing a place to stay while working Nashville TV. My roommate happened to be gone for the weekend, so Rocket moved in for the night. He left the next morning, and within minutes, three college students knocked at my door. They thought they had seen the wrestler, Rocket Monroe, come out of my dorm room. Not wanting to lie, I just answered, “Now think about it, guys. What would Rocket Monroe be doing in my room?” That seemed to satisfy.

High retired from wrestling full time around 1979, though he had a final match in 1990 in Riverdale, GA.

After wrestling, High was the assistant Public Works director for the city of Riverdale, and then a building inspector for Clayton County, GA. He retired in 2004.

Last week, Rocket Monroe was hospitalized with a kidney infection, and doctors found a blood infection. He came home on Saturday night, seemingly okay, but he passed away Monday morning in an Atlanta hospital.

Goddard managed to call his old friend about six weeks ago. “I called him because I had heard that he had just gone through, I believe a hip replacement. He had also had a knee or two replaced over the years,” recalled Goddard. “We had a great time talking and catching up.”

There will be a memorial service on Wednesday, June 9th at 11:00 a.m. at Friendship Baptish Church, 687 Gaskill St. E., Atlanta, presided over by longtime friend and wrestling referee Bobby Simmons.