TigerFest debuts this weekend in Milton 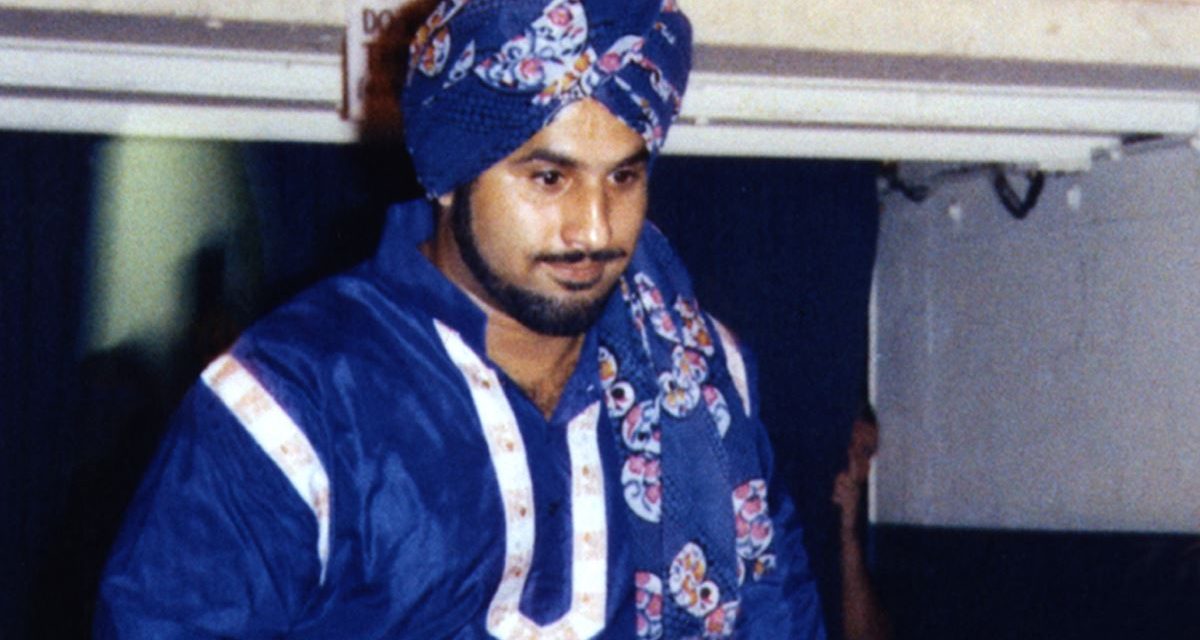 With a new Milton, Ontario public school named after him opening this fall, Tiger Jeet Singh is out preaching his message: “Stay in school, say no to drugs, stay Tiger-fit.”

“That’s the three things I’m saying, I’m preaching all over. I can’t go everywhere, but the demand is so strong we are getting invitations to schools, temples,” the 65-year-old Singh said.

By now, the story Jagit Singh Hans, who came to Canada from India with nothing, became an internationally-famous wrestler, and then an important land developer and philanthropist in his adopted country is well known, thanks in part to a widely-aired documentary, Tiger! 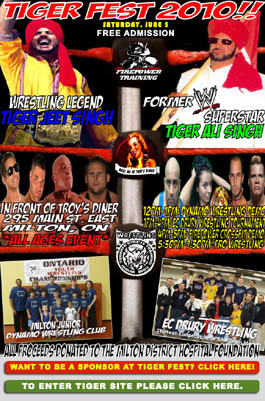 To celebrate the school and other blessings, Singh is teaming with his son, former WWE star Tiger Ali Singh, and Squared Circle Training, to promote an all-day wrestling event, TigerFest 2010, as a part of the Downtown Milton Street Festival on Saturday, June 5th. The community’s top amateur high school grapplers will compete during the day, followed a free pro wrestling show at 5 p.m., featuring Sonjay Dutt, Robbie MacAllister of the Highlanders, Greg Valentine, and Steve Corino. Proceeds will go to the Milton District Hospital Foundation. (More info at tigerjeetsingh.com.)

Sidelined by concussion issues in 2001, Tiger Ali, 37, has only competed in a handful of bouts in Japan since. He will be strapping on the boots for a hometown crowd.

“We thought, you know what, we have that celebrity, let’s use it for drawing in the people from outside of Milton, from all southern Ontario,” said Tiger Ali Singh. “From what we’ve heard, we have people traveling in, flying in, because this will be the first time I think I’ve fought since the formerly-known SkyDome with WWE in the late ’90s.”

If it seems like the Singhs have come out of seclusion, that is because they have. Tiger Ali’s concussion, suffered in Puerto Rico while employed by WWE, was his third in nine months. It resulted in a long struggle back and a lot of resentment — and a lawsuit — against the wrestling company.

“Forget about wrestling, I was just trying to get my life back health-wise. It took about three years, and then when I finally did, during that three years, I was just mellowing in sorrow, getting depressed,” Tiger Ali admitted. “I was very, very fortunate to have a loving family, parents, great friends, support group, that during that time of healing health-wise, I also moved on with my life and went back into the family foundation of what business was, which was land development and real estate.

“By the time my health came around, I was so engrossed in it, that I really didn’t have any time to look at pro wrestling.”

At least in North America. The Singhs attempted to lead a tour of India, that fell apart at the last minute with all the wrestlers already in the country. Protecting the image of Tiger Jeet Singh was important once the backers of the tour bailed, said Tiger Ali. “In India, we couldn’t compromise. That’s why we took the bulls by the horn when some of the promoters left, and Dad held a press conference, we sat with all the proper authorities and we made sure, out of pocket, that we paid each and every talent guarantees, even though the promoters had left.

“Reputation is everything, what goes around comes around, we wanted to make sure if were coming back to do events again, that none of the talent would be apprehensive.”

In mid-May, the Singhs went to their first fan fest, in New Jersey and were overwhelmed.

“We weren’t expecting anybody to want our autographs. The reason? I never wrestled in the States, and Junior, he’d been out of the business for so many years. People forget. But it was unbelievable,” said Tiger Jeet. “The crowd was amazing, and the people, all the old memories, and especially my old, old buddies.”

One of those friends was Nikolai Volkoff. “He closed his booth. He was selling pictures,” recalled Tiger Jeet. “He came and gave me a big hug. ‘Tiger, tell me something, is that your second life? Shit, you look so young!’ Then I told him, ‘Human beings never get old. The only reason you get old is if you have some stress or problem. God is great, we are fine and we are happy.'” 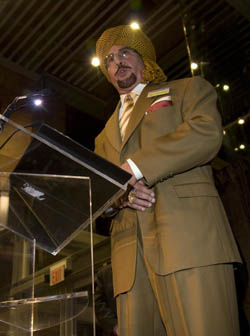 Tiger Jeet Singh speaks at the unveiling of the Milton Walk of Fame.

Giving back has always been important to the Singhs, and TigerFest is their second fundraising effort alongside Troy Newton, who Tiger Ali met more than a decade ago through Owen Hart. Though they were all from Milton, they never kept in touch.

“That bug hit us at that time,” said Tiger Ali. “We’ve always been there, dad and I, whenever a charity called.”

“They ask, ‘How much your net worth?’ I say, ‘Enough,'” he said. “I’m living very simple. I like to do a lot of charity work, like helping children. And God is great, he give us his blessing, like I never expected in my life.”