It can be a difficult thing to get an audience to cheer for a murderer, but Damage makes sure that everything is in place for us to consider Austin’s character John Brickner, if not a hero, at least admirable. 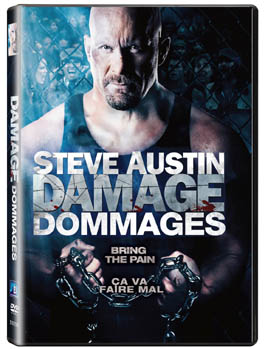 We meet Brickner as he is receiving parole from prison four and a half years into a seven-year internment for second-degree manslaughter. He embarks on the process of building a life up for himself again, and indicates his desire to “get right with this situation” — a desire that will dictate the course of events throughout the film. He gets on a bus headed for Seattle (which, except for an insert shot of the Space Needle, is actually Vancouver), and gets his feet on the ground with a construction job.

The film takes a leisurely pace to get started, being sure to plant those seeds of sympathy for Brickner early: his construction foreman is a jerk, and Brickner steps in to stop the harassment of a barmaid, Frankie (Vandervoort). Brickner takes on a second job as a sort of “peacemaker” at the bar when patrons get out of hand, and it’s during one of his fight-management scuffles that Frankie’s friend Reno sees the potential for Brickner to make some big money in the underground fight scene.

Although he is hesitant to sign up, Brickner is soon convinced that he must make a go of the fighting as penitence towards the widow of the man he killed. She has been left with a daughter in need of a heart transplant, and she has no means of paying for it. She had actually conveyed her approval of Brickner’s early release to the prison, since she now demanded that he assist her in procuring the funds. Again, if you want to get behind a killer, it helps to give him a new cause — and fighting to save this girl’s life is what drives not only Brickner’s fists but also the audience’s support for the man.

While it’s easy to presume that a film like this is built primarily around the past exploits of someone like Austin, the retired wrestler is more like the outsider as the film taps into the very real exploits of underground fighters. With fighters being brought in to play the parts instead of beefy actors, and the use of actual Vancouver-based underground fighting locations, Austin admitted (in the “Making Of” featurette) that he has to learn how to work differently for effect than he did with his old in-ring efforts. 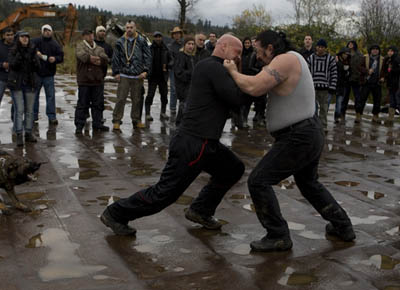 Further to that, Austin also spoke of most looking forward to the scenes without the scraps because it represented something even newer to him: Brickner is presented as a soft-spoken, humble, and compassionate man. Austin succeeds in delivering some subtlety in his performance that has never really been required of him in the past. In fact, those scenes eventually overpower the fighting scenes that unfortunately become repetitive, especially in the manner that Strickner takes the first few blows, looks to be out of it, then returns with a vengeance to win.

Being filmed in Canada means that you’ll see the usual Canadian contingent of actors: Vandervoort herself is from Toronto, as is William B. Davis (best known as “Cigarette Smoking Man” from The X-Files); and Winnipeg’s Donnelly Rhodes (TV’s Battlestar Galactica and Da Vinci’s Inquest), who plays cantankerous as well as anybody, also lands a nice role a pseudo-spiritual advisor for Brickner, as well as being the adjudicator for the matches.