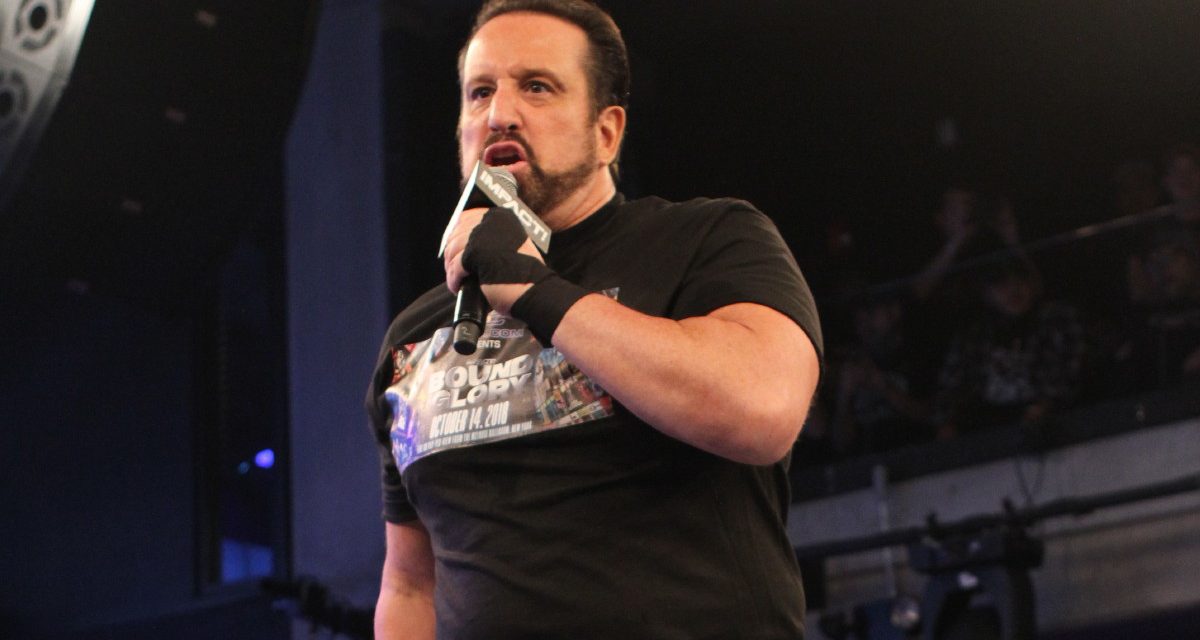 Ask Tommy Dreamer what he loves, and he’ll say his family and wrestling. Lucky for him, his schedule has been full of both since leaving WWE earlier this year. In Ontario this weekend for a three-day run with Maximum Pro Wrestling, Dreamer was happy to share his thoughts on both of his loves with SLAM! Wrestling.

“Things have been going really, really well,” he said in an exclusive phone interview earlier this week. “With all the shows I’ve been doing, my love for professional wrestling has continued.”

Dreamer has been taking so many independent bookings lately, he compared his current travel schedule to his WWE days. Which is not to say he’s complaining — in fact, the opposite is true.

“It’s great,” he said plainly. “I love doing these shows. I get to see a lot of guys and girls that I haven’t seen in a long time. As well, I’ve been able to see a lot of talent that I’ve never seen wrestle before. A lot of them have stood out to me.”

More importantly, though, working on independents lets Dreamer give back to the business. As a name wrestler, Dreamer’s appearance on an indy show helps draw fans to shows and expose them to younger wrestlers who are looking to make their own name in the business.

“It all starts at these types of shows. It’s funny,” he observed. “Life goes full circle. When I first started, (the independent shows featured) guys like Rick Martel, Greg Valentine, Tony Atlas, Honkytonk Man. They were the main events, and there were a lot of no-name guys who would wrestle and fill out the card. Now I’m one of those guys who has the name and there are a bunch of guys who the world hasn’t heard of yet. But when I was going through it, the no-name guys later went on to become Taz, Damien Demento, Bill DeMott, Devon Dudley, Bubba Dudley. Now, they’re all bigger stars. That’s just how the business is. It’s really cool to see who will catch the eyes of the fans.”

On Saturday, Dreamer will be wrestling one of Ontario’s best wrestlers in Tyson Dux, in Markham, Ontario. Though it will be the first time the two ever meet in the ring, Dreamer is quite familiar with Dux, going back to their previous crossings in Border City Wrestling and BSE Pro, the two legacy companies that have since merged to form Maximum Pro.

“When I first met Tyson, he did this funny little stupid dance,” he remembered, “and that caught my eye. But I always thought that he was a very good wrestler. When I had the job in WWE where I was the first line on the way to hire people, I gave him a tryout. I remember Tyson messed up his knee on his tryout, so he couldn’t… he didn’t get a job with WWE. But then he went on to TNA and got a nice little shot over there. I think he’s one of those guys that’s very, very talented.”

In addition to getting to wrestle some of the top future talent, Dreamer also enjoys the indy scene because it gives him a chance to help out a company that has potential but only needs a boost to take things to a higher level. He used the example of one of his personal heroes to illustrate his point.

“I remember what Terry Funk did in ECW. The guy was doing moonsaults to the floor in his fifties. He was helping put that company on the map. If (one of the wrestlers) comes through the curtain and asks me (for advice), I’ll be more than happy to give it to them. I just want to help””

Indeed, it was a sense that he couldn’t help WWE as much as he wanted to that led to his leaving the company.

“That was one of the hardest decisions I’ve ever had to make in my life,” he said. “I just wanted to contribute more to the business that I love so much. I don’t have bitter feelings towards WWE, and I love the people there. But I was no longer happy doing something that I love so much. I didn’t want to become a bitter veteran. I’m still a huge fan, and wanted to remain that way. Lately, I’ve been able to see that I still love the business.”

As much as that’s true, Dreamer also loves spending time at home, just being dad to his daughters. During this interview, he would occasionally excuse himself to attend to them (at one point, retrieving a ball that they had been playing with that had rolled behind a bush, and at another, ushering them inside the house to wash up for dinner).

“I like to sound cool and hardcore, but spending time with my kids is another reason why I left WWE. My kids are six now, and it was a lot harder to leave on longer tours. Back in the day, you know, I would be out partying and going out to all hours of the night. But lately, you find yourself going back to the hotel room and calling your daughters, or you find yourself looking at their pictures and crying in the hotel room because you miss them so much. So, basically, I’m being dad and hanging out with them, and loving every second of it.”

While devoting time to work and family might be enough for most people, it’s apparently not enough for Dreamer, because he’s also started with a few other endeavours.

“For the last year and a half,” he revealed, “I’ve been writing two movies. I’m just about to finish them. I’ve got some people who are interested in them, I’m trying to get them sold. Also, some people have been talking with me about doing the whole acting thing, which for some reason is a natural for a lot of wrestlers. I haven’t signed with anyone yet, but a lot of people have been giving me some decent representation offers. I’m playing the field, just having fun and doing some things that I haven’t done before.”

He’s also started writing a book about his life in wrestling, but is deferring this for the time being.

“I wrote three chapters when I was working in the WWE office, and I’ve broken down how I would like it to look, but I’ve put it on the back burner.”

The reason for the deferral? Essentially, it’s because he’s not sure he could be completely candid in the book, and he’s not willing to compromise the truth simply for the sake of getting something on the shelves.

“I don’t want to write a book if I couldn’t tell everything. A part of ECW was a crazy, crazy illegal time. I was never into drugs or anything,” he clarified, “but I did a lot of things that… I mean, we were crazy, and I don’t know the legal ramifications (about disclosing everything in print).”

Despite all of those side projects, Dreamer is clear that he has no intention to hang up the boots just yet. As noted, wrestling is his first love, and he said he can’t imagine giving it up unless and until he was absolutely forced to do so.

“I couldn’t picture myself doing anything else. It’s all I ever wanted to do since I was nine years old. I’m planning on doing it until my body just can’t do it anymore. Fortunately, I’m feeling really good. Honestly, the only time I ever feel the pain is when I’m flying. I’ve never even had a surgery. I joke that all of these muscular guys have all the tears and breaks. I guess that (my) fat absorbs everything,” he laughed.

The obvious question, then, particularly for an ex-WWE star still in the game, is whether he’d consider joining the TNA Wrestling roster. Some wrestling websites have speculated that Dreamer may go to TNA to introduce an “extreme invasion” type of storyline, possibly with Rob Van Dam, who recently joined the company, and another man that will be forever linked with the original ECW, Paul Heyman. Dreamer himself appeared to fan the flames of the rumours with a recent cryptic Twitter post.

“Twitter is an amazing phenomenon,” he said, discussing the gossip. “Jeff Hardy wrote something, basically saying that he was a dreamer and there’s got to be more out there. I responded to my friend’s tweet, and my phone blew up, with people asking if I was going to be on (that) night. All I did was try to help TNA out and get the word out that there show was on at a different time. That’s all that was.”

That said, he did confirm that he had been contacted by TNA, but his non-compete clause, which doesn’t expire until next week, precluded any discussion on the matter.

“They asked me when my (non-compete restriction) was up. I told them, and they said they’d contact me after that. Legally, that’s all that they can do.”

And once his non-compete is up? Would he entertain any offers at that time? According to Dreamer, he would consider it, but, echoing his earlier comments about his desire to help build up a strong company, would only do so if it meant he had the opportunity to help out in a meaningful way.

“I left WWE because I felt I wanted to contribute more. If I can’t contribute in TNA, I wouldn’t go there either. If I’m working – and I told this to Vince McMahon, I told it to Paul E., and I would tell it to Dixie Carter – if I’m working for your company, I’m working 24-7, and I’m giving you everything I have. If I can’t give that to you, or you don’t want it, I’m not going to work there.

With a work ethic like that, it’s no wonder that Dreamer has gained himself a very loyal fan base. But he actually prefers to think of it as a more of a mutually respectful relationship.

“I know it sounds hokey,” he said, “but I’ve always had such a great connection with the fans. People have come up to me and told me more stories about how ECW changed their life, or things that I did in my career, or they remember how I just went up to say hello to them. To me, that (stuff) is just really, really cool.”

”It all goes back to when I was a kid and I was a huge Bob Backlund fan, and he snubbed me when I wanted his autograph, and I hated Bob Backlund ever since, and I never forgot that. A lot of people have gone out of their way to tell me some nice things I’ve done for them, and I really appreciate that.”

Maximum Pro Wrestling will be running its “Spring Loaded” tour this weekend, as follows: Friday at Assumption College in Windsor Ontario, 7:30pm bell time; Saturday at the Markham Fairgrounds Livestock Arena in Markham Ontario at 5pm; and a Sunday matinee show at the Goff Hall inside the Woodstock District Community Centre in Woodstock, Ontario starting at 3pm.