Mat Matters: HBK’s retirement the end of an era

In the weeks leading up to WrestleMania, anyone with an internet connection and the ability to look up backstage wrestling news knew The Undertaker was going to defeat Shawn Michaels. When the retirement stipulation was added, we raised our eyebrows but figured he’d be back in time for Summer Slam in August. But now we’ve all come to the realization that “HBK” Shawn Michaels is truly gone.

Like Triple H said on Raw, it’s the end of an era. We are no longer living in an age with the likes of Bret Hart, Ric Flair, Curt Hennig, Scott Hall, Kevin Nash, Davey Boy Smith, Owen Hart, and now Shawn Michaels, providing our wrestling fix each week. Well, unless you switch to TNA, that is, but it’s kind of a sad sight. Shawn Michaels and The Undertaker represented that final tie to a golden age of wrestling. Both of them were bonafide superstars, the likes of which we will likely never see again. 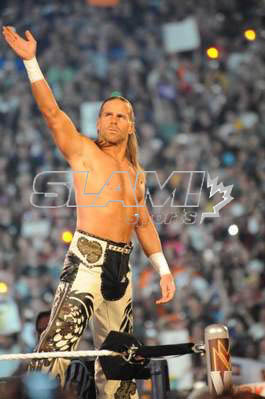 I remember being a young boy watching The Rockers. In fact, when I played minor hockey, our teams were named after tag teams in the WWF. I played for The Rockers. I remember how much I loved the energy they brought to the ring every night, and I remember how sad, angry, and confused I was when Shawn Michaels turned heel and threw Marty Jannetty through the Barber Shop window. I don’t think anyone could have predicted the singles career he would go on to have — otherwise I probably wouldn’t have been quite so upset.

The classic matches he contributed to the WWF/WWE library are unrivaled. Back when he was opening WrestleManias against the likes of Tito Santana or Tatanka, he sucked you right in and set the bar for the rest of the night. By WrestleMania 10, he was stealing the show. From that point forward, every WrestleMania he competed in, he was the star.

Who could forget his classic Intercontinental title match with The British Bulldog on Saturday Night’s Main Event? Or the first ever ladder match in the WWF with Bret Hart on the Coliseum Home Video Smack ‘Em, Whack ‘Em in 1992? What about his often overlooked classic with Mankind at In Your House: Mind Games in 1996? His back to back Royal Rumble victories in 1995 and 1996? His matches with Psycho Sid in 1996 and 1997? The Iron Man Match, the first ever Hell in a Cell match, I could go on and on and on.

Sure, when he came back to WWE in 2002, he wasn’t the same Shawn Michaels that left us in early 1998. He was a changed man and it hindered him at times, helped him in others. One thing is certain though — the “old” Shawn Michaels never would have lasted eight years. And the current HBK incarnation gave us a new volume in his library of classics. The wars with Triple H, the classics with Kurt Angle, the unforgettable Hulk Hogan match where he oversold everything — partly to make Hogan look halfway good, partly to jab at the fact that he was being forced to job to the Hulkster. The Montreal promo, the reuniting of DX, the WrestleMania 22 match where he somehow made a match with Vince McMahon the highlight of the show. And of course, the absolute classics with The Undertaker the past two WrestleManias, two of the greatest ‘Mania matches of all time.

Shawn Michaels was a once in a lifetime performer. And seeing him live was something extra special. He gave it his all whether he was on live television or wrestling in a house show in a match that would never see the light of day. I remember in January of 1997, the WWF came to town to film three episodes of Monday Night Raw at the SkyDome. They called the show “Triple Threat,” and it featured a main event of Shawn Michaels vs Bret Hart vs Psycho Sid. That match never aired on television, but I vividly remember Shawn Michaels leaping off the top rope, bumping around the ring like he was wrestling one of his WrestleMania classics, and ended up stealing the victory in front of a very pro-Bret Hart crowd.

Truly one of a kind.

So, who fills his shoes? The truth is, no one can. There are some good young wrestlers on their way up, notably John Morrison, CM Punk, and Bryan Danielson (Daniel Bryan). They all have their strengths, and they will all have their moments (especially Daniel Bryan, who is an incredible wrestler, and wouldn’t you know it, was trained by Shawn Michaels), but none of them will match the Heartbreak Kid. No one will ever be as controversial, as loathed and as loved, as exciting, as unforgettable as Shawn Michaels.

He represented a dying breed. The Undertaker and perhaps Triple H are the two that remain. And we are left to watch the new generation that will just never quite be the same.

Thank you for the memories, Shawn. You will not be forgotten.