A trip down AWA memory lane with Mick Karch

More favourably fortuitous timing, a bit of luck, and Mick Karch might have become a household name.

As it is, Karch became known as “The voice of Minnesota pro wrestling,” and his new three-disc DVD set, Bodyslams & Pinfalls, is a fun ride through his 30 years in and around the business. 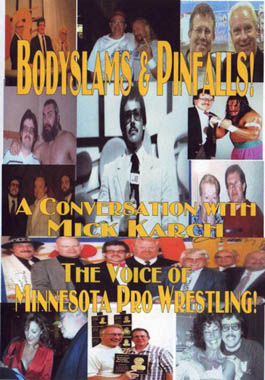 Before Karch proceeded with the shoot interview, he invited fans to submit questions for him to answer. He ended up getting deluged with about 400 replies.

“I had thought about doing this [DVD] for a long time. So many wrestling fans ask me about my TV show and the old AWA days,” Karch told SLAM! Wrestling. “I thoroughly enjoyed reliving the memories and I hope fans of both the ‘old’ and ‘new’ schools of wrestling will get a kick out of the stories, matches and promos.”

Karch is best known as the ring announcer and occasional colour man for Verne Gagne’s AWA in its latter days, as well as host of the local and popular TV program Saturday Night at Ringside, a.k.a. SNR, for four years.

Like so many who’ve worked in the business, Karch started out as a wrestling fanatic. As a boy, he spent weekends hanging out with a friend at AWA headquarters, the Dyckman Hotel, watching for familiar faces and getting the odd autograph. Then one day in 1965, he got his first gig with the AWA, running publicity to the Minneapolis Tribune‘s sports department for Wally Karbo. He would continue with the “errand thing” for the next eight years. Eventually, he began covering the AWA himself.

“In 1973, I started writing a wrestling column for two Minneapolis tabloids, The Daily American and Metropolitan Forum, and I covered strictly the AWA. While I wasn’t officially in the AWA’s employ during that time, I had their assistance and cooperation in putting the column together,” Karch said, explaining he had access to the talent. “In the late ’70’s, I started shooting ringside pics for Bill Apter and Pro Wrestling Illustrated, again with the full cooperation of the AWA. I actually starting working for the AWA as an announcer in the summer of 1987 and stayed in that capacity till March of 1988, when I started hosting the Saturday Night at Ringside wrestling block in Minneapolis-St. Paul.”

Karch’s DVD package is filled with funny anecdotes, like a young Karch asking Bobby Heenan about starting a fan club for him and Heenan basically telling him to beat it. Or a teenaged Jeremy Borash appearing on SNR and putting over the Honkytonk Man while calling Hulk Hogan “really pathetic.” There’s also indy footage of a very young Sean Waltman, Jerry Lynn, and Sabu, as well as Karch interviews with the likes of Bruiser Brody, Lex Luger, the Road Warriors, Baron Von Raschke, Mad Dog Vachon, Jim Cornette, Paul Orndorff, and Eddie Sharkey. 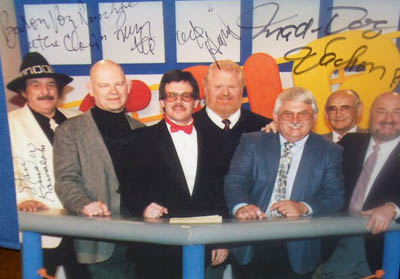 It also contains some interesting thoughts about where Karch might have ended up if the stars would have aligned differently. Apparently Paul Heyman thought of putting Karch in ECW’s broadcast booth until Joey Styles came along. Karch also had an opportunity to try out for the WWE, an offer he first declined, and then missed out on the second time over what boiled down to miscommunication and bad timing.

The DVD is $20 (U.S.), which includes postage. Besides selling copies at local indy shows, Karch also has the product listed at the Bodyslams and Pinfalls fan page on Facebook. Interested buyers can also send a cashier’s check or money order for $20 (U.S.), payable to Mick Karch. The address is Box 28064, Crystal, MN, 55428-0064.