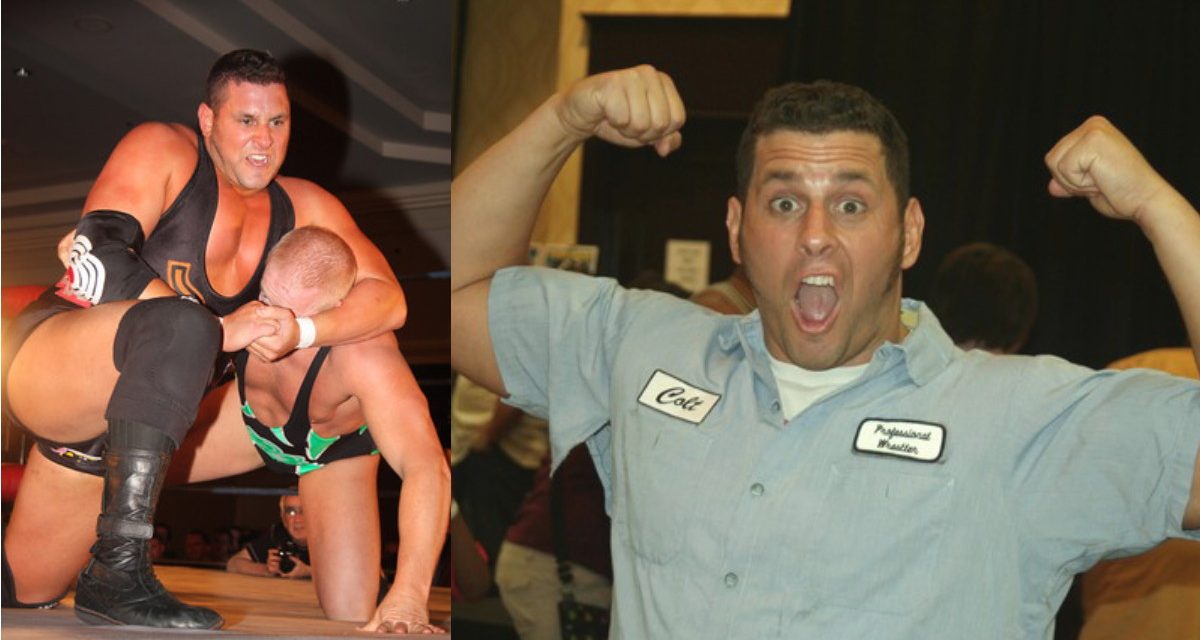 In addition to the numerous WWE events going on in Phoenix this weekend, a number of other wrestling-related alternatives are available for the fans. For those interested in some comic relief, Ring of Honor star Colt Cabana (known as Scotty Goldman during his recent WWE stint) and wrestling legend Mick Foley will be performing a stand-up comedy show at Arizona University’s Gammage Auditorium on Saturday night, the night before WrestleMania.

At last weekend’s Ring of Honor show in Mississauga, Ontario, SLAM! Wrestling sat down with Cabana (real name Scott Colton) to discuss the event, which is being billed as a night of Total Extreme Comedy.

“I’m really looking forward to it,” he said about the event. “It should be a lot of fun for the wrestling fans.”

Cabana knows about fun, as he is known for using a lot of humour in his matches. His character is one of the most beloved in Ring of Honor, and a lot of that has to do with his comedic mannerisms. It’s something that comes naturally to Colton, which is why he found the transition to stand-up fairly natural.

“I had just been fired from WWE,” he said, explaining how he entered the world of comedy. “SummerSlam was happening in L.A., and Joe Schmo, the promoter that we were working under, had an in at the Hollywood Improv, and he thought it would be a good idea for Mick Foley to do some stand-up on the Saturday night before the show. Joe came to me and asked if I wanted to do standup. I didn’t have any material, but I said yes. What a great chance. I had just been fired from my dream job. My creative juices were flowing. It was almost like I was wondering what I was going to be doing the rest of my life, so I thought it was a great idea. I had a couple of months in which to come up with some material.”

The task wasn’t as daunting as one might expect. In fact, during his WWE stint, Colton had actually been writing comedy for his WWE.com show Good as Goldman.

“They gave me a writer for the first one,” he said, cringing at the thought. “He was a 60-something-year-old dude who wrote for Monk and Jay Leno, and he would tell me this and try to impress me? Meanwhile, I was thinking, ‘I hate Jay Leno. This is not impressing me.’ He tried to write with me, and he just wasn’t funny. So from the second one on to the last one, I wrote my own stuff. I wrote it, and I produced how I wanted it to look, how I wanted to graphics to come in and what not.”

“So when I was thinking about the offer to do stand-up, I looked back and I realized that it was basically the same as the the dot-com show — I was doing jokes about wrestling. That basically gave me the confidence to do the standup.”

The Hollywood Improv gig ended up being a success, and soon Cabana and Foley started taking the show on the road. Performing on the comedy stage is always a thrill for Cabana after wrestling, and he’s glad to be able to showcase his humour chops to new audiences. Thought that’s not to say he would forego his wrestling career to do it full time.

“No, I don’t think so,” he said after little thought to the question. “Wrestling’s my dream, my number one. It’s the only thing I ever wanted to do with my life. Actually, what would be ideal is if there could be a big wrestling comedy extravaganza that combined both. I see these Lucha VaVoom shows and Mondo Lucha, and those have caught my eye. They’re a blending of wrestling and comedy and abstract. Obviously, it’s not on a national scale, so it’s not something you can do full-time right now. But that would be perfect for me.”

It’s likely that being in that kind of show would be more satisfying than his truncated time in WWE ended up being. In talking about his time there, Colton doesn’t come across as bitter, but rather just disappointed that he never really got the chance to show company management, and ultimately the fans, what he was capable of.

Despite having had over 11 years of experience before joining WWE, Colton had no illusions that he would become a superstar overnight.

“I knew I wasn’t going to be put on TV immediately, and that I would be going to developmental. After about eight months, that’s when frustration kicked in. I knew that I was ready, they just weren’t choosing me.”

Thanks to some advice from a colleague, it was then Colton realized that he would have to take proactive measures to help get him where he wanted to be.”

“Paul Burchill used to tell me how he would pitch ideas. And that was so weird, I didn’t understand, because I thought, ‘Isn’t that why they have a creative team?’ He said, ‘No, you have to pitch them ideas.’ So I started pitching ideas, sometimes three ideas a week.”

Eventually, one of the ideas — a WWE Talk Soup show — caught the attention of one of the company’s writers, and with some tweaks, the dot-com show was born.

“I think I got on the website because — and this is just my opinion — I think that the higher ups at WWE really didn’t care about the website. The young guys on the creative team thought they could just sneak me in on the dot-com show, even though nobody really wanted to do anything with me on TV. I think the show got better every week. It had a strong following, my blogs on WWE.com were getting more hits than Matt Hardy’s or Michelle McCool’s. I think they would have continued to get better, but obviously, it got cut short (with his release).”

After his release, it wasn’t long until Cabana re-signed with Ring of Honor. Returning to the company as a veteran — “I’m one of the elders,” he joked, “and I’m still in my 20s!” — Colton is glad to be able to showcase his in-ring talents on a regular basis with a company that he loves so much.

“It’s great being back,” he said, smiling. “I come back here, and it’s all my friends. What’s more, I feel I have the ability to be as creative as I want without any thresh-holds put on me. Not saying that people were keeping me down in WWE, but in that company, there are so many levels and layers before something gets to Vince McMahon, and usually it doesn’t get to him, especially if you’re a guy like me, with the status I had. Here, I have the confidence to go to Adam (Pearce, the booker) or Cary (Silken, the owner) and say, ‘This is what I want to do,’ and they say, ‘Of course, do what you want.’ That’s very thrilling for a creative person like me who wants to get my ideas out there.”

To help ensure the thrills continue, Cabana is hoping to use his comedy career to help build a bigger audience for the company.

“I want to use comedy to help my wrestling career. To help bump up my value as a performer where more people will see me and know what I’m bringing — for them to say, ‘Hey, I know this guy from this movie, or this show, or from doing good standup. Let’s go watch him wrestle.’ I’m hoping to take the audience from comedy and pull them over to wrestling. Vince McMahon does this all the time. He wants to pull the non-wrestling fan in to become a wrestling fan. I’m trying to do it by grabbing them at the comedy clubs. To say to them, ‘Hey, I’m funny here at a comedy show, come over and see me at ROH or watch ROH on TV. At least watch my match, you’ll get a kick out of it. You’ll laugh at my match, but then you’ll be amazed at (guys like) Davey Richards and Kenny Omega.'”

To that end, he draws on a lot of his wrestling background in his stand-up routine. While that is a large appeal for wrestling fans — who will likely comprise most of his audience this weekend — that doesn’t mean that non-wrestling fans won’t enjoy the show as well.

“Obviously, we’re piggy-backing this weekend from WWE. I mean, this weekend will be like Comic-Con for wrestling fans — this is our world. But even if it weren’t all wrestling fans, I would talk about wrestling in my act. Because that’s what I am, that’s been my life, and I have a great story to tell. I think right away I have something different to offer, because I was a WWE wrestler and I’ve traveled the world as a wrestler, and a lot of these guys haven’t. I have something that’s very bizarre and unique, and I think that will grab their attention. Then, the goal is to keep their attention after I’ve grabbed it.”

“But that’s not to say I only do wrestling punchlines. I use wrestling themes, but even if you were a banker, you could still see the comedy in the situation. I think that makes me stand out. I’m not saying that I’m the god of comedy, but eventually I would like to be, along with wrestling. Obviously, I need to work at it,” he laughed.

To order tickets for the show, go to www.ticketmaster.com. In a joint promotion with Ring of Honor, when ordering tickets, use the discount code ‘ROH’, to receive 15% off the ticket price.