George “Red” Eakin, a Winnipeg wrestling mainstay as a performer and a wrestler has passed away Sunday morning, February 21, 2010, after a lengthy battle with cancer. He was 81.

Eakin was an outstanding amateur wrestler, born on September 19, 1929 in Winnipeg, who first delved into the pro ranks in Winnipeg’s active club scene in 1952 for the Crescent Boxing and Wrestling Club’s summer match series at the North Main Drive In. Some of his earliest “semi-pro” successes took place under that club’s banner, where we excelled in both singles and tag team competition, forming a successful partnership with the popular Johnny DePaulo. 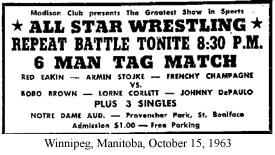 However, it was under Gordon Mackie’s Madison Wrestling Club banner that Eakin saw his greatest success. Between 1952 and 1968, Eakin wrestled 401 matches out of the club’s 632 events. More than 100 of those were in tag team action with frequent partner, Gus “Frenchy” Champagne.

Eakin did equally well in tag team competition, holding the Madison Club tag titles on six occasions — five times with Frenchy Champagne and once with Buddy Sprott, who is best known for his work internationally as Ricky Hunter (aka The Gladiator). 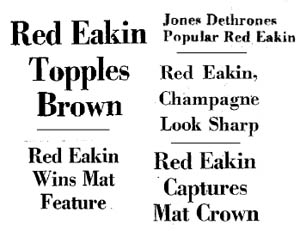 At 6’0″ and 218 pounds, his skills on the mat attracted attention and Eakin did train briefly with Verne Gagne in Minneapolis with aspirations of a full-time pro career. However, he was discouraged by the lack of job security, and with a career as a chartered accountant in Winnipeg, he elected to stay close to home.

For many years, Eakin served as a referee for the higher-profile cards promoted by Alex Turk.

In addition to his occupational and wrestling pursuits, Eakin is regarded as an outstanding football player and as a member of the Norwood-St. Boniface Legionaires, won the Canadian senior championship. George also served as a lineman for the Winnipeg Blue Bombers football club for many years.

Eakin’s last match took place in Brandon, Manitoba on November 15, 1974 when he teamed with a young Roddy Piper to oppose Joe Carona and The Scorpion.