Old favourites will be on hand this coming Saturday in New Jersey for the Pro Wrestling Hall of Fame’s third annual dinner.

Chief Jay Strongbow will attend as the guest honoree, with WWE Hall of Famer Howard Finkel serving as master of ceremonies. Mick Foley will also appear, both at the dinner and beforehand as he hosts the “Mick Foley Hardcore Backroom Sale,” where he will give away and sell loads of personal memorabilia. 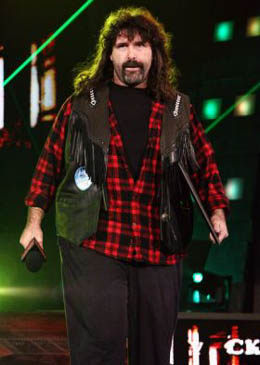 Want some of Mick Foley’s goodies? Go to the dinner! Photo courtesy TNAWrestling.com

“Mick called me one day and made the following suggestion, which was quite unique,” explained John Pantozzi, one of the men behind the dinner. “In the process of cleaning out his garage, he realized he had several hundred small items from his personal life and professional career. Mick made the offer to give away one item to each dinner ticket holder and also to sell some of the larger items to fans, with all proceeds going to the Pro Wrestling Hall of Fame.”

Six years ago, Pantozzi ran his first of three fundraising dinners in the New York City metropolitan area for the PWHF. Several years later, retired journeyman wrestler “Irish” Terry Gunn discovered that banquet halls in his home of New Jersey could be had for about half the price. And so started the Gunn/Pantozzi series of fundraisers.

“The entire event has always been fan friendly. Many of the wrestlers will take the stage to tell a few stories. A three-course meal will be served, and the fans will have full access for questions, photos and autographs with all the wrestlers in attendance,” Pantozzi said.

If Gunn is any indication of what to expect, then meeting and talking with the wrestlers should be a blast. Gunn can recall events from his career like those from a match just finished a minute ago.

IRISH TERRY GUNN — FROM RADIO TO THE BRIGHT LIGHTS

“Before I got into wrestling, right out of school, I worked for a radio company — WKER, The Mighty 1500,” he remembered, adding he grew up watching black-and-white TV matches from the Argentine Rocca-era and took in the occasional match with his father.

His break into the business came completely by chance. Gunn was preparing to head to a show in New Jersey, when he stopped to drop equipment off at his station. When his boss heard he was going to the show, he asked him to get some interviews for the station’s sports segments. Gunn agreed. When he got there, he showed his credentials and was told to go see a “Bob Marella,” a name he was totally unfamiliar with. The face, however, was a different story entirely.

“Walking into a room without realizing who’s in that room, and then seeing Gorilla Monsoon sitting there at the desk, your jaw kind of hits the floor,” he said.

After the matches, Monsoon asked the 6-foot-2, about 230-pound Gunn, a semi-pro footballer with fiery red hair, point blank if he’d ever considered getting into the pro mat game.

“Well sure, everybody thinks about it that watches it. But back then, it was easier to get into the FBI than it was to get into pro wrestling — you had to know somebody, you had to have pull somewhere,” Gunn recalled.

Monsoon gave him a phone number and told him to call him in a week and he’d see about getting someone to train him. Gunn ended up calling every week for about six months before a wrestler was tracked down who had some time — “Outlaw” Don Bass. Training with him would prove “very, very interesting, to say the least.”

“He was very intense. Back then, they would push you — if you had to do, let’s say a dropkick, he would have me dropkick 100 times. And then we’d go onto something else. And then three hours later, he’d have you do another 50 dropkicks. I mean, it would feel like your legs were going to fall off,” Gunn said. “And then the following day, you would go in and the first thing he would do is he would go over what you did the day before — throw a dropkick, an armdrag, get up and give me a hiptoss. And if you didn’t do it right, you went back and did another 100 dropkicks until you got it right.”

His first match before an audience came accidentally too, as Gunn filled in for a no-show at a WWWF card in a high school in Garfield, New Jersey.

“It turned out my very first match in the WWWF was a main event. To show you how green I was, I didn’t even realize this until on the drive home that night. I was hooked up with Rick McGraw as my tag partner and we went against a tag team that had only been in the area for a couple weeks and was tearing the place apart — The Moondogs. Unbelievable. You want to talk about somebody nervous? I’ll bet you I lost 10 pounds before I got into the ring. I was a nervous wreck. But it was great.”

“That was a tremendous match; lasted five minutes, 11 seconds and Yatsu beat me,” he laughed.

Gunn’s first TV tapings also proved highly memorable. On the first day, he took on one opponent per hour, starting with Killer Khan, then Sgt. Slaughter, and finally George “The Animal” Steele.

“The next morning, none of my body wanted to get out of bed. I mean, my hair hurt… I had bruises all over me — I spent more time in the air than most pilots that night,” Gunn joked. “Then the second night, we did TV in Hamburg, and I went in and my first match was against George ‘The Animal’ Steele again, and then Greg Valentine. It was a long week those two nights. I can remember driving home: ow, ow — it hurt to turn the blinker on — ow.”

Among the wrestlers he faced in his career who stood out the most for him were Don Muraco, “a phenomenal, phenomenal wrestler,” and Danny Hodge, who “enjoyed tying me up in knots… He was unbelievable. I wrestled Danny a couple of times and he was unreal.”

Altogether, Gunn wrestled about 14 years between the WWWF, Kansas City, Missouri, Arkansas, Alabama, and Tennessee: “And it was the best 14 years of my life.”

The evening takes place Saturday, February 20 at the Regency House Hotel (Route 23 North), Pompton Plains, New Jersey. Doors for Foley’s backroom sale open at 5:00 with dinner to follow at 7:00, and the evening will also feature a Chinese auction and a 50/50 drawing. All proceeds go directly to the PWHF.