Morasca has put wrestling behind her

Although her wrestling career was a short one, Survivor: Amazon winner Jenna Morasca, gained a new respect for those who make their living in the squared circle.

“I would definitely do more movies but, not so sure about wrestling,” she told SLAM! Wrestling while promoting the new Survivor installment — Heroes Vs. Villains, which debuts Thursday. “Wrestling was a positive experience. I had a really good time but it is obvious that the talent there works so hard for their whole lives to do what they do.” 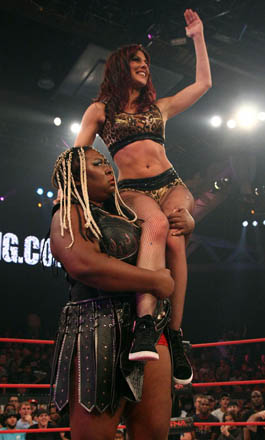 As fans might recall, the former Playboy centerfold joined TNA Wrestling last year as the benefactor of The Main Event Mafia. Morasca began working a program with Mafia valet Sharmell (Sullivan-Huffman), the wife of Booker T. The feud led to a grudge match at the Victory Road pay-per-view. Morasca won her in-ring debut but was pancaked by Awesome Kong after slapping her. That was Morasca’s first and last match in TNA. She parted ways with them shortly thereafter.

Morasca says one reason for her decision not to return was the dedication that goes into being a pro wrestler.

“I cannot go back in time and put that level of work into that profession. They dedicate their whole life to that craft and I haven’t and cannot do that. It is a different mind-set,” she concluded.

Although it won’t win an Oscar any time soon, Morasca admits she enjoyed working on the End Game film with TNA superstar Kurt Angle. Directed by Bruce Koehler, the film starred Angle as a deranged and sadistic serial killer who stalks Morasca after killing her friend.

“Kurt Angle is really great to work with. He is a hard worker. He’s a great villain. He’s a good guy in real life, too. I enjoyed working on the film a lot,” she said. 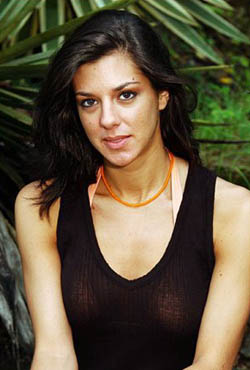 Having bowed out of Survivor: Heroes Vs. Villains in order to be with her boyfriend, Survivor: Africa winner, professional soccer player and philanthropist, Ethan Zohn, who is battling Hodgkin’s Lymphoma, Morasca is still thankful for all of the opportunities that have come her way.

“I am lucky. Every day, I am thankful for everything I have and all of the opportunities I might never have gotten if I wasn’t on Survivor. To think of all the things I have been involved with since being on the series is mind-boggling,” said a grateful Morasca.