For any radio show, regardless of the genre, to last eight years is a tremendous feat; but to do so under the conditions that Monday Night Mayhem has done and to not only survive but excel, is nothing short of phenomenal.

The show, hosted by John “The Big Mosh” Masiulionis, Todd Espinosa (or Todd Vincent as he goes by on the show) and Eric “Blade” Haber, celebrates its eighth anniversary tonight, and it has been an interesting adventure to get to where the boys are today. 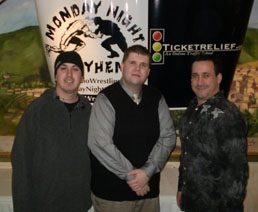 The show began way back when wrestling was still a mainstream sensation and had enough of an audience that the demi-sport could be found on dedicated shows on broadcast radio throughout Canada and the U.S. It was on this platform that Masiulionis, who has a broadcasting degree from Buffalo State College, began the show. Just a couple years into the broadcasts though, the show was removed.

It was then that Masiulionis chose to head to the Internet with the show, and thanks to hook-ups he has made with advertisers, Monday Night Mayhem has been able to continue and succeed on the ‘Net.

“When our near three-year run on WBNY ended in November ’04, we were faced with a tough decision…finding a way to ensure the program’s long-term viability or fold-up shop,” Masiulionis says. “With the incorporation of several sponsors since that point, we have stayed the course…and become a proven commodity.”

This legitimacy has helped Mayhem secure some incredible guests over the years, reaching wrestling personalities that most shows, and websites for that matter, have been unable to secure interviews with. Names like Hulk Hogan, Eric Bischoff, Bret Hart and Goldberg, while also hosting current WWE stars like Beth Phoenix.

Perhaps what has given the show the most credibility though has been its ability to not only bring on these guests, but also becoming the audio home to some names in the industry. Among these guests are former WCW broadcaster Scott Hudson, one-time ECW referee Jim Molineaux and past head of WWE security Jimmy Noonan. Additionally, the show has recruited some strong names from across the Internet wrestling community like “Wild” Bill Brown and Graham Cawthon to be part of their broadcasts.

It is this network that has set Mayhem apart from a lot of startup shows which have flooded the ‘Net in recent years. Masiulionis remarks that getting a successful show going isn’t as easy as some may think.

“We respect anyone who wants to get into the genre of wrestling radio, but there are unfortunately people out there who think that by having a laptop computer and a headset, they can become an ‘overnight sensation,'” he says. “So many pretenders out there think it’s that easy…it’s not. After eight years, the show (and myself personally/professionally) are still growing and learning.”

So what is the key to success then?

“You have to be able to maintain a balance of dedication and persistence, along with establishing the right contacts, and hope for plenty of luck around the way,” Masiulionis advises. “[I’m] not saying it’s not possible, but it’s taken us almost a decade to get respect from most wrestling entities… Reader’s Digest version: Put on the Sanka and hold on tight.”

Of course, after being in the biz for eight years, one would expect that a few shows have been more memorable than others, and indeed, each broadcaster has their own favourites; but some are interviews that you might not expect to hear. Masiulionis points to an interview with Chavo Guerrero Sr. as being one of the best in Mayhem’s history.

“He has been a great friend over the years, and we finally met up personally with one another years ago at the ill-fated Dream Reunion Convention in Kokomo, IN, and he is one of the most forthright, honest individuals I have had the chance to speak with,” he remarks. “The Guerrero name has a wonderful legacy and lineage, and Chavo’s passion truly echoes in the responses to any of his questions we have asked him over the years. Our relationship has grown to the point we chat regularly over non-wrestling affairs; from being colleagues to friends.”

Among Espinosa’s favourites — former WWE broadcaster Mike Adamle. “I must admit, I didn’t know what to expect with this one and didn’t have high hopes going in as my only impressions of Mike were based on his on-air WWE character,” Espinoza says. “I remember feeling a complete 180 degree shift in my opinion while we were doing the interview as Mike was very open and forthright and nothing at all like his ‘WWE announcer’ character.”

“It was cool to have on two of the hottest guys in WWE last year when RAW came to Buffalo,” he says. “WWE for the most part does not work with Internet shows but MNM has transcended that label.”