John Morrison looks back at his early days

The upcoming DVD, John Morrison: Rock Star, takes an interesting approach in its documentary on the subject — it ignores his history as Johnny Nitro. However, in conversation, Morrison is more than happy to talk about his early days, even before his stint in the successful tag team MNM.

For one thing, Morrison — real name John Hennigan — shot down one of the myths perpetrating on the web about him having trained at the Los Angeles XPW Academy.

He didn’t train with the hardcore company, but rather Supreme Pro Wrestling, in Sacramento, California. 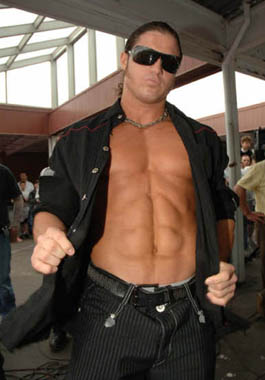 Johnny Nitro shows off the goods in 2007. Photo by Mike Mastrandrea

“That’s where I trained before Tough Enough. It was about 20, 25 minutes from UC Davis (University of California at Davis), where I was in school at the time,” he told SLAM! Wrestling.

Morrison was at the University of California at Davis for film, having bailed on a degree in geology already. He saw the first season of Tough Enough, and thought he could do just as well as those competitors. So he sought out some local training.

Some of the people who taught him included Big Ugly J.D. Bishop, El Fronto Loco, and Kryponite. “There were a bunch of other guys, but those were the guys that really showed me the ropes,” Morrison said.

In that third season of Tough Enough, Hennigan was a co-winner of the competition along with Matt Cappotelli. They were both dispatched to the WWE-affiliated developmental territory of Ohio Valley Wrestling, where they spent a lot of time together, in and out of the ring.

Just before being brought up to the main roster, Cappotelli was diagnosed with a grade 2/3 astrocytoma in December 2005. Three months later, he announced that he had a cancerous brain tumor and surrendered his OVW Heavyweight Championship. Surgery followed in May 2007.

“I had lunch with Matt two days ago, no, three days ago, on Monday,” he said last week. “He’s doing real well, considering all things. I’m still really close with Matt. He’s one of the most positive people that I have ever known. It’s great that he’s so positive because of all his difficulties health-wise, luck-wise.”

There are times that Morrison mulls over the ‘what if?’ of it all.

“We still talk about it, the possibility of him coming back,” Morrison said. “I think it would be awesome if he did, but it’s only if his health issues permit him to. He’s one of the most natural and charismatic babyfaces that I’ve ever had the chance to work with or be around. I always think it’s a real shame that he never got a chance to show that to a bigger audience, and tell his story on the biggest stage of them all, which is World Wrestling Entertainment.”

After a long run as a heel, Morrison is one of the lead babyfaces on the Smackdown roster. Some have noted that he is not a natural babyface in the same vein as a Ricky Steamboat or a John Cena.

“I think the perception is that way because I was a heel for five years, my whole career. I’ve only just recently been a babyface,” he said. What am I now is I’m a lot more of myself than I am when I was a heel. People that know me in my personal life generally think I’m a real nice guy, and I hope they’re not just saying that.” 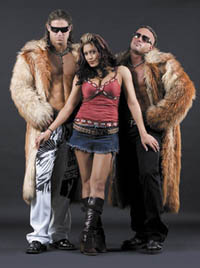 He considers the switch from Johnny Nitro to John Morrison a better representation of himself and his interests, just as he considers being a good guy closer to his real personality.

“For the most part, being a babyface, definitely, I can actually be more of myself than I could, and let people in, which is what I like to do in real life, rather than push people out,” he explained.

The confidence in his persona was certainly evident during his successful championship pairing with The Miz. The duo had a hit at WWE.com as well with The Dirt Sheet.

Morrison credits his background in film for part of the success of the mini-shows. The two of them actually wrote the show every week, and had to think a lot about it. 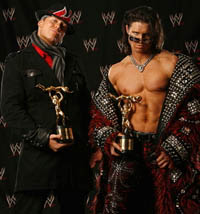 The Miz and John Morrison.

“You could have the greatest idea in the world, but if it’s not possible to shoot, edit, and turn it around and have it posted on WWE.com in a two-to-three day time span that it takes for it to happen, then it won’t actually materialize,” Morrison explained. “So you’d think of a cool idea, think of ways to actually get it done, and then think if it is actually feasibly possible to be shot, edited and put up based on your resources, and you’re supposed to be creative, and think about things like your camera shots, editing and post-production. So it was one of those cool things for sharpening all those skills.”

Morrison’s mental skills were on display recently as well, while a participant on Are You Smarter Than a 5th Grader? appearance.

He definitely wants the chance to try other things outside the ring, but it’s not his sole focus or obsession.

“I absolutely enjoy the other opportunities,” he said. “Are You Smarter Than a 5th Grader? was really fun. Jeff Foxworthy made the whole thing fun. Those kids were really cool. Other opportunities are just that, though. They’re always just going to be a side to my wrestling career. I’ve pretty much realized and decided that there’s nothing as much fun for me as sports entertainment. So all the other opportunities and side activities are, for me, always going to be just that, something I do on the side for fun. The best thing of working for World Wrestling Entertainment is just that, being able to perform in front of the WWE Universe. I want to do that for as long as I possibly can.”

Greg Oliver makes no claim to being smarter than a 5th grader, a rock star, or “The Shaman of Sexy.” But “The Guru of Greatness” does have a nice ring to it. He can be emailed at goliver845@gmail.com.