WWE’s A New Day CD a new mess for listeners

WWE’s latest theme music CD, WWE The Music Vol. 10: A New Day, is a 14-track disc of the newest wrestler’s themes and, unlike most of WWE’s past music CDs, this one is below-average. 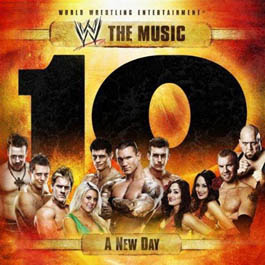 This CD is an Amazon.com exclusive and is available as a CD or as an album download. That’s a plus, but the contents of the CD lack in originality.

For instance, the new Bret Hart theme, “Return The Hitman,” is simply a remix of his theme from the 1990s. And The Hart Dynasty’s song, “New Foundation,” not only has the name of an old tag team from the ‘90s, but is again, just a remix of Bret’s old tune.

Ezekiel Jackson’s theme, “Domination,” is nothing more than a remixed version of the Brawl For All theme, but with lyrics.

Yawn. I guess the WWE “creative” team didn’t collaborate with Jim Johnston on this project.

That said, there are some solid tracks on A New Day, including Christian’s “Just Close Your Eyes,” Sheamus’ “Written In My Face” and Legacy’s new “It’s A New Day.”

Zack Ryder’s theme, “Radio,” is boy band-esque and pretty much shows how out of tune with pop culture the WWE is. Same with Dolph Ziggler’s “I Am Perfection.”

What’s ironic, too, is that Legacy is prominently featured and it appears that team is seeing its final days together. Same with Chris Jericho and The Big Show, whose “Crank The Walls Down” is the final track on the CD.

And of course, no WWE production would be complete without a Divas presence. The Bella Twins’ “You Can Look (But You Can’t Touch)” and Tiffany’s “Insatiable” make the cut here. Now let me ask this: How many current WWE fans even know what “insatiable” means?

In an odd note, a jobber’s theme is included as Evan Bourne’s “Born To Win” is included. Should be called “Born To Job.” Win? That’s funny.

Filling out the rest of the CD are themes from The Miz and Primo. Yeah, Primo.

I would have added tracks for Yoshi Tatsu, Tyler Reks, Mark Henry and whatever the latest theme for The Undertaker is.

Essentially, A New Day is far from a good showing from WWE and the company will be lucky if it sells 1,000 copies. In all fairness, their CDs never really do well financially, but WWE could have at least tried with Vol. 10 and made it something to remember.

Track listing for WWE The Music Vol. 10: A New Day