When Smackdown vs. Raw 2010 was announced, there was only one thought that came to my mind — make a better game for Wii.

You see, despite Nintendo’s fifth gen console having immense popularity, the system lagged behind Xbox 360 and Playstation 3 in capabilities for the past couple titles. 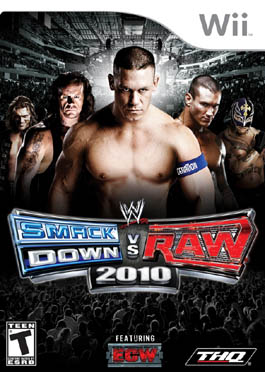 This time around, there are a few more equalizers, however, as the developers at THQ and their partners have amped up the Smackdown vs. Raw series entry.

The first thing that gamers will notice when they pop in the game disc on Wii is that there have been a bevy of match options such as the Elimination Chamber. This is a great improvement and now leaves the Wii console game on-par with the other fifth-generation games.

Also where Wii seems to have avoided being placed on a second tier is in the creation aspects of the game. Storylines, finishers and the always popular (and beautifully revamped) create-a-wrestler options are all here. After playing around with each for a while, I found that these modes are pretty thorough. Though there are natural limitations to the number of moves you can create, there are more than enough to give each of your created characters a fancy finisher.

Another bonus is the number of unlockable characters in the game. Perhaps due to the relationship that Smackdown vs. Raw collaborator Jakks Pacific has with many former WWE stars, several names from the past make hidden appearances here. I won’t reveal any of the names here, but let’s just say that the CRTC would have no problem with the Canadian content here.

Add to these factors are graphics and sound that somehow improve on what has already been done. I don’t say this sarcastically at all — I honestly felt like THQ and company couldn’t make the digitized wrestlers any closer to their real-life counterparts; but somehow they bested this belief and made the characters look more realistic than ever before. And to think at one point I thought No Mercy had real-looking wrestlers.

So with all that said, one would probably think that I’m throwing my full support behind this game, right?

You see, there’s one major flaw that Smackdown vs. Raw 2010 has, and that is simply that THQ has all but done away with the functionality of the WiiMote and Nunchuck. I’ll be the first to admit that there were flaws with last year’s control system (such as some of the moves that required you to turn the WiiMote that would be misinterpreted by the sensors as being a different maneuver), but removing the uniqueness of the Wii strips it down. At the very least, THQ could have kept in the taunts or given gamers the option of switching back to last year’s controller settings.

As is, the game would be infinitely easier to play if you were to pick up one of the classic Nintendo controllers that are on the market. For whatever reason, the Wiimote wasn’t all that friendly to simultaneously pressing the A and B buttons, which meant that executing stronger grapples or finishers were tough at times.

At the end of the day, I’m inclined to recommend Smackdown vs. Raw 2010 for Wii, but with the cautionary proviso that when doing so, fans should ensure that they have the classic controllers, because if not, you’re bound to be frustrated.