Petey Williams is at a crossroads in his wrestling career. He was released from his TNA contract at the beginning of 2009. Williams has been filling his time working as a personal trainer during the week and independent shows on the weekend.

Despite receiving little warning from TNA that his contract would not be renewed, Williams does not seem bitter but is still confused why he was released. 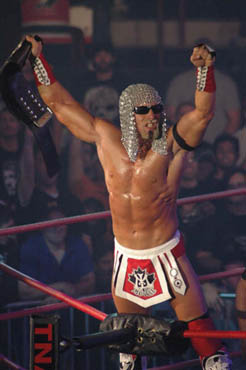 Petey Williams channels Scott Steiner near the end of his TNA run. Photo by Mike Mastrandrea

“My contract was up for renewal in January 2009 and everything seemed to be going well,” Williams told SLAM! Wrestling at a recent show. “Out of the blue, I received a call from head of talent relations for TNA, Terry Taylor, saying my contract was not going to be renewed. I still don’t understand why the contract was not renewed. It may have been a money issue since I was the highest paid guy in the X Division. They also mentioned freshening up the roster but I am one of the youngest guys so that doesn’t make sense. I guess more than anything, I would like an explanation why I was released.”

Williams still credits TNA for giving him his first big break in professional wrestling. “I was always treated well in TNA. I treated it like a job and I think they appreciated that. Whether it was dying my hair for the Steiner angle or getting shot with a paint gun, I was willing to do it.”

Speaking of Scott Steiner, Williams only has positive things to say about Steiner and the “Little Petey Pump” angle. “I know Scott had a reputation for a short temper and playing practical jokes on the guys. With me, he was always very friendly. I learned a lot from wrestling and traveling with him. Perhaps he is just mellowing with age.”

Even though Williams has not been wrestling with TNA, he has filled his calendar with dates in Japan and independent shows in North America. “I have been busy doing a tour of Japan. It is fun to wrestle there because wrestling is still treated as a sport. There is more respect towards pro-wrestlers and to pro-wrestling in general. I have also been doing a couple of Ring of Honor shows and independent dates across the United States and Canada.”

Williams has also been busy trying to break into the music scene. “I am in a band with the Motor City Machine Guns called The High Crusade. I play guitar, Alex Shelley sings and Chris Sabin plays bass. We have been in the studio trying to put together a few songs.”

On another career note, Williams recently received his personal training certification. “I have been working out for most of my life and it feels gratifying to help people achieve their goals.” 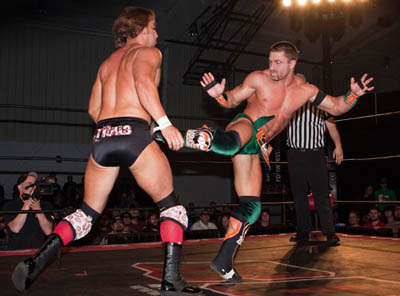 Petey Williams lays one into Rhett Titus at the Ring of Honor show on Saturday, September 19, 2009 at the Frontier Fieldhouse in Chicago Ridge, IL. Photo by Ricky Havlik, RickyHavlik.com

It may be possible that wrestling fans will only be able to see Williams in the gym or on the music stage in the future. “I am at a point in my life where I am looking for a stead paycheque. I was married last year and we would like to have kids. I love wrestling but it doesn’t provide a lot of stability.”

Williams puts to rest the internet rumours that he was or is WWE bound. “My agent had some discussions with the WWE earlier in the year. They would probably want me to sign a developmental contract and then move to Florida. If I had the same offer five years ago, I would have agreed. Now that I am married with a mortgage, it changes things.”

Fans of Petey Williams will still have a chance to see him wrestle. He is headlining a show in Ottawa for C4 Wrestling on November 21.